The second season sees the flock of daydreaming birdies venture far beyond their backyard and into the piggies’ natural habitat, Pig City, where they must make new friends, get jobs, and try to stay out of trouble. 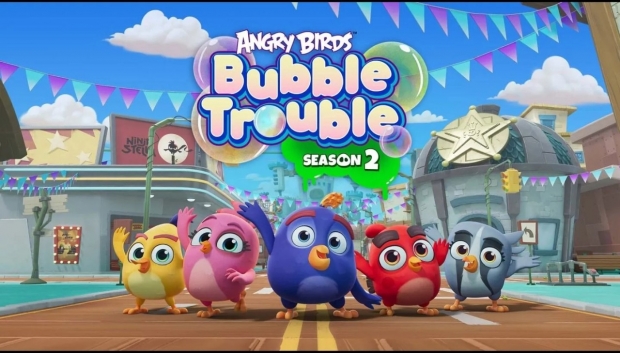 Rovio just announced that the daydreaming birdies are back for a second season of fun, games, and playful adventures-- Angry Birds Bubble Trouble Season 2 premieres on the Angry Birds YouTube Channel December 10th!  This Saturday, you can tag along with the flock in a new set of 28 one and a half minute adventures.

The first season premiered in 2020, inspired by the characters in Rovio Entertainment Corporation’s Angry Birds Dream Blast game. The short-form animated series took viewers to a magical bubble garden where the birds were free to live out their whimsical childhood adventures, far from the bird vs. pig mayhem taking place elsewhere in the Angry Birds world.

In Season 2, created in collaboration with Red Animation Studio, the flock leaves the safety of their bubble garden, and finds themselves faced with life in the big city. Thrust into the center of a bustling metropolis, the birds must learn how to make new friends, earn an honest living, and try to stay out of trouble in a city so full of pigs – it’s called Pig City. Birdies Red, Bomb, Chuck, and Stella all return for season two in addition to new piggy characters, even coming beak-to-snout with her royal highness, Queen Pig.

Red Animation Studio CEO Milton Guerrero stated, “For Angry Birds Bubble Trouble Season 2, we created a whole city! Streets, parks, forests, and a castle, as well as new characters with vibrant colors and textures with a ‘painted’ finish. The animation style is snappy, 2-frame 3D, with key poses and breakdowns created by 2D animators integrated with 2D Animation and VFX.”

“This season is even more visually appealing than Season 1, and a big thanks for that goes to the Red Animation Studio,” said Rovio’s Head of Brand Licensing Hanna Valkeapää-Nokkala. “The series was created with a mix of 2D and 3D and the ‘daydreaming’ sequences Red Animation created partly in 2D are really beautiful. Also, one special thing about this series is that one of the episodes features actual products from Venum, our consumer product licensee. The episode will feature Angry Birds boxing gear for children from their latest collection. It’s great that we can tie this partnership into the series and encourage kids to get active and find a positive outlet for their emotions.”

Distribution will be handled by Rovio partner, CAKE Entertainment.