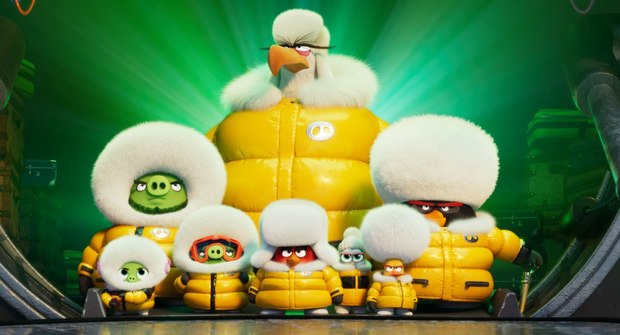 As the production designer on both The Angry Birds Movie and The Angry Birds Movie 2, Pete Oswald knows a thing or two about… well, about angry birds. And piggies. Which is to say, he’s had a bit of practice creating a fun and engaging sense of design, color, lighting and scene composition for a pair of animated films based on the minimally designed 2D characters from Rovio’s hugely successful Angry Birds mobile game franchise. As in all animated feature film sequels, the filmmakers’ main challenge is to return an audience to a comfortable and enjoyable place without boring or underwhelming them with “been there, done that” sentiment.  “I’ve had the opportunity to work on both films, so I've kind of seen how the production design needs have changed, moving from the first film to the sequel,” he explains. “The first film was really about bringing the game to life. Then, the sequel was a great opportunity to expand the universe, introduce new characters and do something unexpected and enterprising. Is it going to be more of that game play battle-type stuff? We wanted to do the opposite. We wanted to make the film feel unique.”

In Angry Birds 2, former enemies, angry birds and piggies, must work together, forging an unsteady truce to save their homes from a common threat, the gangly ice queens Zeta, played by Leslie Jones. Tired of her frozen Eagle Island digs, Zeta is determined to make both Bird Island and Piggy Island her new tropical paradise. “I love the fact that the birds and pigs have to team up together to fight this new villain Zeta, who lives on frigid Eagle Island,” Oswald says. “It was a great opportunity for comedy and to open up a new island in the Angry Birds world.”

New villain, new action setting and new designs means a new set of challenges. According to Oswald, “The biggest obstacle in creating the sequel was creating Eagle Island. It was our main new set piece, home of a new villain, which we wanted to build off from the first film. Whenever we're designing an environment or location, we want it to be connected to a character, and for Eagle Island, it was connected to Zeta's motive, which was getting off this frozen island. She wants to live in a tropical, beautiful place like Bird Island or Piggy Island. When we designed Eagle Island, we knew it had to be icy and cold, and her desire to leave had to come through visually.” But this being the world of big studio animation, even returning to locations from a previous film means assets must be updated, refreshed and somehow changed, even subtly. “For stuff we had from the first film, we tried to make it feel like it was a bit updated,” Oswald shares. “Even with the stuff on Bird Island that was reused from the first film, which was quite a bit, we wanted it to feel like time had passed and there was an update to their world. For example, on Bird Island, now they’re using slingshots as their main method of transportation. That wasn't part of the first film. They had a slingshot, but now it's part of their everyday use, almost like a subway station. They stand in line and then take the Blue Line, the Yellow Line, the Green Line or whatever. We updated what we had on the first film to bring the audience a new experience.”

Zeta, the film’s villain, is a new character that presented a unique set of challenges. “It was definitely a challenge creating Zeta, getting her design down as well as her lair… her apartment, so to speak,” Oswald described. “Once we kind of figured out who she was, and what type of villain she was, everything else started to fall into place. There was a lot of back and forth involved. Francesca Natale, our talented character designer, designed Zeta and did this amazing job creating a uniquely threatening, yet a very likable comedic character. Her living space had to tie into what her character was about. Her main motivation is to live on this tropical island, and she's transformed her ice cave into what she thinks is a tropical world. So, she has a swimming pool that's frozen over and a waterfall, tiki bar and palm trees all a carved out of ice.” As a production designer, Oswald’s role has many facets. “As the film’s production designer, I worked really closely with the director, Thurop Van Orman, and the producer, John Cohen, on creating the world, the characters… basically everything,” he reveals. “My talented team and I had to create everything from scratch. That means the props, the visual styling of the overall film, the color, the tone, color script and figuring out tonally how we're going to play each scene. Basically, everything that you see on screen, we’re responsible for.”

In the early stages of the film’s production, Oswald spent time away from the computer as he tried visualizing and designing some of the film’s new environments. “Early on, we tried to get away from our computers when we were figuring out Eagle Island,” he says. “We started making structures out of toothpicks and Popsicle sticks. This whole project was digital, right? So, we spent a lot of time in front of the computer. But I thought it would also be nice to get away from technology and do something more tactile. Though the structures we built really early didn't make it into the final film because of story changes, they did inform us a bit about how a bird would make something that felt like it came from their character. It was nice to kind of do that in the beginning.”

“But then as the story really got honed, we would do concept paintings, get feedback, update them and get more feedback,” he continues. “It was this constant back and forth with the director and producers to settle on our designs.”

Early design work also involved extensive research and reference material review. “We always start the design process with a lot of reference,” Oswald notes. “We looked at a lot of photographs online, places like Iceland… the hotels in Iceland, that type of thing, specifically for Eagle Island. It’s important to root your design in a natural, relatable concept but then twist it and make it feel unique, new and unexpected.” “If you design a place that doesn’t feel real, that’s totally alienating, then the audience isn't going to connect with it, and the comedy is not going to play,” he shares. “Ultimately, this is a comedy, and we wanted set pieces and characters to perform that comedy. So, we started with natural photographs and then did our own take on things to make it feel inventive.”

For Oswald, the inherent difficulties and challenges he faces working on films like Angry Birds 2 are well worth it when compared with the net result of all that effort: a theatre full of happy people. “I was very lucky to work with such a creative crew on this film,” he concludes. “As you know, animation is a collaborative process. Compared to other work, it's a marathon, not a sprint. It’s really hard. Working day in and day out with so many talented, creative people, that's the best part of this whole process. And then, sitting in a theatre, watching people enjoy the film, seeing them laugh, that takeaway makes me feel really good. Watching people enjoy our work is a magical thing to experience.”