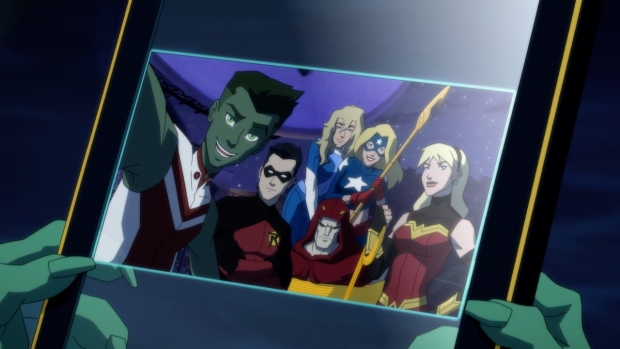 The DC Universe has produced a lot of teen and young adult-focused hero shows, from Teen Titans to Legion of Super Heroes. But the Emmy Award-winning Young Justice, now in its fourth season and currently airing on HBO Max, still found a place to belong – and shine - in a long line of successful series.

“We decided that this was going to be a show about teenagers first, a spy show second, and then a superhero show kind of a distant third,” says Greg Weisman, executive producer and showrunner with Brandon Vietti on the series. “Instead of making it about five characters in a tower, with no sense of where they'd come from, or who their family was, we really got into their backstories. It's a spy show, so we thought, ‘What if we make this about secrets and lies? And what if this is a show that encompasses the entire DC Universe, but just from the point of view of these younger heroes?’”

And that became Weisman and Vietti’s show. Taking place in an alternate DC universe known as Earth-16, Young Justice follows the lives of teenage superheroes and sidekicks - such as Robin, Kid Flash, Aqualad, Superboy, Red Arrow, Miss Martian, Artemis, and others - who are part of a covert operations group attached to the well-known Justice League. In this world, superheroes are a recent phenomenon, and supervillains have begun conspiring together on behalf of a group of key baddies known as The Light. The newest season, Young Justice: Phantoms, which proceeds Young Justice: Outsiders, began airing episodes in October with one episode releasing weekly every Thursday through December 30. The series is produced by DC Comics and Warner Bros. Animation.

“We've tried very hard every season to give each season its own unique voice,” says Vietti. “Greg and I both like shows that reinvent themselves while also respecting everything that came before, so that you still get the show you love but with a slightly different flavor than the season before.”

He continues, “There's an evolution that's happening through the show that echoes exactly what we're trying to do with the evolution of our characters. With our fourth season, I think the biggest thing fans will notice, and have begun to notice, is that we are creating arcs with our stories. And we're giving our core characters from Season 1 their own space to tell a larger and more contained story in small arcs as the season progresses. And this allowed us to try some different things with story structure that we've never done before. I can't reveal all those things. But as the structure continues to unfold through the season, I think fans will start to see what we're doing and hopefully be entertained.”

Since it first premiered in 2010, Young Justice has been making waves in the superhero spheres for its originality and mature storylines. It’s hard to believe Weisman and Vietti - both amply experienced in superhero shows such as The Batman and Spider-Man the Animated Series - were highly opposed to the idea of the show at first. “Going back to 2009, Brandon and I had been teamed up by our boss Sam Register [President of Warner Bros. Animation] to develop one show that didn't go and then another show that didn't go and then Sam suggested Young Justice, and our immediate reaction was ‘No,’” says Weisman. “At the time, Teen Titans and Justice League Unlimited had just finished up and were very much in everyone's minds. And they were great shows, very different from each other and seemed to cover that territory between them. And we were like, ‘What would we do that would make this different?’

It was Vietti’s idea to make the series into a spy show rather than primarily a superhero series. That, according to Weisman, got the gears rolling and was the start of a revolutionary show in DC’s television arsenal.

“As always, the best idea comes from Brandon,” says Weisman “And when you throw in on top of that the art styles of Phil Bourassa, who was our original character designer for the first three seasons and the art director last season, it really felt like, suddenly, we had our own space, or could carve out our own space and have a fresh take on all this.”

While the spy angle certainly got production off the ground, both showrunners say it was their team’s commitment to adding “heightened realism” that had never been seen before in a superhero series that gave Young Justice its notoriety.

“Greg, Phil, and I sat down at the beginning and together tried to come up with different textures that would add to the reality that we were trying to depict on screen that would help separate us from the great superhero shows that came before us,” says Vietti. “We knew that we wanted to tell the story in a very realistic way and wanted our audience to feel time passing. We wanted to age the characters as we went. That’s when Greg came up with timestamps, tracking real time through every episode, through every season.”

“Which is something I've regretted ever since,” jokes Weisman. “There's just way too much math involved. But I do think it helped the show.” Vietti and Bourassa did their part in making sure that, from Season 1 through Season 4, each character also had their own unique wardrobe and didn’t look like every hero and villain in the show, as Weisman puts it, “shopped for their costumes at the same store.”

“But we’ve actually moved a little bit away from that very consciously,” he continues. “Because now that the heroes are teaming up and the villains are teaming up, they do have access to each other's finds and discoveries. For example, I saw a lot of tweets about how - spoilers for anyone who hasn't seen the show yet - when Connor goes into the lava in Episode 4 of this new season, his shirt, pants, and shoes burn off, but his underwear doesn't. That seems like a cheat, except Connor knows Fire from the Justice League who has clothing that doesn't burn off.”

Vietti adds, “We also worked with the art directors and storyboard artists to take a more cinematic approach to the storytelling, avoiding shots that might be too anime, too extreme in the drawings with speed lines in the background and those kinds of things that just don't feel realistic. They're awesome graphically. But again, we're trying to depict a realistic world and tell realistic stories.”

Of course, there are still blueprints and hidden Easter eggs of classic DC animations - the series even opens in Season 1 with a visit to the Hall of Justice, taken from Super Friends. But with the timestamps on the show, their approach to costume and character design, as well as the cinematography, Vietti and Weisman’s goal is to try to have audiences forget that they’re watching a cartoon and, instead, make them feel like they are experiencing something very real. Halting age is also a common characteristic in the superhero genre, and Weisman says he and Vietti have gone against that stereotypical path with each new season of Young Justice, by not only creating a diverse and inclusive group of young heroes that fans have come to adore but using Weisman’s timestamps to the fullest to create even more full characters.

“There’s a need that comics have to make Superman and Batman consistently 30-years-old or 29-years-old, and never really age,” Weisman explains. “That inhibits what you can do story-wise with these characters. But we're not doing that. In our little Earth-16 corner of the DC Multiverse, our character's age and grow in real-time, just like all of us do. And that allows you to really see change. I think that’s the thing our audience relates to and cares about. It is the one sort of inherent advantage that we have over a lot of other shows. We have the freedom thanks to DC and Warner Brothers and this season on HBO Max, to let our characters grow.”