The Fabulously Fun and Filthy ‘Crossing Swords’ Returns for Season 2 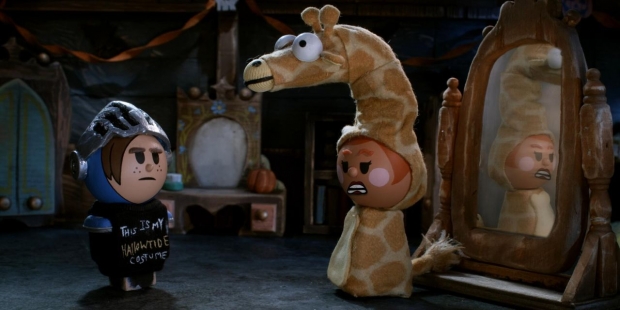 Crossing Swords, the fun and fabulously filthy adult stop-motion animation from Stoopid Buddy Stoodios, has returned for its second season. Premiering Friday, December 10 on Hulu, the medieval comedy’s latest venture includes royal squire Patrick assisting the now broke kingdom in not only returning to its former financial glory, but also fighting off a bonkers former king who’s decided to hijack the thrown from current king Merriman.

“It’s so fun and irreverent and crazy,” says Strong, who plays Patrick's pirate sister Coral. “And to sexualize something as simple as a little peg character is pretty crazy, and the creators take it to the craziest levels. When you think it can't get any crazier, it does. And then it gets even crazier in Season 2. So, we're pretty excited to explore that. And then, you know, we're excited to explore Season 3, 4, 5, 6, 7, 8, 9, and 10.”

Ray, who voices Patrick’s bandit brother Ruben, adds, “I hadn't seen a world like this. You got a filthy, medieval-time show that, at the core of it, is a really smart show, which I think we all dig, and it's more fun to play when you know you're not just doing shock-value stuff, and that there's a purpose to some of the sophomoric shit that can be seen in the show. To have that combo with a style of animation that you just don't get to see a lot, it's mind blowing.” “I love this show and I'm so excited that we've gotten to make it two seasons,” says Green. “We have one of the most spectacularly talented casts and this is such a weird thing. We're really grateful to Hulu for letting us continue to make it. I think it's a perfect thing for this moment when everybody is so stressed out and there's so much reality that is overpowering. Getting to watch something that is so purely silly and transportive is very valuable.”

Green also believes Crossing Swords’ success can be attributed to its use of peg people for the character animation. Using kids’ toys in adult comedy has long been a successful practice, from The LEGO Movie to Robot Chicken’s own use of action figures. And stop-motion, plus kids’ toys, plus smart, but shocking, adult humor appears to be the perfect brew of binge-worthy show ingredients.

He continues, “Stop-motion allows you to photograph with the exact lighting and it feels like [that toy] is actually there. Then twisting something that was originally designed to be childish, or for kids, and then elevating the subject matter, it's just organically funny. It's like seeing a cat make a terrible mistake. Cats are usually so graceful and cool, and then they mess up and slip and that's a viral video. It's the same kind of premise when you see something that's typically used for one thing, then repurposed for something else.” Crossing Swords takes this concept to a new level, with a child’s toy being used not just to deliver clever quips of adult humor, but gore and no-holds-barred nudity.

“And what age would that be?” interjects Ray.

Though Crossing Swords is definitely an 18-years-and-up series, the show’s origins also stem from moments of play with toys. Specifically, Ghostbusters peg people.

“That’s really the genesis of the show, weirdly enough,” says Root. “When we first started [Stoopid Buddy Stoodios], I guess 10 years ago, Harv had a Ghostbusters car full of the four Ghostbusters in peg person form on his desk.”

Harvatine continues, “I just had an idea of ‘What's the simplest form of Ghostbusters I could make?’ So, I took some peg people and I painted them like the Ghostbusters, and the Ecto 1, just with four shapes and basic colors. And I loved it. I loved the look of it. Then, a couple years later, we had a Pinewood Derby type thing. So, every year I kept making more peg people race cars, because I thought they were so cool.”

Root, in turn, thought the characters looked hysterical, and decided the studio - already toy-tastically successful with their adult animations such as Marvel’s M.O.D.O.K, SuperMansion and Robot Chicken - needed to create a peg-person-centered series. As for coming up with ideas for new adventures in Season 2? Root and Harvatine also attribute that to play and a child-level-enthusiasm of imagination. “Once we knew the show would be with peg people, then we were like, ‘Well, let's just start drawing a map of where we would like the peg people to go,’” explains Root. “We really think of every episode like a playset that we're building for the toys to play in. So, it's as if you're a kid, sitting on the floor, playing with your toys, and suddenly you have the circus playset and you wonder what adventure they’re going to go on in the circus place.”

Green adds, “Early on, Tom loved the idea of a giant map. We had all become obsessed with Game of Thrones and the way that that map unfolded introducing all these new territories. So, before we even knew what the show was, he and Harv were drawing that map of all the different lands that would exist that we would eventually get to go to.” Now, Crossing Swords fans will get to visit more of those long-planned-for locations, from Arabian-esque deserts to, as Root mentioned, a wacky circus.

“We went into the season knowing roughly what Patrick's story was going to be,” says Root. “But then we thought, ‘What are the visuals that we want to see?’ For example, we knew we wanted to see Patrick and Broth on sort of a Lawrence of Arabia vista of sand. And we didn't know what that was until we wrote the episode, but that became them going to sort of this Las Vegas destination wedding. They crest this dune and there’s Las Vegas in the distance.

“It was the same thing with the circus episode,” continues Harvatine. “We knew we wanted it to be in a circus because that's a setting that would be fun. Then we just need to figure out how we get there.”

But, of course, it’s not all fun and games. As is the theme of stop-motion shows, creating a work of art, even with toys, takes patience and precision. Ray is one of the cast members that has actually gotten to visit the Stoopid Buddy headquarters and says the sets blew him away.

“I almost was having a panic attack,” he reveals. “I couldn't even fathom spending that much time on anything and to be so precise and articulate with everything. How much is going into making this show gives me a huge appreciation for it and makes me even more grateful to be a part of it.” ‘Natural Habitat Shorts’: Like ‘Ranger Rick,’ But for Adults
Framestore Sets Sail on ‘1899’ with New Virtual Production Tools
Animated Characters: The Art of Babbitt – Part 1
Bruce Smith and Ralph Farquhar Talk ‘The Proud Family: Louder and Prouder’ Season 2
VFX is the ‘Thing’ for Tom Turnbull on Tim Burton’s ‘Wednesday’
We Need to Chat
Choc Chip Animation Riffs on Pop Culture in ‘The Art of Murder’
F is for Flake: The (Not So) Great Animation Robbery?
END_OF_DOCUMENT_TOKEN_TO_BE_REPLACED