Three Acclaimed NFB Animated Shorts to Put on Your Radar 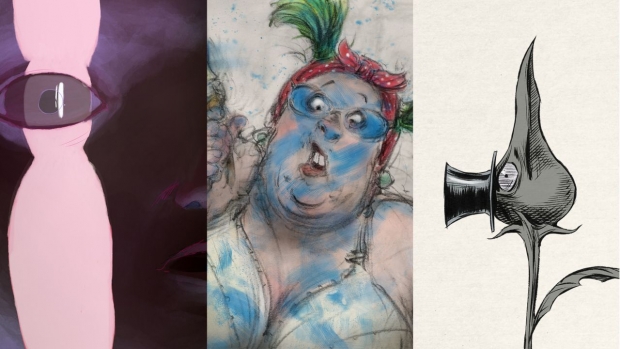 The National Film Board of Canada has a global reputation for producing stellar animation, a reputation only reinforced by their strong showing on this year’s festival circuit. Three films in particular have proven to be stand-outs.

Joanna Quinn and Les Mills’ Affairs of the Art, Claude Cloutier’s Bad Seeds, and Daniel Gray’s HIDE have made a combined total of more than 130 appearances at festivals, garnering more than 42 awards. Each film was supported by a stellar creative crew, including Olivier Calvert, sound designer on Sylvain Bellemare’s team for the Denis Villeneuve film Arrival, which won the 2017 Oscar for Sound Editing.

Despite all three films using a traditional ink-on-paper technique rendered in 2D, they are as different as can be. From a lush fluidity to graphic realism and sparse minimalism, each animator drew on their own background and artistic process to create a unique, highly personal short.

Affairs of the Art

In Joanna Quinn and Les Mills’ Affairs of the Art, audiences are re-introduced to Beryl, now a 59-year-old factory worker obsessed with drawing and determined to become a hyper-futurist artiste.

Audiences first fell for Beryl in Girls Night Out (1987), when the working-class heroine served as a brilliant counterpart to the era’s emphasis on masculinity. Quinn and Mills then produced Body Beautiful (1990) and Dreams and Desires: Family Ties (2006); all three films focused on the beloved Beryl and her determination to assert her individual creativity and challenge male hegemony wherever she finds it.

In this latest adventure, audiences meet her grown son Colin, her sister Beverly, and her husband, Ifor, who serves as her model and muse. An exploration of each of their childhoods reinforces the fact that obsessions like Beryl’s run deep in the family DNA.

The process of drawing Beryl

Quinn’s distinctive hand-drawn animation is the hallmark of her work, which is filled with energy and vitality. She is fascinated by the human body and is forever exploring its eccentricities through constant sketching.

One of Quinn’s favourite drawing tools is the mirror. “It’s all about using reference and not relying on your imagination so that when you really look… you spot things that you sometimes can’t imagine,” she shares. “When I’m doing an expression, I use the mirror to take it to its furthest point. So if it’s happy, what’s the happiest you can possibly look like? And if you’re sad, what’s the saddest you can look like?”

Quinn is just as obsessed with sketching as her heroine, which adds both a meta and autobiographical aspect to the film. “I’m looking for body language and the way people stand or sit or something,” she explains. “When I’m drawing, I become very familiar with the drawings… and somehow, they get imprinted in my brain.” By combining that approach with her loose, broad strokes and strong sense of movement and rhythm, Quinn consistently and singularly captures the endearing aspects of everyday people and places. But while her style has remained true, technique has varied over the years. According to the director, “My first film was done very traditionally: hand-drawn using pencil, paper and cel. There was no such thing as using computers back then. Nowadays, I still animate on paper, but I scan the drawings into a computer and use software to add colour. It’s much quicker.”

Acclaimed filmmaker Claude Cloutier is also driven by the pleasure of drawing, a fact reflected in his latest film, Bad Seeds. This short pulls viewers into a bizarre world populated by carnivorous and fiercely competitive shape-shifting plants, while slyly reminding us that we all still need each other to survive.

Cloutier’s background in graphic novels prepared him well for animation. His style is recognizable by his elegant use of lines and a graphical richness; he employs a meticulousness that’s rarely found in animation—especially in the age of computer animation. “I do these kinds of drawings knowing full well that very few people will be able to truly appreciate my effort,” he says. “But I believe the richness of the drawing can move audiences at a subconscious level.” With an aptitude for detail and precision, Cloutier relies on realism as a signature element in his work. This plays a crucial role in a short like Bad Seeds, where our understanding of the film depends on our ability to recognize historical figures and how they play against each other. One technique that recurs in much of his work is having characters morphing into different shapes, which is often the source of the work’s humour.

“Cartoons are an interpretation of reality, and in that sense, they are related to caricature, which deforms reality for satirical purposes,” he says. “In an animated film, this deformation takes place in time, over a duration—hence metamorphosis.”

With HIDE, award-winning filmmaker Daniel Gray takes us from humour to a heartrending story about family and our current state of disconnection in an increasingly fragmented world. It’s the tale of two brothers playing a seemingly innocent game of hide and seek. But as one brother hides in a small cabinet, determined to win, the years pass, occasionally offering him glimpses into his future as he peeks through the doors.

A co-production between France, Hungary and Canada, HIDE has been presented as an official selection at over 40 festivals, winning 10 awards.

Gray takes a more minimalist approach to animation than Quinn and Cloutier. Using a sparse soundtrack and visuals, shifting from bright and spacious to dark and confined, the film elicits feelings of anxiety and isolation.

Rather than providing his audience with all the information, Gray prefers to approach the process as more of a puzzle, giving just enough to lead the viewer, noting, “You get that enjoyment of solving the film almost, solving the emotion I’m trying to put across.” Gray’s process is to overwrite and overdraw, storyboarding any ideas that come to him so he’ll have material to work with. Afterwards, he pulls the frames that speak to him and builds the film around those.

Similar to Quinn’s obsession with sketching movement, Gray finds himself fascinated with darkness. “I’m a proper lighting nerd when I’m drawing,” he says. “I tend to like combining darkness with a very satisfying image. So you have this Trojan horse thing where there’s something well-crafted and beautiful to look at, and then you have an undercurrent running through it, which is something I enjoy and find effective.”

HIDE is a co-production between La Cellule Productions (France), CUB Animation (Hungary), Official Films (Hungary) and the National Film Board of Canada.

Bad Seeds is a co-production between L’Unité centrale and the National Film Board of Canada.