Trump and the D.C. Gang Return for ‘Our Cartoon President’ Season 3

A new season of the savage, hilarious satire has kicked off on Showtime, exploring the critical question of who could become the next Cartoon President. 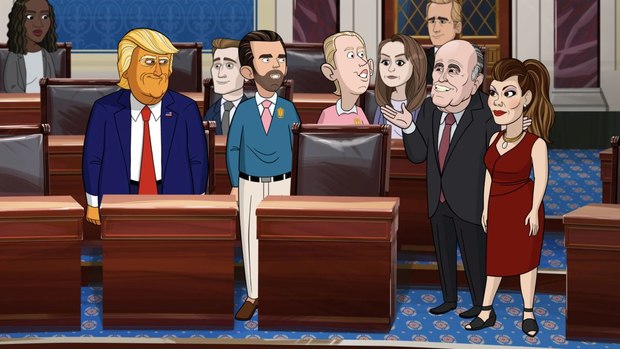 This past Sunday, Showtime’s Our Cartoon President kicked off its third season with an episode, “Impeachment,” that takes a biting, savage look at President Trump’s impeachment proceedings currently taking center stage in Washington, D.C., and shared in minute, often rabid detail by most media outlets around the world.

Executive produced by multiple Emmy winner Stephen Colbert, host of CBS’ The Late Show with Stephen Colbert, showrunner R.J. Fried and Late Show executive producer Chris Licht, the show is a satirical, no-holds-barred look at President Trump, his family and a host of American politicians, pundits and power players.  Season 3 dives headfirst into the 2020 election year, exploring the critical and “yuge” question of who could be the next Cartoon President. Hitting every aspect of the upcoming election, including the race for a democratic nominee, Trump's impeachment trial, and billionaires attempting to buy the election, Fried’s team again this season uses super-fast state-of-the-art animation techniques to keep up with the politics of the week. Our Cartoon President’s production is one of the quickest on TV; the team writes, records, animates, and edits cold opens overnight in a matter of hours.

When Fried originally began producing the series, which debuted in early 2018, he never considered the U.S. political climate would careen so wildly out of control. Season 3 consequently reflects a more biting approach to tackling the ever crazy “news” of the day. “We most certainly did not expect the Trump presidency to be this reckless and disturbing,” he acknowledges. “And to keep up, we’ve had to adjust the show to be far edgier. The news of the day influences the jokes and references, but ultimately, we’re exploring characters, trying to hone in on their motivations and what flaws make them funny. The audience won’t stick with an episode if it’s just joke, joke, joke; you need a compelling, funny story that holds up no matter the news cycle.”

Though the explosively contentious presidential impeachment proceedings dominate today's political headlines, the scope of the show is much more expansive. According to Fried, “This season, the world is so much bigger,” he shares. “We have a big focus on the Democratic candidates and who will be the next Our Cartoon President. Trusted advisers, Supreme Court justices, members of Congress, wealthy donors — we want to hit all the power players that corrupt our institutions. We’ll see Elizabeth Warren take on Mark Zuckerberg, Joe Biden try to secure Obama’s endorsement, and President Trump‘s cabinet manufactures an ‘Oval Office Simulator’ to distract him so he does less harm to the world.” Building on last season’s more cutting-edge comedy, Season 3 continues taking what Fried considers to be stinging but fair shots at key political figures. “Yes, the trend towards more cutting humor definitely continues with Season 3,” he explains. “The animation allows us to get away with a lot. There are a couple brutal jokes about Rudy Giuliani in the first episode — you’ll know them when you hear them. However, we never want to be edgy for edgy’s sake. We make sure the criticism or angle is fair and, if it is, take the comedy as far as we can.”

Taking his cue from Colbert himself, Fried notes that no topic is off limits, and the studio and network support that approach. As long as it’s defendable. “Nothing is taboo. If the target is worth criticism and we can back up our comedy with evidence, the studio and network are very amenable. We follow the Colbert doctrine that we can’t pull our punches just because someone has influence over the series’ future.”

By focusing on President Trump and family, the show is easily criticized for perceived bias against Republicans. When asked if he considers that a large segment of the country’s fervent presidential supporters won’t think too kindly of the show, Fried replies, “This series satirizes power centers across the political spectrum. We never ask, ‘Is this a Republican or a Democrat?’ We ask, ‘How messed up is this?’ That preserves our credibility with the audience, no matter their political beliefs.” “That said,” he continues, “people support this president for a lot of reasons. If you support him, not because of his character, but because he lowers taxes, then jokes about Trump will probably still work for you. If you think Trump is a flawless, Christ-like figure, we can’t help you.”

On the animation side, pipeline improvements have made the show’s production even more efficient, allowing for quick turnarounds of “cold opens” previously unheard of on an animated series of this type. “This season, the production pipeline, after innumerable tweaks, finally feels like a machine,” the showrunner reveals. “Everyone knows what they’re doing, and we have efficient systems for making the show. That didn’t come easy — it’s a one-of-a-kind show that required a one-of-a-kind pipeline. Last season, we turned around a cold open within hours of a Democratic presidential debate, and it got a lot of attention. We will definitely do that more this season considering we’ll be on during so many key events — primaries, caucuses, debates, and so on.”

Rejecting the notion that current events are potentially more comical, in a not really funny way, than what his writing team can invent, and that the relentless nature of today’s political battles leave his audience too fatigued to appreciate the show, Fried states, “I don’t love the idea that reality can somehow defeat comedy, that something is just beyond comedy. For one, what seems insane now might seem commonplace in a few years. We always think THIS is the most insane time, then you look at history and realize politics have always been varying degrees of insane. It’s an understatement to say the Civil War was a pretty nutty time. And, as far as characters, the ones that are the most fun for us are the ones the public worships the most. The voters’ adoration for Pete Buttigieg just makes us want to focus in on him more. We like to remind the audience that anyone attracted to politics as a profession likely has something deeply wrong with them.”