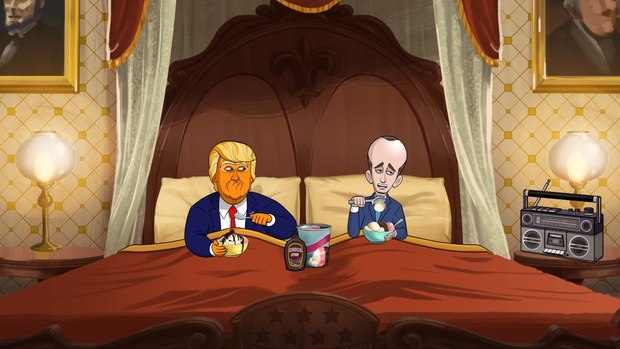 This past May 12 saw the return of Showtime’s Our Cartoon President with a 10-episode Season 2 that continues chronicling the “tru-ish” misadventures of Donald J. Trump, the 45th President of the United States, his family, advisors, political foes and machinations of politics, power and absurdity that currently dominate almost every aspect of life in America. And while the state of American politics, for many, is nothing to laugh at, for many others, the constant weariness, unease and anxiety brought on by witnessing the country’s divisive political theatre can only be tolerated when tempered with a healthy dose of laughter.

Our Cartoon President started as a segment produced by co-creators Luecke and Lappin on The Late Show. Colbert would conduct “live” interviews with Cartoons Trump and Hillary, produced using Adobe Character Animator. According to Fried, “Chris [Licht] realized these characters could be the basis for an entire show and tasked Tim and Matt with building out the world and pitch. Then, along with CBS Studios, they brought it to Showtime and there you have it. I was soon brought on to showrun what was then known as The Untitled Cartoon Trump Project, later rebranded as Our Cartoon President.”

Premiering in February 2018, Season 1 introduced audiences to Trump’s attempts at “winning” the State of the Union address, comforting disaster victims and rolling back President Obama’s accomplishments, as well as his co-dependent relationship with the media. Additional episodes aired last summer, along with a 2018 election special that aired in November. Season 2 features President Trump trying to convince the American people that he's the greatest, least criminal president in history as House Speaker Nancy Pelosi and Senator Chuck Schumer attempt to win back the Democratic base from newcomer Alexandria Ocasio-Cortez. The new season will also follow candidates fighting for the 2020 Democratic nomination – including Beto O'Rourke, Kamala Harris, Bernie Sanders, and Pete Buttigieg – and introduce new characters Kellyanne Conway, Elon Musk, Jeff Bezos, and My Pillow CEO Mike Lindell.

The show is written and produced in New York, at the historic Ed Sullivan Theater where The Late Show is also produced and broadcast. Episodes typically have a 14-week production schedule from script draft to delivery. “It’s fantastic,” Fried shares. “Because our turnaround is so tight, it's really great for the entire writing and production team to be in one space. Depending upon where we are in the production process, the team fluctuates between 10 and 90 people. We divvy the work between lots of teams: writers, producers, directors, recording engineers, storyboard artists, editors, background designers, character designers, character riggers, background designers and animators. They all work in concert.” Unlike shows based purely in fiction, Our Cartoon President is based on real world people and events – the production team must constantly monitor the news and re-assess what the show is “saying” about political issues. “Luckily, Tim and his team have designed an animation process that allows us to pivot very fast,” Fried says.

Pre-production happens quickly, with an obvious eye towards keeping episodes topical based on the state of current political events. “Before the season started, we tried to identify characters and backgrounds we'd need,” Fried explains. “The writers started 17 weeks prior to the season premiere and had around one week to draft each script. So, we'd outline on Monday, script Tuesday through Thursday, table read on Friday morning, and revise until Friday evening. That said, we continue to punch up and polish right up until episode delivery.”

“Once a draft is ready, storyboarding and voiceover records begin and design continues,” Fried adds. “The boards and radio play become the animatic. We'll work really hard on polishing the animatic, getting the timing exactly right, because once we've animated, changes are more difficult.” Politically speaking, the show strives for humor through irony and satire. As an animated comedy, Our Cartoon President benefits from boundaries concerning adult humor long broken by shows like The Simpsons, South Park, Family Guy and Archer, where definitions of “good taste” and “funny” are hotly debated on a regular basis. Gags may hit or miss, but the underlying sarcasm and witty takes on the foibles of humanity are expertly crafted and, more often than not, extremely funny, sometimes even brilliant.

With the backing of Showtime, Our Cartoon President does not tread lightly as it takes on the incredibly contentious and polarizing events surround President Trump, his minions and the U.S. political establishment -- no subject is verboten or taboo. “Everything is fair game,” Fried states. “Comedy speaks truth to power, and if we decide power is so dark and terrible that comedy can't handle it, power has won, right? So, on principle, everything is fair game.” However, Fried shares that targeting the dark underbelly of politics requires careful reflection. “That said, we have to think hard about what we're saying,” he continues. “Is the target correct? Do we have an incisive point of view on the target? Are we being too flippant, or not tough enough? We'll cross so-called 'boundaries' as long as we feel justified in crossing them.”

With a full season under his belt, Fried has eyed some changes for Season 2. “One of the biggest creative changes from last season is that the comedy has become sharper, more cutting,” he notes. “We want the comedy to go toe-to-toe with the increasingly disturbing policies stemming from the administration. So far, we haven't upset anyone whom we didn't want to upset. And Showtime is a great platform for us to go hard with the comedy.” Ultimately, as a comedy, the show is designed to entertain audiences. “The goal is to make our audience laugh, to be a strong satire of Washington, to speak truth to power,” Fried says. “We hope the show is revealing truths about our audience's real-life experiences and frustrations with this White House, Congress, Supreme Court and news media, on both sides of the aisle. Hopefully, Our Cartoon President implicitly helps people cope with and understand what is a very intense and, for many people, painful political climate.”

As a time-consuming and exacting visual medium, episodic animation seems a difficult, though brave way to satirize America’s highly polarized political climate that seems to be morphing daily in more serious, often gut-wrenching ways. But Our Cartoon President manages to take on that challenge quite deftly. “This sort of animation -- topical animation that looks like traditional animation -- is unlike anything out there,” Fried concludes. “In the past, whenever I would mention an animated series to industry executives, the response was always, ‘Yeah, but you can't do anything topical because it's animation.’ Our team and CBS Studios have completely changed that and it's opened up a flood of possibilities for the genre. Our Cartoon President is just the beginning of what we can do here.”

‘Natural Habitat Shorts’: Like ‘Ranger Rick,’ But for Adults
Framestore Sets Sail on ‘1899’ with New Virtual Production Tools
Animated Characters: The Art of Babbitt – Part 1
Bruce Smith and Ralph Farquhar Talk ‘The Proud Family: Louder and Prouder’ Season 2
VFX is the ‘Thing’ for Tom Turnbull on Tim Burton’s ‘Wednesday’
We Need to Chat
Choc Chip Animation Riffs on Pop Culture in ‘The Art of Murder’
F is for Flake: The (Not So) Great Animation Robbery?
END_OF_DOCUMENT_TOKEN_TO_BE_REPLACED