With a Primetime Emmy nomination in hand, the ‘Star Trek’ franchise’s first adult animated comedy launches its sophomore season on Paramount+ with a fresh set of sci-fi adventures often overshadowed by nerve-wracking crew discoveries of their own inner hopes and dreams. 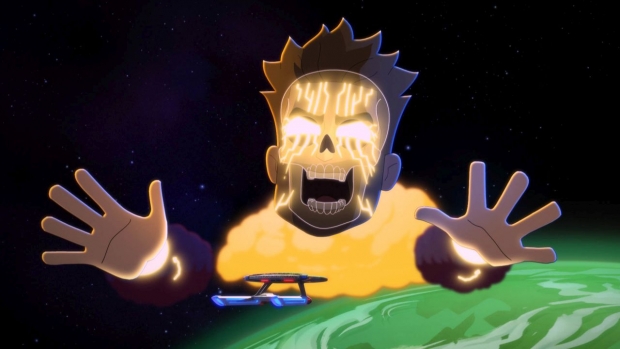 With seven TV series and 13 films spanning more than 50 years, the iconic Star Trek franchise continues to captivate its loyal fanbase with thoughtful and entertaining science-fiction action-adventure storytelling. But in 2020, when the world was in desperate need of a good laugh, Solar Opposites creator Mike McMahan took a new, animated approach to Star Trek, rooted in humor and Starfleet’s unlikely, unseen, and often underwhelming heroes.

Season 2 focuses on the four ensigns keeping up with their duties, chasing promotions and, of course, tackling plenty of sci-fi missions, such as saving members of the ship’s crew from becoming power-hungry gods. But the biggest aspect of Lower Decks isn’t the action-packed, comedy-riddled adventures. It’s the social lives of the crew, how they handle changes in group dynamics - from unexpected absences to new romances and navigating the jungles of mother-daughter relationships - and the discovery of their own inner identities, hopes and dreams. “What's nice about Star Trek - and I didn't create this concept – is that you might have a character that knows a lot about science and a lot about space and a lot about how to be on a ship but might not know a lot about people or themselves,” says McMahan. “It might be as much about their discovery of learning who they are in this world and what they want.”

He adds, “When I moved to LA, I was like, ‘Oh, I'm clearly going to write big action movies.’ And then I was like, ‘Wait! No! I want to write comedies!’ There’s the view of yourself that you have, and there's the view you think other people have of you, and slowly you find out the actual you and you grow from there. And so, our characters are boldly exploring that kind of stuff in this show.”

McMahan and his team worked on Season 2 for a year, beginning production while Season 1 was airing; they’re anxious for the new season’s release. But the team is still keeping cards close to their chest as to what the new episodes have in store for viewers.

“The world loses something when fans aren’t expecting a new Star Trek episode every week, and now, starting this week, for 10 weeks, for over two months, there's going to be a new Lower Decks episode every week,” says McMahan. “And that's a good feeling.” Not only is McMahan a long-time fan of Star Trek, but he also has an affinity for underdogs of science and exploration, evident from his creation of Solar Opposites and his time as a writer, executive producer, and supervising producer on Rick and Morty.

“I think it's from growing up in the 80s, and, from a comedy point of view, you tend to be able to tell stories that haven’t been seen before when they’re coming from a place of not the best of the best,” McMahan explains. “And I think that it's relatable too because I'm not the best of the best. None of my friends are the best of the best, but we still have great stories happening all the time. The Lower Decks crew are still great at their job, they just don't happen to be the most important best people in Starfleet. But these underdogs still get to be as ‘Star Trek’ as Riker, Geordi, and Troi.”

Creating this new world of underdogs has been a dream of McMahan’s since his days of watching Star Trek: The Next Generation (TNG), which later inspired his Twitter account called @TNG_S8, which he used to describe comedic, potential plotlines for an eighth season of the 1980s series.

“I love the comedy and friendship and the world building before the big sci-fi mystery starts to happen, especially in TNG with the more downbeat moments,” says McMahan. “If it were up to me - and I guess now it is - there would be a lot more moments of everybody on the Holodeck or playing chess. Because then a glowing orb would show up on the ship and they’d have to deal with it, and there was always a part of me that was like, ‘No, I just wanted to hang with my friends!’

He continues, “The whole vibe of Lower Decks is expanding and hanging out in this Star Trek world that you always knew or felt like was there but had never been highlighted.” But while the series dives deeper into the world of relationships and comedy, Lower Decks also straddles the line between adult animation and stunning space exploration, with a 2D character art style showing honest shades of humanity and overexpression while also dropping these ridiculously relatable crew members into a gorgeous, nostalgic, 3D eye-candy Star Trek universe.

“I wanted to use the look of a primetime animated adult comedy, so that you knew it wasn't a kid show right off the bat,” explains McMahan. “But the thing that I got excited for was I wanted the world and the sci-fi to look really beautiful and push that 90s TNG-era Star Trek, which is why the Cerritos looks like you could pick it up and plop it into any other TNG-era show. But the people running around it, I wanted them to feel relatable, organic, and personable and have those big, expressive eyes.”

That attention to design is what sets Lower Decks apart from other adult animations and makes Star Trek fans feel that the show still belongs in this much beloved universe.

“When you're making a comedy show with no rules, like Solar Opposites, you do whatever you want,” notes McMahan. “But with Lower Decks, because you need it to feel like Star Trek, and you don't want to break it, and you don't want to mess up the story you're telling or the characters that are in that world, there are different rules.” “The ship design doesn’t get to know it’s in a comedy and the music - which needs to be Star Trek through and through - doesn't get to know it’s in a comedy,” he says. “The vocal performances even go back and forth. Sometimes it gets to be funny. Sometimes it has to be deadly serious, and it's never knowing what you're going to get which keeps you leaning forward and being able to rewatch and enjoy these episodes.”

Season 2’s first episode starts out strong, with plenty of comedy coming from undertones of insecurity and sincerity - again, very relatable – by way of some fun, planet-threatening, life-altering action resulting from a simple cleaning spree gone horribly wrong. But McMahan says he’s especially looking forward to Episode 9. “I think people are going to lose it for Episode 9,” he says. “The whole season is great. But Episode 9 is such a mic drop. I love it.”

With its Season 2 launch, Lower Decks continues to boldly move forward into the unexplored reaches of the Star Trek universe. And adult animated comedy.

“You have to have an amazing team,” he says. “All our voice actors - Tawny, Jack, Eugene and Noël - all of the artists at Titmouse that work on the show, our supervising director Barry J. Kelly, our art director Nollan Obena, it’s everybody just doing amazing work, and really being dedicated to the show that makes us be able to have these gorgeous backgrounds, and have characters that make you laugh. If everybody weren’t bringing their A-game here, stuff would start to wobble. But everybody’s just killing it.”

Choc Chip Animation Riffs on Pop Culture in ‘The Art of Murder’
F is for Flake: The (Not So) Great Animation Robbery?
Re-VIEW: ‘Avatar: The Way of Water’ – A Miraculous Vision
‘Kung Fu Panda: The Dragon Knight’ Celebrates a Special Lunar New Year
END_OF_DOCUMENT_TOKEN_TO_BE_REPLACED