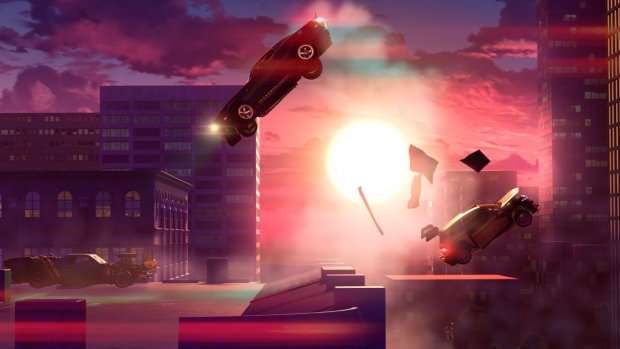 Virtual reality simulations, submarine cars and secret Russian weapons. It’s a high-energy, pedal-to-the-metal fifth season for the Spy Racers team, and the creative minds behind the series are exploring new realms of animation, special effects and story that they’ve previously had to hold back on.

DreamWorks Animation’s Annie Awards-nominated Fast & Furious: Spy Racers, inspired by the hugely successful blockbuster Universal franchise, has followed teenage street racer and government spy Tony Toretto (Tyler Posey) and his crew as they go undercover in Brazil, make a dangerous journey to the Sahara Desert on a rescue mission and flee to Mexico to clear their names of crimes they did not commit.

In Season 5, which premieres today, August 13, the Spy Racers race against time to rescue Tony, who has been kidnapped and is being tested and used for his mind. When the rescue team arrives, they discover their friend has inexplicably lost the ability to do what he loves most - drive. The Spy Racers band together on their new mission traversing land, air, and sea in the South Pacific to foil the dreaded arms dealer Sudarikov (Fred Tatasciore) and his dangerous plans. But Sudarikov’s secret weapon may prove too powerful for the Spy Racers and ultimately succeed in endangering the world.

We got the chance to talk with Tim Hedrick - series co-creator with Bret Haaland - about the wild rides in store for viewers this season, and what it was like creating underwater cars inspired by James Bond films, designing a virtual reality within an animated series, and having a friendly, potentially one-sided competition with the live-action Fast & Furious films. Victoria Davis: When we talked for Season 2, you said there’s still “a lot of room in the world to explore,” especially regarding CG animation. How did you and the team explore new ground with Season 5?

Tim Hedrick: Well, this was an interesting season to kind of dig into some new views on technology. One thing we did early in the season is have them playing the video game with a ton of augmented reality viewpoints on the screens, which was really an interesting challenge for us. And then developing the look of the AI cars later, and their POV on the world, that became a really interesting thing as well.

And then with all the underwater stuff, I was happy with how that all turned out. I was excited to go underwater this season because so much of the show, for me, is influenced by those Roger Moore-era James Bond films. One of the great cars from that era is the Lotus Esprit that Bond drives and turns into a sub. I always want us to do that, so I was excited that we got to do that this season.

VD: A big challenge you’ve mentioned in previous interviews has been getting car looks and movements right. Was that especially difficult this season with so many underwater scenes featuring submarine cars and virtual reality racing?

TH: Yeah. It’s like a whole different realm of physics that you must think about, with aqua dynamics, how the cars move against the water and how they move through the water. Chris Browne and those guys worked really hard on the effects to make sure everything looked just right. We spent a lot of time watching submarine movies, which is not a bad part of any job. VD: Jumping back to the AI sequences, what’s it like creating a virtual reality within an already animated, high-shot count world?

TH: I know, it’s like, “How do we make this even crazier?” Obviously, video games are influencing all aspects of entertainment now, especially for us in the CG world, with all the racing games we took inspiration from, but also wanted to step back from. So, building out the inner Toretto video game mind sequences really allows us to push everything even further. We change the color palette and how the physics of that world work, where you see the car fly through the air, or bust through the side of the world off the edge. We just go crazy with all the stuff that we would normally try to pull back on during regular parts of the show.

VD: For fans that have followed this series and are tuning into the new season, what are some lesser-known fun facts about the production that would interest them, that stood apart from past seasons?

TH: There are a few things. One is that we integrated Palindrome into the team this season. Bringing Paul White on from Big Show, it was so exciting to see him grow as a voice actor, because it's new for him and we just throw him these Russian lines. We brought in a coach to work with him in the booth and it turned out great. And to see his relationship with Miss Nowhere, that's a really fun part of the season.

Then the entire build of this underwater lair was a big production challenge for the team that Christine Bian and her guys totally pulled off. They built this gigantic, underwater parking garage / submarine slash aircraft carrier that's going to float towards Bangkok. VD: You’ve mentioned before that Spy Racers, right from the get-go, was meant to “blur that line between animation and feature quality.” As you and the team continue to raise the bar with each season, is it difficult trying to get more and more epic with each season?

TH: Yeah, it is, because we want to move the series throughout the world. We start by saying, “Where we haven't been yet?” and then put those on the map and say, “Okay, now let's talk about what the character story is that's going to drive us there.” With this season, we thought we were at a point where the kids have been globetrotting so much that we hadn't really explored enough of the spy plane. We always thought it would be cool to have a spy-plane-on-spy-plane dogfight, which we get to do this season. But we do have more ideas. There's lots of the world left to discover.

VD: While you and your crew have been working on the show, more F&F live-action films have released. What’s it like working on your show simultaneously while these hugely successful films continue to be produced? Does it add any extra pressure? Or just lend more ideas?

TH: It's more of like a friendly competition. I mean, they're probably not competing with me, but I was extremely excited to see F9 come out and immediately went to, “How can we up the ante? How can we compete?” Because they just get bigger and bigger.

But one thing that’s really paying off for us is that, right from the start, I wanted to set up a world and characters that could stand on their own. Where you wouldn't have to know anything about Fast & Furious to watch our show. If you do know the franchise, great, we have some Easter eggs for you. But if not, you can just journey into this world. That has helped us keep on our own pace and not be too concerned about synching up with the rest of the franchise. VD: Your team is always looking at ways to up the ante. And with this season, you have virtual reality races, underwater races and other action that push past previous creative limits. Are there specific action sequences from this season that you're particularly proud of?

TH: We really wanted to get into self-driving car technology. That's something we’ve wanted to do for a long time. I was reading this article in The Washington Post not that long ago that talked about actual AI drones currently fighting in warfare. No one is commanding them. They’re just put out there and they fight. So, when Tony is racing against the cars made from an AI that’s been created from his brain, I don't want to say it's totally plausible, but it's close.

VD: What are you hoping fans get out of the season that maybe they haven’t before?

TH: It’s been fun to see this team develop, and I want viewers to feel like our crew is growing and progressing and that they have been part of the ride with these guys and want to go on another adventure with them. And, hopefully, the fans will demand that.

‘My Dad the Bounty Hunter’: Representation Beneath the Skin
The Massive Creative Fellowship Behind ‘The Lord of the Rings: The Rings of Power’
‘The Dragon Prince’ Director Villads Spangsberg Talks Toonlines and Tough Challenges
Laurence Fishburne and Steve Loter Talk ‘Marvel’s Moon Girl and Devil Dinosaur’
Taking an Old-School VFX Approach in ‘All Quiet on the Western Front’
‘Natural Habitat Shorts’: Like ‘Ranger Rick,’ But for Adults
Framestore Sets Sail on ‘1899’ with New Virtual Production Tools
VFX is the ‘Thing’ for Tom Turnbull on Tim Burton’s ‘Wednesday’
END_OF_DOCUMENT_TOKEN_TO_BE_REPLACED