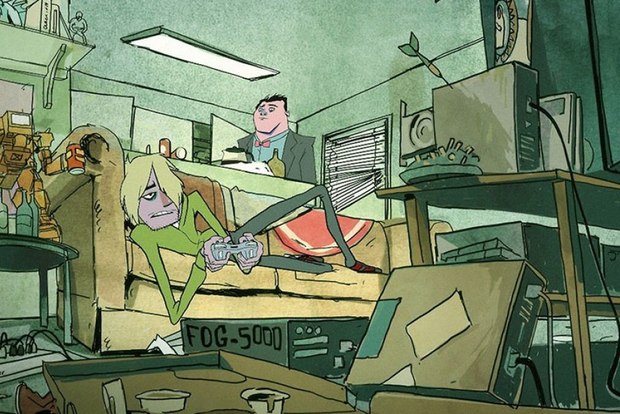 In celebration of the film’s one night in theaters on Tuesday, December 6, AWN is giving away four sets of tickets in five different cities across the U.S. to see Nerdland, the first full-length animated feature from Titmouse!

A wild tale of two slacker best friends, the 2D-animated Nerdland features aspiring actor John (voiced by Paul Rudd) and wannabe screenwriter Elliot (Patton Oswalt), both of whom have seen their dreams of super-stardom fizzle. With their 30th birthdays looming and desperation growing, they decide that in this 24/7, celebrity-obsessed world of over-shared navel-gazing, there are more ways to get famous than ever before -- so why not become famous by the end of the day, at any cost? With only the grudging support of a wacky collectible store owner (Hannibal Buress) and their one-sided love for a pair of equally fame-hungry women (Riki Lindhome & Kate Micucci) to keep them going, John and Elliot troll Los Angeles on an attention grabbing journey of increasingly reckless publicity stunts and failed heroics. While navigating their hyper-stimulating landscape of consumerism gone wild, the disheartened duo inadvertently become key witnesses in a high profile crime that sets the news cycle on fire. The resulting attention (from both the public and their dream girls) may just be John and Elliot’s ticket to fame, making them household names... but only if they can survive the infamy and worldwide shame.

Following its world premiere at the 2016 Tribeca Film Festival, Nerdland went on to screen at Annecy in June, then the Ottawa International Animation Festival in September, and the Beyond Fest in October. The raunchy satire debuts in movie theaters nationwide for one night only via Fathom Events on Tuesday, December 6 at 8:00 p.m. local time.

Tickets can be purchased online at www.FathomEvents.com or at participating theater box offices, but you probably want to know how to get them for free, right? OK, here’s the skinny:

Courtesy of Samuel Goldwyn Films and Fathom Events, four sets of tickets are available in five different cities: New York, Los Angeles, Chicago, Seattle and Denver. Yes folks, that’s 20 sets of tickets! For free!! If you know you’ll be in one of these cities on December 6, send an email to info@awn.com with your full name and the city you’ll be in. The subject of your email must include the words ‘Nerdland’ Giveaway and the name of your city! Like this:

Winners will be selected at random, and will be notified via email. The deadline for entries is 5:00PM Pacific on Wednesday, November 30, 2016.