First feature-length film from the animation studio behind ‘Metalocalypse,’ ‘Moonbeam City’ and ‘Superjail!’ is written by Andrew Kevin Walker and directed by Chris Prynoski with animation by Mike Roush under the production design of art director Antonio Canobbio. 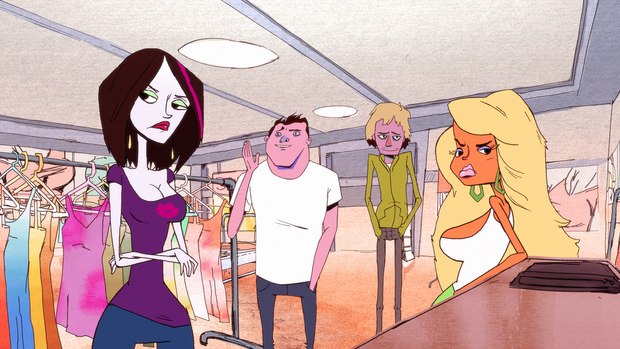 Aimed at adult audiences, Nerdland started out as a script by Andrew Kevin Walker, the screenwriter known for writing the David Fincher classic Seven. Following a lengthy development process, which included everything from live-action to a web series, the project finally landed as an animated feature at Titmouse, the studio behind Metalocalypse, Moonbeam City and Superjail!.

With animation by Mike Roush under the production design of art director Antonio Canobbio, Nerdland is produced by Gavin Polone and executive produced by Prynoski alongside Shannon Barrett Prynoski and Kat Landsberg. The movie follows two friends, aspiring screenwriter Elliot and aspiring actor John, whose dreams of stardom seem unattainable. The two LA dudes start to panic when they realize they’re about to turn 30, so they decide to risk everything in order to become famous in a world where narcissism reigns supreme.

If you haven’t already seen it, check out the (red-band, NSFW) trailer in the player below:

Nerdland has already been screened at the Tribeca Film Festival, but this will mark its European premiere.

Aspiring actor John (Paul Rudd) and would-be screenwriter Elliot (Patton Oswalt) are two LA dudes approaching their 30th birthdays without yet becoming the megawatt superstars they know they were meant to be. In a town built on who you know (and who knows you), the ambitious duo will set out on an all-day journey through their all-star rolodexes to make it big by the end of the night.

The first feature from animation house Titmouse, Inc. whose brainchildren include ‘Metalocalypse,’ ‘Moonbeam City’ and ‘Superjail!,’ Nerdland is a hallucinatory Hollywood road trip told in an appropriately bold and distinctive animation style. Featuring an army of comedy cameos including Hannibal Burress, Larraine Newman, Mike Judge, Kate Micucci & Riki Lindhome, Venture Brothers’ Jackson Publick, Molly Shannon, Charlene Yi, and Paul Scheer, this is an R-rated cartoon comedy about celebrity, excess, and two showbiz nobodies with a plan to become famous -- or even infamous -- no matter what…