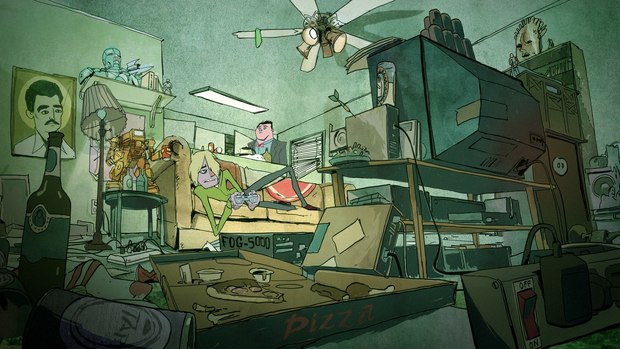 One of the entries on the 2016 Tribeca Film Festival slate is Nerdland, the adult animated feature that opens the festival’s Viewpoints competition.

With a Hollywood backdrop, the story centers on two bests friends, an aspiring screenwriter (voiced by Oswalt) and an aspiring actor (Rudd), who make a last-ditch effort to achieve fame before they hit their 30th birthdays.

Here’s the red-band trailer -- courtesy of Variety -- which features plenty of profanity, strip club action and other adult situations for a couple of losers ready to skyrocket to fame:

Aspiring actor John (Paul Rudd) and would-be screenwriter Elliot (Patton Oswalt) are two LA dudes approaching their 30th birthdays without yet becoming the megawatt superstars they know they were meant to be. In a town built on who you know (and who knows you), the ambitious duo will set out on an all-day journey through their all-star rolodexes to make it big by the end of the night.

Sony’s Sausage Party, starring Seth Rogan, made a big splash at SXSW with a work-in-progress screening earlier this year and is set to arrive in theaters on August 12, 2016. The 2016 Tribeca fest runs April 13-25, with the world premiere screening of Nerdland set for April 14.