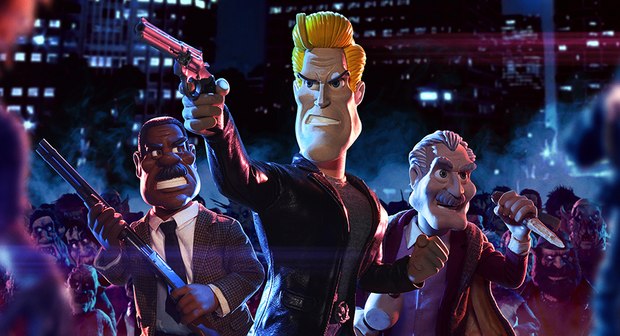 UTA Independent Film Group has picked up North American sales rights to Animortal Studios’ ‘Chuck Steel: Night of the Trampires,’ which had its world premiere at Annecy 2018.

Directed by Animortal co-founder and BAFTA award-winning director, writer and producer, Mike Mort (Aunt Tiger, Gogs), Chuck Steel: Night of the Trampires was developed and produced entirely at Animortal Studio, a 23,000-square-foot stop-motion animation production and VFX facility in Bridgend, South Wales. With a number of new projects in development across both film and TV, the company will look to collaborate with other filmmakers across a variety of genres on its upcoming slate.

The voice cast includes great British talent such as BAFTA-winner Jennifer Saunders (Absolutely Fabulous, Sing, Coraline) and BAFTA-winner Paul Whitehouse (Ruddy Hell! It’s Harry and Paul, The Death of Stalin, Alice In Wonderland). Chuck Steel: Night of the Trampires was produced using a crew of 150 people, with 27 separate units either shooting or prepping simultaneously in the studio.

Set in 1986, the film pays homage to the look and feel of 1980s live-action movies. Four hundred twenty-five puppets were created to represent hundreds of different characters and creatures, and dozens of giant scale-model sets were constructed to illustrate the various locations where the film takes place. Filmed using digital stills cameras, its stop-motion content was shot at 24 frames per second instead of the usual 12, helping to create more fluid movement than is typically seen in most stop-motion productions today.

The film follows Chuck Steel, “the best God damn cop on the force” according to his boss, Captain Jack Schitt. The cop-on-the-edge who doesn’t play by the rules has his work cut out for him when the governor of Los Angeles reduces the licensing hours for clubs and bars, triggering a sudden, inexplicable spate of high profile assaults in the city.