Experimental storytelling is pushed to the limits with four new VR experiences, including a new short film directed by John Kahrs. 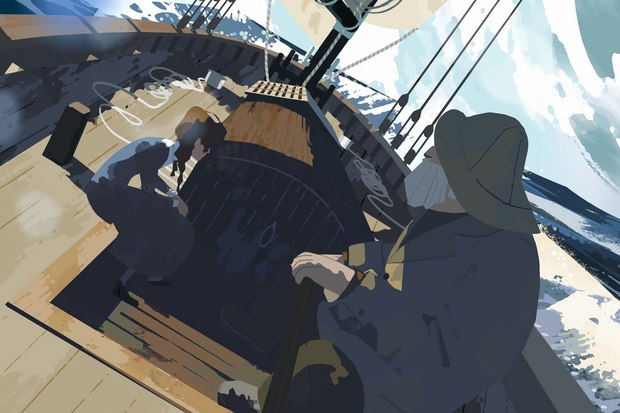 From Google Spotlight Stories, ‘Age of Sail’ is directed by John Kahrs and produced at Chromosphere.

Google Spotlight Stories is bringing four new virtual reality projects to Annecy this year: PIGGY, Age of Sail, and Back to the Moon, as well as a behind-the-scenes look at the VR experience created for director Wes Anderson’s new stop-motion animated feature, Isle of Dogs.

A division of Google’s Advanced Technology and Projects (ATAP) group, Google Spotlight Stories has won a slew of accolades for its experimental shorts, which have paired top animation talents with pioneering technology in order to push the boundaries of immersive, interactive storytelling.

Partnering with VR@Annecy for the third year running, Google Spotlight Stories will be presenting a Studio Focus Session on Wednesday, June 13 at 6:00 p.m. Entitled “Animation Everywhere,” the session will be moderated by GSS executive producer Karen Dufilho and creative director Jan Pinkava with GSS directors Fx Goby, Helene Leroux and John Kahrs joining in on the discussion.

Here’s Looking at You, Pig PIGGY, directed by Pinkava and Mark Oftedal (Buggy Night), is essentially a set-up for an experiment in interactivity. “It’s an allegory of desire,” Pinkava says. “Piggy is everyone who wants something that they’re not allowed to have. He wants this cake, but he’s too embarrassed to eat it while we’re watching. As long we’re watching him, or watching the cake, he can’t have the cake. It’s as simple as that.”

How can Piggy avoid the viewer’s gaze? “Normally, you’d do such a thing as a classic Warner Bros. series of gags in an animated short, and we wanted that kind of feeling,” Pinkava explains. “But now it’s interactive and the timing is up to the audience to some extent. The question is, can you do something funny and comedic when you’re giving up a lot of the timing of the gags to the audience?”

The genesis of the project, according to Pinkava, was wanting to explore technical developments in the platform. “What is it that we want to be better at? How can we push our tools to do more?” he asks. GSS developed a number of things for PIGGY, including, for the first time, device-independent viewing. Previously, each project had to be tested extensively across multiple devices and optimized for each one, resulting in the production of multiple versions of the same film. “One of the big improvements we made, under the hood, was to make the technology more general, so it doesn’t matter what you use—a VR headset, small screens, big screens, whatever—our software just works. Regardless of what kind of device you’re watching it on.” But the biggest development with PIGGY is the level of interaction between the character and the viewer. The viewer watches Piggy, and, in a new twist for VR, Piggy watches the viewer right back. This interactivity is achieved with the use of a trigger system that can be applied to objects, locations, and even entire scenes, along with improved eye-tracking technology. “Piggy’s eyes really follow you in that 3D space,” Pinkava notes. “If you’re wearing a VR headset and wandering around the room, his gaze follows you. You have the feeling that he’s really watching you. You’re watching him, he’s watching you, and between you is the cake that he’s trying to get.”

While PIGGY might appear to be one of the more simplistic shorts to come out of Google Spotlight Stories, its apparently straightforward minimalism belies the amount of research and development the project entailed. “It’s probably the one that took us the longest, that’s been the most painful, that’s been the hardest to produce,” Dufilho comments. “The character interactivity has to be so precise and so good. And that’s really the trickiest part. Making something really hilariously interactive is an art in and of itself.”

Meanwhile, Age of Sail, directed by John Kahrs and produced at Chromosphere, is one of the longest and most visually complex VR projects GSS has undertaken to date. “Kevin Dart’s shop, Chromosphere, is brimming with talent,” Pikava asserts. “They’re a rare place where they’re extremely collaborative. People come there to do good work that they really care about. I can’t think of a better place you’d want to go if you want your show to look beautiful.”

With production design by Celine Desrumaux, Age of Sail employs an illustrative style reminiscent of Patrick Osborne’s Academy Award-nominated Pearl (2016), yet also delivers a sweeping, cinematic experience, and—in a first for Google Spotlight Stories—dialogue. “Dialogue is a new thing for us,” says Dufilho. “We’re using actual voices and real performances, so that makes it tricky, and a little risky.” A tribute to a time before the Wright Brothers conquered the skies, Age of Sail takes place entirely on the open sea, which according to Dufilho, involved a lot of calculation. “The specifics of it feel real. It’s math, but it’s lovingly done math,” she says. “And it’s just phenomenal. Water has been done a lot; it’s not a new thing. But water in real-time is new. It takes a lot of math to make it work and keep it looking beautiful.”

To the Moon and Back

Described by Pinkava as “one of the most richly realized and complex Google Doodles ever made,” Back to the Moon is an homage to Georges Méliès, the father of visual effects. “It’s a fully interactive animation production that is a Google Doodle,” he says. Full of many of the iconic, classic stage effects and gags that Méliès pioneered, the new Google Spotlight Stories short is produced by Nexus, the studio behind last year’s Rain or Shine, and directed by Fx Goby and Helene Leroux.

“FX and Helene even went to the Cinémathèque Museum in Paris to talk to the world experts on Georges Méliès and show them the work, and got their blessings,” Pinkava recounts. “We’re exploring new techniques, just as Méliès was doing in his time. It’s kind of fitting that we’re using this very new and innovative technology to celebrate someone who was pioneering new technologies and techniques in his own time.”