Four new animated IDs directed by Daniel Boyle and Alex Robinson are a mix of CG and hand-drawn 2D techniques. 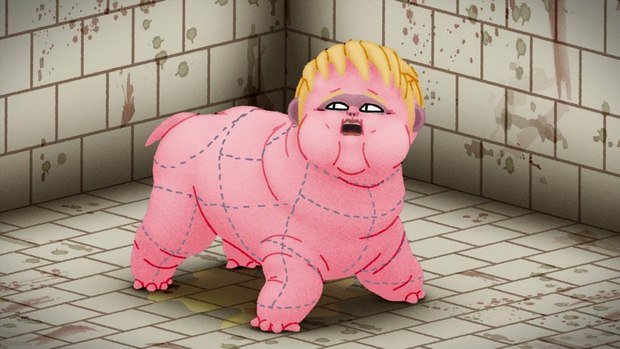 Loosely linked by the theme of transformation, each one of the four 15-second IDs started life as rough character sketch, which Boyle and Robinson then built small stories around. Influences included Akira, Grant Morrison's The Invisibles, and the evil grandma from Bill and Ted's Bogus Journey.

“Adult Swim approached us with a very open brief,” the duo says. “Drawing on a couple of ‘-isms’ that we had bouncing around our heads at the time (narcissism, shamanism, cannibalism and knitting...ism) we set about making some feel good ‘toons!”

The characters for the IDs were built, rigged, and animated in CGI, with the addition of hand-drawn line work and other animation.

“We used flat projections of the characters to remove perspective, which created a more traditional 2D appearance,” Robinson details. “Almost all of the backgrounds were hand-drawn too, with the aim of creating an overall 2D aesthetic.”

Check out the animation breakdown in the player below: