Fans of Gabe Liedman’s animated superspy series about a ‘queer’ team of loveably annoying misfit LGBTQ+ geniuses will have to rewatch Season 1 to satisfy their craving for more of the show’s hilarious antics and chemistry. 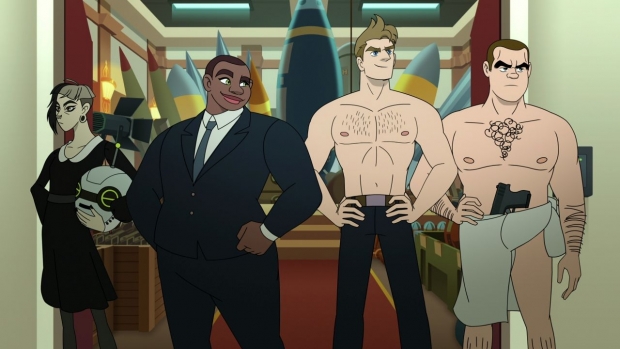 Netflix’s Q-Force, the colorful, raucous adult animated comedy launched last year, has been canceled, as reported by Variety. The show, which hit the streamer in September 2021, follows a group of queer spies hoping to run ops from their West Hollywood operations base; the ensemble cast includes Sean Hayes; Gary Cole; David Harbour; Patti Harrison; Laurie Metcalf; Matt Rogers; Wanda Sykes; and creator Gabe Liedman. The series made a splash at launch, receiving mixed reviews, while some in the queer community saw it as promising.

In NPR’s review by Glen Weldon (host of the NPR’s Pop Culture Happy Hour podcast), he noted, “It's perhaps unfair that I, a queer man, went into the first episode of Q-Force expecting a caustic, withering tone and sharp, jugular-targeting humor. I anticipated the joke-density of Archer combined with the combative fierceness of RuPaul's Drag Race: Untucked. And finally, given the show's premise — a hugely promising young man outs himself at his graduation from spy-school, causing his homophobic boss to relegate him to a low-stakes agency outpost in West Hollywood — a bit of good, old-fashioned queer outrage.”

He continued, “As I say: unfair assumptions, all. Reductive. Also, as it happens, completely wrong. From its opening moments, Q-Force's jokes are surprisingly gentle and humane, and they come at a steady, even measured, pace. The absence of an unceasing gag fusillade gives each episode more time for the kind of emotional beats that seek to establish and build on the ensemble's interpersonal relationships.”

The show followed Steve Maryweather, AKA Agent Mary, once the Golden Boy of the American Intelligence Agency (AIA) until he came out as gay. Unable to fire him, the Agency sent him off to West Hollywood to disappear into obscurity. Instead, he assembled a misfit squad of LGBTQ+ geniuses: expert mechanic Deb, master of drag and disguise Twink, and hacker Stat, together known as Q-Force. Last September, in an interview with AWN’s editor-in-chief Dan Sarto, Liebman reflected on how the show may eventually land with audiences, revealing, “I hope people laugh. I hope they enjoy themselves. I hope they feel they've been on an adventure. I hope they walk away with all the feelings that I love having when I watch a James Bond or Jason Bourne movie. I want them to have that thrill. But it was really important to me, from the very early stages, the building blocks of the show’s DNA, to base the politics and representation in a queer sensibility.”

According to Liedman, Netflix gave the creative team 10 episodes to make a show that didn’t have to fight for the queer space. Instead, they lobbed jokes directly to that audience, the people that, as he added, “are going to get it.”

While the creative team had hoped for another season, its 10 episodes delivered on Liedman’s convictions and his agreement with the streamer, “The first sentence I ever said to Netflix about this show was it was a queer show. That is always going to be true. It has a queer cast, queer writer, queer artists… because there hasn't been gay James Bond before. So, let’s try it. This has been baked in from the beginning. And Netflix said yes. And I hope audiences say yes too!”