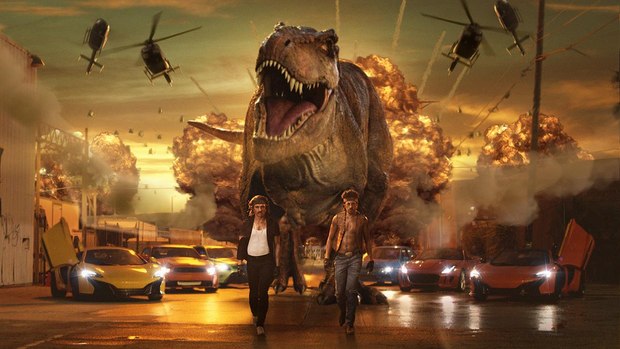 “Doing a longer format spot is always fun because you get caught up in the momentum of the story and have some latitude to really push and try the unexpected,” said MPC VFX supervisor Benji Davidson. “Of course it helps to be collaborating with Heat and a director like Wayne who set the creative bar so high and trust our process. We created a pipeline for Madden: The Movie across our studios in Los Angeles, New York, London and Bangalore. We employed all disciplines and routed the work through Telecine to keep color consistent. We spent two weeks completing 200 shots, and although we were a little sleep deprived, we did everything with a laugh and love where we landed.”

“Wayne gave us permission to turn the crazy up to eleven on this one, which is rare in a commercial,” said MPC VFX supervisor Zach Tucker. “Madden: The Movie is filled with a myriad of effects, from Rob Gronkowski’s football launcher to Coach Rex Ryan crushing an Audi. The last shot, for example, is effectively a living movie poster. Our two heroes walking slow motion towards camera with controlled chaos behind them. A roaring pet T-Rex? Check. Squadron of football-firing helicopters? Check. One huge explosion? No way, make it four.”