LOOK: GKIDS Unveils Storyboards and Concept Art from ‘My Entire High School Sinking Into the Sea’ 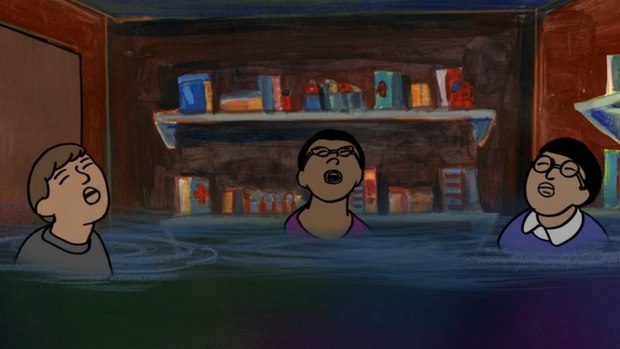 Courtesy of GKIDS, here’s a look at some of the storyboards and concept art created for the indie animated comedy disaster film, My Entire High School Sinking Into the Sea.

Equal parts disaster cinema, high school comedy and blockbuster satire, the film is told through a dream-like mixed media animation style that incorporates drawings, paintings and collage. It follows Dash (voiced by Jason Schwartzman) and his best friend Assaf (Reggie Watts) as they prepare for another year at Tides High School muckraking on behalf of their widely-distributed but little-read school newspaper, edited by their friend Verti (Maya Rudolph). The voice cast is rounded out by Lena Dunham as a popular know-it-all, and Susan Sarandon as the lunch lady who is much more than meets the eye.

Check out a the storyboards and concept art posted below, and be sure to click on the images to see them full-size: