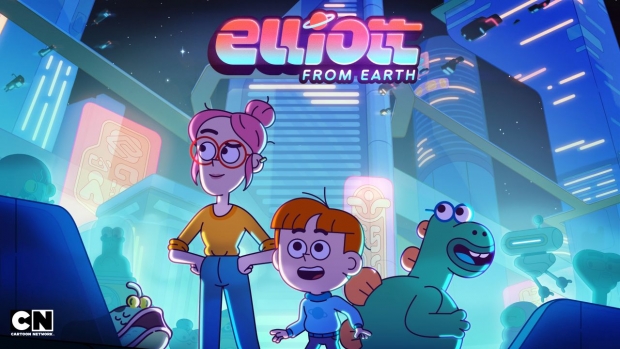 Cartoon Network’s original 2D animated comedy sci-fi adventure, Elliott From Earth, introduces us to Elliott, his mom Frankie, and his new best friend – dinosaur Mo, as they find themselves in space and begin an unexpected journey across the universe to discover why they were brought there in the first place.

As they learn to call it home, Elliott and Mo explore the Centrium – an exciting place high up among the stars full of amazing aliens and wonderful cosmic creatures who, although different species, coexist in harmony.

Elliott From Earth showcases the power of friendship and embraces the wonders of being different, open minded, and accepting.

The show made its UK debut March 6 and will roll out in select APAC, LATAM, and EMEA territories beginning this April. The series premieres Monday, March 29 (9:00 a.m. PT/ET) with a two-week special event on Cartoon Network.

Directed by Mic Graves and Tony Hull with voices from Samuel Faraci (Paw Patrol), Noah Bentley (Dragons: Rescue Riders) and Naomi McDonald (Angelina Ballerina: Dance Around the World), the series is produced out of Cartoon Network’s EMEA hub, and is the latest from the team behind The Amazing World of Gumball. The first episode, “Wednesday – Part 1,” can be viewed on the CN App and VOD starting Monday, March 22. The full line-up for the two-week premiere event beginning March 29 on Cartoon Network is: