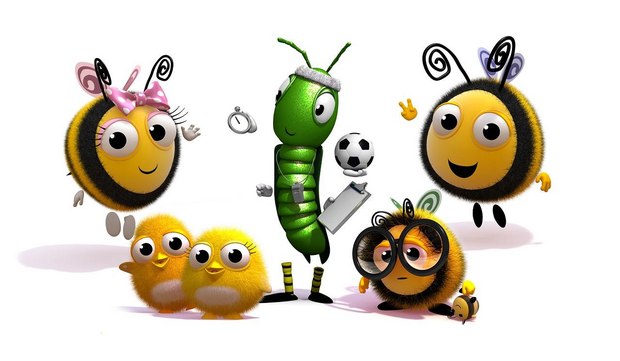 The series is produced by London-based production company Lupus Films, Monumental Productions and DQ Entertainment.  Bejuba! Entertainment, is handling TV and home entertainment sales and will be at MIP Junior, while Space Enterprises represents the global licensing and merchandising for the series.

The new series is currently in production and has just launched on Disney Junior in the U.K. and will roll out in other territories in 2016. It features three specially-written autumn, winter and summer themed half-hour episodes written by BAFTA award-winning head writer Bridget Hurst.

Set in the delightful community of Honey Farm, The Hive follows the adventures of a host of adorable characters including inquisitive Buzzbee, bossy Rubee, giggly Babee, loyal Barnabee, busy Postman Spider, stoic Worm and the birds Fluff and Feathers.

In this second series, the world of Honey Farm will be extended to introduce some new locations including the Buzz Stop, a great place to hang out with friends, a mobile muffin van, from which Mamma Bee sells her cakes, and a new community center, where the gang gathers to try out new activities.

“We are bee-yond excited that Buzzbee and his friends will be buzzing back for a new series of adventures on Honey Farm,” says Ruth Fielding, producer for Lupus Films. “The series has flown to success all around the world and we’re delighted to be able to satisfy demand for the show with so many exciting and refreshing new episodes”.

“The international demand for this very popular and loved show highlighted to us that we had to make more episodes.  We’re delighted to be bringing new episodes to MIP JR.” said Bejuba! Enertainment president Tatiana Kober.

Produced by Lupus Films, Monumental Productions and DQ Entertainment, the first series of The Hive was broadcast in 2010 on Disney Junior and CiTV in the UK.  By summer 2012, the series had been sold to 150 territories across the globe including the U.S., Canada, Poland, Spain, South Africa and Australia.