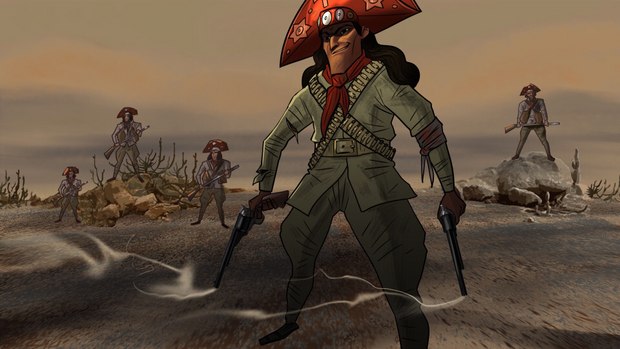 In addition to a slew of family-oriented projects, Ennio Torresan is currently seeking funding for animated feature ‘The Wrath of God,’ which he wrote and plans to direct.

The Brazilian national football team is invariably one of the best in the world, yet the majority of its most gifted players play their club football overseas, where the opportunities are more numerous, the quality of football is higher and the pay is better. It’s a similar story in animation. Over the past decade Brazil’s animation industry has produced award-winning films, seen a dramatic increase in production volume, and will be recognized by the world’s leading animation showcase, as Annecy’s country of honor in 2018. Still, many of its artists, like its football stars, feel compelled to pursue their careers abroad.

Naturally, Hollywood is a major draw, and over the years many Brazilian artists have gone on to establish themselves in key roles at the biggest studios. Perhaps the most prominent among them is Blue Sky’s Carlos Saldanha, director of multiple Ice Age and Rio films, and the recently Oscar-nominated Ferdinand. Some have been in LA since the late-1990s, like Renato dos Anjos, who was recently Head of Animation on Disney’s Zootopia and Wreck-It Ralph 2, and Fabio Lignini, who supervised animation on How to Train Your Dragon 1 and 2. Then there are rising stars like Leo Matsuda, a story artist on Big Hero 6 and Frozen 2 and director of Oscar-shortlisted short Inner Workings, and 3D virtuosos like Victor Hugo and Pedro Conti.

Ennio Torresan is a senior statesman among the Brazilian contingent. He is currently Head of Story at DreamWorks Animation where, since 2002, his credits include the Madagascar and Kung Fu Panda franchises, Megamind, Boss Baby and the upcoming Abominable (formerly known as Everest). Back in 1986, as a fresh graduate, Torresan knew the only realistic professional path lay outside of Brazil. In 1993, pencil tests for his hand-drawn short El Macho earned him work in London painting backgrounds at Steven Spielberg’s Amblimation. Turner Feature Animation called two years later, and Torresan moved to Hollywood as a layout artist on musical comedy Cat’s Don’t Dance. Annecy selected El Macho in 1995, prompting HBO to invite him to produce two pilots for a TV show based on the concept. Though the project stalled, the films caught the attention of Stephen Hillenburg who hired Torresan as a story artist for the first season of SpongeBob SquarePants. Today, 25 years since leaving Brazil, eager to return to his roots and encouraged by the burgeoning domestic industry, Torresan is actively pursuing projects with a Brazilian flavor. In 2013 he co-directed 2D feature Until Sbornia Do Us Apart, based on musical Tangos & Tragédias, and is currently developing a slate of movies, including adult-skewing The Wrath of God and Proto-Man, and family oriented Copacabana 1920 and Fofa 3000. Ahead of Annecy’s tribute, Torresan took AWN through his journey from Rio to Los Angeles, and the characteristics that have helped propel Brazilian artists to the top of the world.

AWN: Were you exposed to animation growing up? When did you develop an interest and passion for animation?

Ennio Torresan: My first memory of animation was James Whale’s 1931 Frankenstein. I was five years old and snuck into my parent’s party after waking up from a nightmare and Frankenstein was playing on TV. All the adults were so busy talking to each other, that they didn’t notice me glued to the TV. From that day on, I could hardly tell the difference between animation and classic horror films. Apart from their obvious technical differences, they both share a tendency for drama and caricature.

AWN: What was your path to learning your craft and becoming a professional? Was there good quality training available in Brazil back then?

ET: My high school teachers discouraging me from following any path in the arts was a very important psychological training ground. I was born with the artistic curse and there was nothing that could veer me from it. I eventually learned the technical aspects of animation by watching all sorts of movies, frame by frame, on a home VCR. My mother was certain I was going crazy. AWN: Was staying in Brazil for your career an option for you? Did you always see yourself working overseas?

ET: Our first elected president after 20 years of military dictatorship froze all bank saving accounts. Luckily for me, I started sending around the pencil test of El Macho I had been working on for the previous six months, which enabled me to get a paid job in animation in London and that way, I was able to support my mom and sister from abroad. Hollywood happened unexpectedly later. After hungrily accumulating experiences in all other animation departments, I was able to increase my chances of being desired by the studios in Hollywood.

AWN: What were the biggest challenges you faced as an aspiring Brazilian artist? What are the challenges for young artists today?

ET: I cannot think of a bigger challenge then having someone aspire to be an accomplished artist, anytime, anywhere. However, today we have more tools to create and more opportunities to sell and showcase our work. Earning a somehow decent living is now at the hands of the artist in ways never imagined before. In this market, comes fierce competition promoting creativity, which is the key ingredient to success nowadays.

AWN: What were the common ambitions of your fellow aspiring Brazilian animation artists back then?

ET: To be accepted in Annecy with an animated short, then get a real job at a bank back home, or become an art teacher. We never thought this thing would last a lifetime. Not in Brazil. We were cavemen drawing on the walls of a zoetrope.

AWN: How do you think those ambitions have evolved over the years given the growth of the industry? What are the current opportunities for Brazilian artists, creators and storytellers? ET: As I was saying, back then we lived in caves and had the occasional kill. Outside that cave we would be destroyed by the cruel and unfriendly reality of a dry market, so we stayed in that cave awaiting that occasional kill. Today you can do a semester at CalArts and sell two projects at once, to one of the biggest studios in the planet. I would compare thirty-five thousand years of human history to these last 25 years of animation history in Brazil.

AWN: Which are your favourite Brazilian animation artists, directors, films or shows?

ET: The ones who finished their shorts or feature films or TV shows are the envy and admiration of everyone, including me. To tell you the truth, I love and admire them all. I have no favourites. They’re all insane people and I have the upmost respect for all of them. I feel like the luckiest Brazilian animation artist in the world for being one of them and for having my short selected to help showcase Brazilian animation in Annecy. I am very lucky!

AWN: Do you think you bring any specifically Brazilian characteristics to your role as a Story Artist?

ET: We are magic realists at our core, part of a genre of Latin American literature where reality and fable mix together. Macunaima and 100 Years of Solitude were some of many books I devoured growing up, and I believe I was able to bring some of these influences into my work in Hollywood. Also, coming from a place of economic instability and extreme inequality, kind of gives you the flexibility and thick skin you need to thrive in this role. Storyboarding is RE-boarding, countless times, one film after the next, and hopefully forever until death do us part.

In terms of talent and creativity, not at all. We story artists are all the same no matter where we came from: an obsessive, compulsive need to tell stories, producing hundreds of drawings daily. Pure madness.

AWN: Why is the international exposure at Annecy important for the Brazilian industry? What are your hopes for Brazilian animation in future?

ET: [Annecy 2018] is the best thing that ever happened to Brazil after Marcos Magalhaes’ Cannes award, and the creation of Animamundi Film Festival, and most recently the international projection of Rio 2096: A Story of Love and Fury and Boy and the World. These four events were necessary to brings us here today to Annecy.  I hope this will inspire even more young artists to help solidify our local industry. It would be a crime to stop now!

Torresan’s El Macho and Until Sbornia Do Us Apart will be screened at Annecy 2018 as part of the festival’s homage to Brazilian animation.

Torresan is currently seeking partners and funding for his slate of projects in development. Those interested may contact producer Renata Fazzio: renata@apocalipso.com, enniotorresan@gmail.com.