I Have a Question Patrick Smith 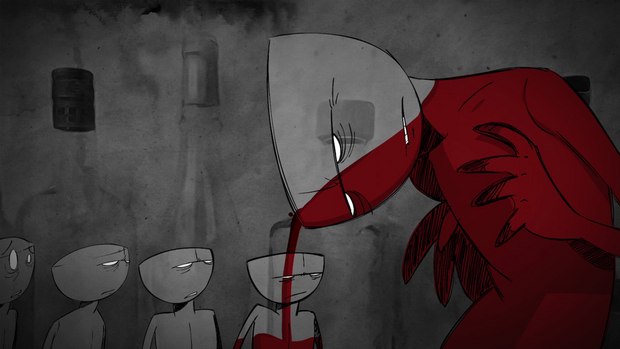 Animator Patrick Smith is known for his bizarre metaphorical short films about individuality, relationships, and politics. Smith made his directorial debut for the MTV series “Daria.” His formative years were spent as a storyboard artist for Walt Disney, and other major studios in New York and Los Angeles. He recently served as Animation Director for the PBS series, Blank on Blank and just completed his most recent short film, Pour (2017).

Patrick agreed to meet me at a pottery bar in a small town near West Yorkshire. We drank a lot and reminisced about past loves as we patiently fashioned handmade mugs that we smashed the moment they were finished. It was afternoon. The weather was moist. The year was then.

I get the greatest pleasure from a Dry Cachaca shaken with squeezed limes, I add sugar if I’m feeling fragile.

The trait I like least about myself is the way I speak. I really do have good thoughts in my head, I just communicate at a level of a 14-year-old.

The book I value above all others is Art Spirit by Robert Henri.  I gave a copy to my father, a catholic deacon, and he declared it to be a religious text. A (non-family member) person I have high respect for is Signe Baumane, filmmaker.  She’s given her life to her art.  I just don’t have the guts to do that. People that live their work deserve respect. I’m certainly not one of them.

The song that makes me tingle is Twinkle Twinkle Little Star, which I just realized is the same as the ABC’s, that really messed with me when I discovered that.

The funniest thing that happened to me was when I once saw Roger Ebert eating a slice of pizza, then walking into a pole and being knocked unconscious.