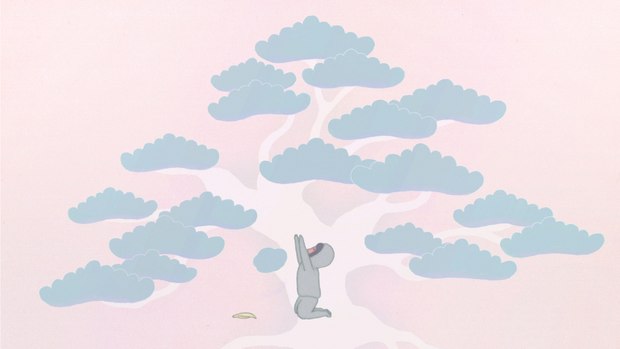 You don’t see a lot of sensuality in animation, especially of the surreal type that involves everyday stuff like snow, futons, and strawberries, but such is the way of the work of Japanese animator, Yoriko Mizushiri. Although she’s only made three short films to date (Futon, 2012, Kamakura, 2013, Maku, 2014), they’ve all done well on the festival circuit and solidified Mizurshiri as an integral and unique voice in the animation world.

The softness and sensual nature of Mizushiri’s work is enhanced by her choice of colours and her emphasis on line movement. “The most important thing in my animation,” Mizushiri says, “is the movement of the line. But I cannot draw too strong a line or the softness will be lost. If you keep your color while consciously seeing a soft thin line properly, you will inevitably have a lot of light colors. Especially thin pink and purple are colors that relate softness and feel of the body to me.”

Mizushiri’s films captures fragments of life - either in the subconscious or real world. She finds beauty in these overlooked, in-between spaces of life...the small gestures or moments (whether they are in memory, desire, reality) that maybe go unnoticed most of the time (like the beauty of lying in bed or, in this case, a futon, when you're not ready to get up yet and you are half asleep still...and your mind and body drift into memories and sensations).

There is a patient, calm rhythm to Yoriko Mizushiri's films. They are in no hurry to move or even to explain. It’s up to the audience to openly engage their senses and feel the film in their own manner. It’s a striking contrast to a world very much in a hurry to go somewhere yet, while feckless running about, they’re actually missing those many, fleeting, beautiful moments that are the essence of existence.

Olaf Gets His Bambi Moment in ‘Once Upon a Snowman’
Glen Keane Talks Believing the Impossible in ‘Over the Moon’
Focus on My ‘Vote:’ Six Point Harness Delivers Election-Themed Animated Music Video for ABC’s ‘Black-ish’
Genndy Tartakovsky Talks ‘Primal’ and Telling Stories Without Words
Matthew A. Cherry: 'Animation Can Do Anything Live-Action Can Do'
A Brave Young Girl Fights to Save the Planet in ‘Astronaut Spaceman’
‘Trash Truck’: Max Keane’s Personal, Precious, and Nostalgic Preschool Series
The Shins ‘The Great Divide’ Takes a Reverse Zoom Journey Through the Big Bang
END_OF_DOCUMENT_TOKEN_TO_BE_REPLACED