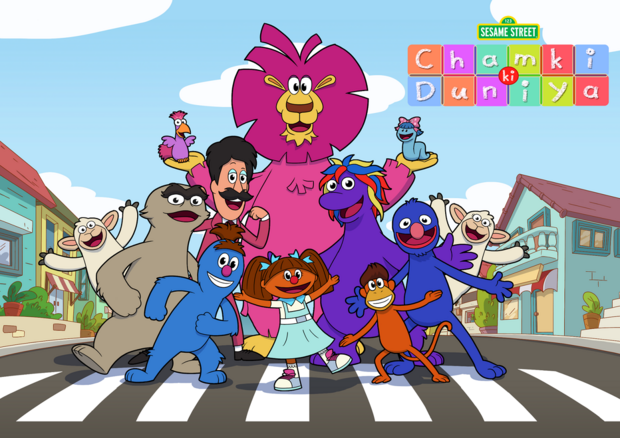 Chamki ki Duniya is the second venture between Turner and Sesame Workshop. Previously, both companies had partnered to create five seasons of Galli Galli Sim Sim, the Indian adaptation of the popular American series, Sesame Street. Inspidea, an animation studio in Kuala Lumpur, has been commissioned for the animation of the series.

Commenting on the launch, Mark Eyers, Chief Content Officer – Kids Networks at Turner International Asia Pacific said, “Chamki ki Duniya is a unique show that not only will be the first completely animated series by Sesame Street, but will also encourage social and emotional development of children in a narrative that is fun and entertaining. Turner has always believed in setting benchmarks for creating innovative and engaging content. With the largest portfolio of local content in the kids’ genre, we strive to create content and characters that resonate with children.”

Chamki ki Duniya takes young viewers on a journey with five-year-old Chamki, an adventurous and inquisitive schoolgirl, anxious to learn more about the world. A warm, sensitive and friendly girl, Chamki is always surrounded by her group of friends from the galli, who love playing games, making music and solving mysteries around them. Chamki ki Duniya addresses topics such as early literacy, creative thinking and reasoning, family and community life, healthy habits, appreciating cultural plurality and many more via compelling and humorous stories, music and art. The series is targeted towards children between two and six years of age.

“It’s wonderful to work with Turner and Inspidea to bring the beloved Chamki Muppet to kids and families in this beautiful new animation,” said Sashwati Banerjee, Managing Director, Sesame Workshop in India. “Being smart means knowing so much more than letters and numbers. Chamki ki Duniya’s curriculum is designed to engage the whole child and seeks to help kids grow smarter, stronger and kinder.”

Andrew Ooi, Managing Director of Inspidea said, “We are delighted to have partnered with Turner and Sesame Workshop in producing this path breaking series that aims to subtly and humorously educate children. After detailed research and development with Turner and Sesame Street, we created a visual style for Chamki Ki Duniya which is charming yet playful that can resonate with Indian audiences and be culturally relevant.”

Chamki ki Duniya is sponsored by MetLife Foundation as part of its global “Dream, Save, Do: Financial Empowerment for Families” campaign. Part of the content in the series is intended to improve knowledge, language and strategies on financial literacy and increase the dialogue between parents and children to help them make informed choices around spending, saving and sharing to help them realize their financial and non-financial goals. Parents and children are also encouraged to upload their stories and share their dreams and aspirations as part of the campaign on the Dream Wall available on www.galligallisimsim.com/saving.