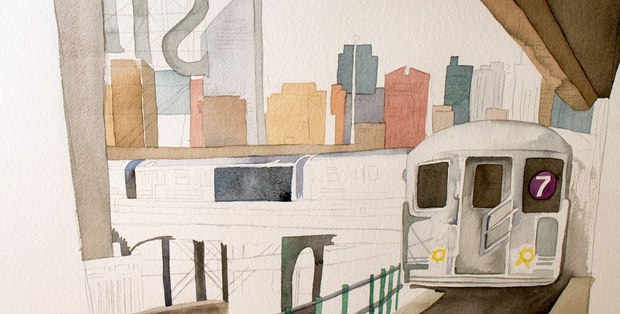 “In 2005 I took a trip to India and saw the country through the eyes of an adult for the first time,” explains Sai Selvarajan. “Little moments from my travel journal came together in this film, which in some ways personally represents being a part of two places, even if the story is not autobiographical.”

Sai says he’d long wanted to collaborate with his wife, painter Amanda Selvarajan, on a project. Her watercolors were an ideal medium to represent the narrative of Sugarless Tea, which the director wanted to unfold as if moments of recollection or the pages of a childhood storybook. To be as unobtrusive to the creative process as possible, Sai rigged a camera with a wireless trigger that Amanda could control as she painted. She and Sai began the painstaking process of documenting the story, in painterly sections, which Sai brought together at Lucky Post.

The film was a unique creative demand for the artist and the final product reflects an exploration of the painting process itself under the accelerated demand of production. “I was almost finished with the first painting and I had to acknowledge that it was no good. So I scrapped it and started over. It was tough, but good, to not have the luxury of reflection,” recalls Amanda Selvarajan. “It brought tears to my eyes to see my watercolor painting on the big screen. There's nothing quite like that. Seeing the elements culminating into one product is pretty amazing. I'm so proud of everyone who worked on the project.”

Key to the story’s vitality was casting the right voice over. Sai contacted Hari Kondabolu, a noted comic whose material is often rooted in identity and politics. He became the embodiment the characters of Sugarless Tea, providing the narration and voices for the film.

“As an Indian-American who grew up in Queens and is very close to my brother, this film really resonated with me and I knew immediately that I wanted to be a part of this project,” notes Hari Kondabolu. “The script reads like poetry, while maintaining very honest human interactions and connections. Though it focuses on India and New York City, there are universal elements of family, love and loss that can connect to anyone. It was a privilege to be a part of this project.