Pixar fans get a first look at the volcanic mountain Uku from the studio’s forthcoming short film, ‘Lava.’ 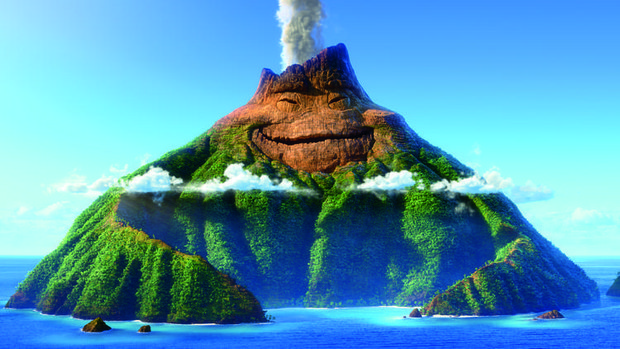 Pixar may be taking the year off, but next year the studio will return with Inside Out, the new film from Pete Docter (Up), and with it comes a new Pixar animated short film titled Lava.

Inspired by the isolated beauty of tropical islands and the explosive allure of ocean volcanoes, Lava is a musical love story between two mountains -- Uku and Lele -- that takes place over millions of years.

Courtesy of the Los Angeles Times, today we have a first look at Uku.

Directed by James Ford Murphy, the seven-minute short is set to premiere at the Hiroshima International Animation Festival in Japan in August.

The musical love story features a song titled "Lava," which Murphy wrote after learning to play the ukulele in order to pitch the project. The song in the film will be performed by Hawaiian recording artists Kuana Torres Kahele and Napua Greig.

In keeping with the studio's philosophy that short films should advance the technology used in Pixar's features, Murphy and his producer, Andrea Warren, grappled with achieving the sense of scale live action filmmakers derive from a helicopter shot. Such shots are difficult to achieve within the world of 3D animation, where computers can choke on that much visual information.

U.S. audiences will get to see Lava when it hits theaters in front of Inside Out on June 19, 2015.