‘The Hero of Color City’ Now Available on VOD

An imaginative tale chronicling the adventures of a diverse band of crayons as they strive to protect their magical multihued homeland, ‘The Hero of Color City’ is directed by ASIFA-Hollywood head Frank Gladstone. 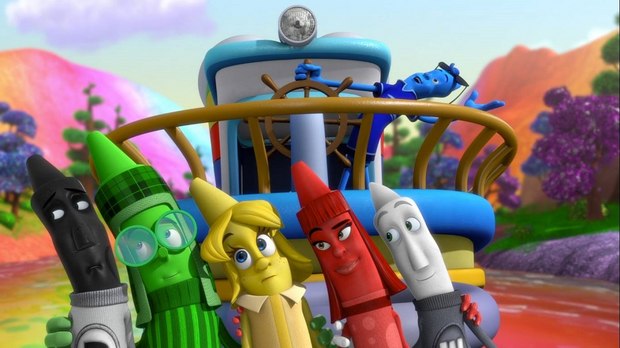 Here’s a nifty independent ‘toon you won’t want to miss. Directed by ASIFA-Hollywood executive director Frank Gladstone, The Hero of Color City is an imaginative tale chronicling the adventures of a diverse band of crayons as they strive to protect not only their magical multihued homeland, but the imaginations of children everywhere, from a terrifying monster called Scrawl.

Starring Christina Ricci as the timid Yellow, Craig Ferguson as Scrawl's loyal, buzzing sidekick Nat, Rosie Perez as the spunky and fiery Red and Wayne Brady as the smooth and popular Blue, The Hero of Color City was written by Jess Kedward, J.P. McCormick, Kirsty Peart and Rich Raczelowski. The star-studded cast also includes Owen Wilson as the voice of Ricky the Dragon, Sean Astin as the voice of Horatio, and Jessica Capshaw as Duck.

Each night, when Ben falls asleep, his Crayons jump into their magical Crayon Box which transports them to their home in COLOR CITY, a world of dazzling hues, soaring fantasy and the whimsy of childhood. This land is fed by an enchanted rainbow and waterfall that provides the City and its citizens with color.

When YELLOW, our timid heroine, is accidentally left behind in Ben's room, she inadvertently awakens two Unfinished Drawings: KING SCRAWL, a huge, powerful, mute monster -- and GNAT, Scrawl's motor-mouthed, overactive sidekick. In search of color for themselves, they follow Yellow to Color City, causing panic and concern. If Scrawl and Gnat can claim the waterfall for themselves, Color City will fade, and along with it, our lovable crayon characters will disappear.

It's up to Yellow and a motley crew of Crayons, bodacious and brave, BLUE, meticulous, fussy GREEN, satirical RED, pessimistic BLACK and overanxious WHITE to save the day. Meeting with fantastical creatures and fun adventures along the way, Yellow discovers she has more courage and strength than she knew and learns to believe in herself and to count on the support of her friends.

Replete with valuable life lessons, this enchanting story will entertain and inspire in a stunningly rendered and utterly unique animated world.

Produced by Exodus Film Group and released by Magnolia Pictures, The Hero of Color City saw a limited theatrical release beginning October 3, and is still available on SVOD platforms.

Check out the trailer, and an adorable PSA, in the video players below: