Merging pop culture, comedy, and musical theatre, ‘Garbage Musicals’ is a hilarious new series of parodies from The Tin Can Brothers, Wisecrack and ArcadeCloud. 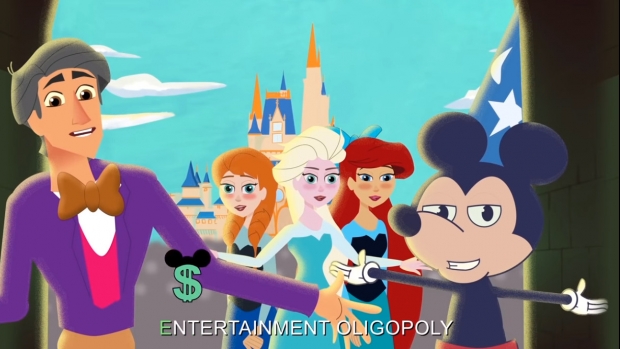 From the fertile, if slightly addled minds of LA entertainers, The Tin Can Brothers, comes an animated homage to Broadway shows that never were…musical theatre that would have riffed on pop culture in a snarky but cute and funny way…if they existed, which they don’t.

In the first four episodes of the new YouTube series, Garbage Musicals, a smart, witty collaboration between the Tin Can Brothers, media brand Wisecrack and ArcadeCloud gaming animation channel, you'll experience a festive mélange of show tunes you’ve never heard before about pressing social issues you're not aware of, like the Sad Keanu Meme, the Flat Earth Conspiracy, and a dad’s struggle to reconnect with his daughter…by learning Fortnite.

But the episode we glommed onto fastest was Disney Domination the Animated Musical. As the liner notes explains, Disney owns theme parks, Marvel, Fox, Star Wars, ABC, ESPN, and Hulu... but it's never enough for the Mouse House! Join Mickey and the gang as they explain the business of the Disney empire and just what the heck an Entertainment Oligopoly is as only Disney can... as a catchy Sing-Along musical!

Watch, listen and learn! You can find the entire set of Garbage Musicals on the show’s YouTube channel.

The idea for Garbage Musicals came about last summer when Omnia Media acquired the digital video and podcasting company Wisecrack. The folks behind YouTube shows like Thug Notes and The Philosophy of Everything started looking for synergies where they could pair their unique, humorous take on pop culture with Omnia’s animation skills via its ArcadeCloud channel. One day, Wisecrack co-founder Jacob Salamon was watching HBO’s Theranos documentary (The Inventor: Out for Blood in Silicon Valley) about Elizabeth Holmes and thought to himself, “Wow…the Theranos story would make for a great ironic musical!”

Salamon had already been looking to work with the talented LA-based musical theatre and comedy troupe, Tin Can Brothers (Corey Lubowich, Joey Richter, and Brian Rosenthal), who were a spin-out of the massively popular StarKid Productions. With these creative pieces now all aligned, Garbage Musicals quickly came together.

To produce the show, the full team picks episode ideas based on what’s going on in current pop zeitgeist. According to Salamon, “We choose topics we feel would make for interesting commentary and parody. Then Tin Can Brothers work on developing the perspective for each episode, calling back to important musical numbers you’d find in larger, high-production musicals – for example, ‘the love duet’ or ‘the refusal of the call.’ Then they work with their extended network of composers, songwriters, and performers to produce a fantastic piece of music that becomes the core of each episode. From there, they work with Roarke Boes, VP of Production at Omnia Media, to find an animator that matches with the style and themes of each episode; they collaborate until the episode meets our standard. It’s a tough and long process from idea to final episode, but it’s a huge labor of love – and a ton of fun to see these come to life!”

“We’re super happy with the reception of our first four episodes!” Salamon adds. “Our audiences love them, and we’re excited for where this series might go. We hope to continue making more great and unexpected episodes soon!”