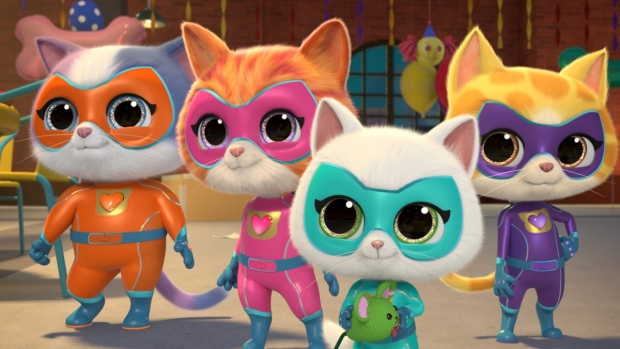 Disney’s latest exciting preschool series features a soft, sparkly, and super gang of felines ready to take on whatever diabolical parrots, cat burglars or hot-headed chihuahuas come their way. SuperKitties, debuting Wednesday, January 11, has campy humor, feel-good themes, and lots and lots of color. Premiering with a simulcast on Disney Channel and Disney Junior (10:30 a.m. EST), the series will also release an initial batch of episodes the same day on on-demand platforms and Disney+.

“Being able to create a world where everything is so stylized, to lean into the behavior of real cats, to make sure that we stay true to the mantra that being superheroes is what these characters do but being cats is who they are, all of that contributed to what sets it apart from other preschool shows,” notes executive-producer Paula Rosenthal, a children’s entertainment industry veteran and Emmy Award winner known for Sunny Day, Peter Rabbit, Gaspard and Lisa, and Olivia.

Co-executive producer Kirk Van Wormer adds, “We’re always looking at flexing our creative muscles and showing what we can do, and I think it shows in the animation.”

“It came at a time I was in the middle of working on one show and thinking about what the next one would be, and noticed there was a void in the marketplace,” shares Rosenthal. “There were lots of shows with animals, lots of shows with superheroes, but none that combined the two. And, as a cat lover, I thought this could be the perfect opportunity. I'm also a huge fan of those old superhero shows that are a little campy and a little quirky. So why not lean into that and create a team of fabulous felines who are fighting a pantheon of over-the-top villains, which is sort of a key tenet to any superhero show.” Each episode of the show features two 11-minute stories that highlight the SuperKitties as they receive a "SuperKitty Call," from one of their animal friends, with a problem that only the SuperKitties can help with. The "SuperKitties" voice cast includes Emma Berman (Disney-Pixar's Luca) as Ginny, Cruz Flateau (CoComelon) as Sparks, JeCobi Swain (ABC's Home Economics) as Buddy, and Pyper Braun (Country Comfort) as Bitsy.

Though the characters’ hero abilities are leveled up for production value, they aren’t a far cry from the real abilities of cats’ Rosenthal and Wormer did considerable research in considering the elastic design of their 3D-animated heroes.

“In approaching the way we built these characters, we wanted them to behave like cats, and to fight crime like cats,” says Wormer. “We were looking at far too many cat TikToks and videos. Honestly, we just had to be able to write off the internet, because that's what we love. And it's humorous. And cats already are kind of superheroes. They can jump to the top of the fridge and get anything they want. Ginny, our SuperKitties leader, is one of those springy cats whose parkour—which cats do in real life—we wanted to make look as easy as pie, even when she’s going from building to building.

Rosenthal adds, “Even with Sparks, who is our brainiac, the idea that he had created this SuperKitty Com and rides it was inspired by a TikTok video of a cat riding around on a Roomba.”

The ramped-up-but-relatable backbone, in Wormer’s opinion, is one of the show’s most unique attributes and one he’s particularly proud of, especially when it came to lighting and the cat’s eyes. Believe it or not, their design had nothing to do with the TY Beenie Boos. “We had all this color in their eyes already and were looking for ways to bolster it even more and make them really distinguishable,” says Rosenthal of the SuperKitty crew. “So, of course, we added lots of glitter. We were already working so hard on the irises and how the irises contract and open so that they are more cat-like and the glitter felt like a natural complement to that, knowing that we were going to rely on the eyes to do some of the acting.”

The glitter feature is present in more than just the characters’ eyes. Puffs of glitter also appear as the SuperKitties assemble into their crime-fighting gear. The glitter already adds an extra layer of flare to the animation, but its hypnotic glow comes from the production’s lighting.

“We were blessed on the show to have a really unique lighting system that is more like real light,” explains Wormer. “There's real sunlight in our world. And so, what that glitter does for us, other than just being pretty, is that it flashes like a cat’s eye when it catches the light. So, our characters turn and then, suddenly, it's all sparkle. I just love the way that our real light interacts with their fur and their outfits and the grass and everything, but especially their eyes.”

There’s a lot of glam to behold in the world of Superkitties, to be sure. But with more than a decade of experience in kids programming, Rosenthal hopes that her new series, geared toward ages 2-7, will also leave lasting impressions on viewers in the way they see the world around them. “We started scripting and doing this at a time when the world was changing,” says Rosenthal. “It became more polarized in some ways. And I became keenly aware of what a great opportunity it is to create content for our youngest audience. Because, if you could change one mind, you've really done your job.”

Likewise, Wormer hopes that, if their audience becomes as fond of the crime-fighting-cat force as they have, the lessons they learn watching the episodes may stay with them for years to come and pave the way for more stories from Superkitties. As Rosenthal notes, “There are always many more stories to tell and many more ways to hit those benchmarks.”

“We all have those favorite shows that we grew up with and that you realize, later in life, really affected the way that you view the world, in a positive way,” Wormer says. “That's the big hope, that Superkitties becomes one of those shows a kid carries with them all their life. We would honestly love for adults to sit down and watch this with their kids, and maybe learn something along the way about empathy.”

Choc Chip Animation Riffs on Pop Culture in ‘The Art of Murder’
F is for Flake: The (Not So) Great Animation Robbery?
Re-VIEW: ‘Avatar: The Way of Water’ – A Miraculous Vision
‘Kung Fu Panda: The Dragon Knight’ Celebrates a Special Lunar New Year
END_OF_DOCUMENT_TOKEN_TO_BE_REPLACED