Creators Michael Cusack and Zach Hadel guarantee that their new animated comedy series, premiering January 9 on Adult Swim, will make you feel better… unless, you know, it doesn’t. 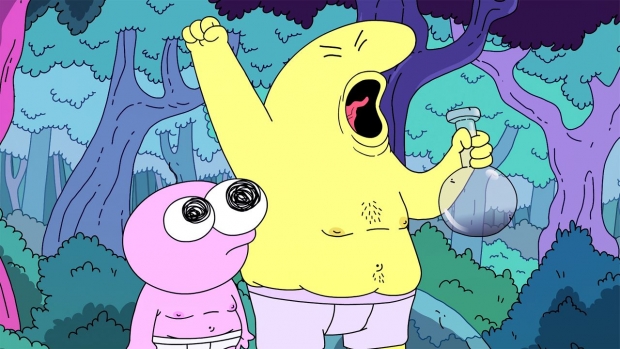 If there’s one thing we can all use after a terrible, horrible, no-good year (Years? Decade? Anyway, it feels like an eternity…), it’s something to cheer us up. Enter Smiling Friends, a quarter-hour 2D animated comedy series created by and starring Michael Cusack and Zach Hadel that premieres January 9 on Adult Swim. (In fact, the show’s pilot first debuted on the network in 2020 as part of its annual April Fools’ Day stunt and has since become one of the most watched episodes on AdultSwim.com.)

The American-Australian series follows the employees of a small company dedicated to bringing happiness to the inhabitants of a world both entirely different from and uncomfortably close to our own. Operatives Charlie and the eternally optimistic Pim are tasked with one bizarre challenge after another as they do their best to fulfill their mandate to make people feel better. Or, as the show’s trailer puts it: “They're guaranteed to cheer you up… unless, you know, they can't for some reason.”

Here's a quick clip from Episode 2 to whet your appetite:

So where did the idea come from? And what was the development process like? And are the best parts of life really just finding momentary distractions to keep yourself busy so you don’t think about the harsh realities of life for a second, as their first client rhetorically asks?

In our interview with the show’s creators, we decided to start with the easy ones.

“So, Zach and I were at a chicken place in Burbank,” Cusack recalls, "and we were trying to figure out something we can do for TV. We were just throwing around different ideas, but it wasn’t feeling quite right. And Zach said, why don't we do a suicide hotline-type thing? They cheer people up. And that's when it clicked.”

While Cusack says the characters aren’t based on Hadel and him, the voices are very similar to ones they were already doing. “We were, like, why don't we just be more natural?” he continues. “It'll be more improv-y, and we'll just have more conversational kind of dialogue. And that's kind of how a show formed.”

“Michael had done stuff on YouTube, and I had done stuff on YouTube, but we were kind of in our own circles,” adds Hadel. “I think one of us reached out to the other, and we started to realize that we had pretty similar sensibilities. So, we started developing this thing, and it slowly just got sewed together. We really liked the conversational realism, and we tried to figure out how to best execute that.” The goal, Cusack says, was always to make a series.

“We both grew up loving South Park and The Simpsons, and we just felt like newer adult animation didn't have what we wanted,” he explains. “And in what we do on YouTube, we are very meticulous about animation. Shots are usually crazy, with a lot of stuff going on. We wanted to bring something fresh to TV animation.”

Picking up on this thread, Hadel says that their experience creating for YouTube helped determine not only the content, but also the structure, of the show.

“There was an early conversation about how long the episodes should be,” he relates. “And we realized that, with streaming, people could go back and re-watch them. When we would make YouTube videos, they'd be two minutes long, but they were so packed with information that people would replay them 10 times or whatever. So, we said, why don't we take a half-hour show and condense it into 15 minutes? Basically, we tried to build “re-watchability” into the show, rather than make a slow-paced thing that people don't need to see again.”

“That was an ongoing struggle for us,” Cusack confides. “We didn’t want to fall into the trap of, oh, we're just going to tell a story, and get the characters to say the lines, and then animate it. We were always asking, how can we make this better? How can we make this funnier? We wanted to make something that was as close to pure comedy as possible.” In addition to writing the scripts and doing the voices for Smiling Friends, Hadel and Cusack have also been intimately involved in the character design and visual look of the series.

“We do have a team of designers, and animators, and storyboard artists, of course,” says Cusack. “But we are very involved in the lead designs, and the boarding thumbs, and things like that. And when we're getting backgrounds and animated shots back, we watch every single one. We'll go in and do a red line, or sometimes even finish a design or element ourselves. We knew it was going to be hard, but we learned so much and it was so worth it in the end.”

Regarding the production team, Cusack and Hadel explain that it’s a “hybrid” that was assembled from a variety of components. For the pilot, they partnered with Six Point Harness, who handled all the nuts and bolts of the production process, while their friends' studio, Yotta, did the animation. Then, for the series, while retaining a number of individuals who worked on the pilot, they also brought in a group of people from Princess Bento Studio, the animation company formed by Fox Entertainment’s Bento Box and Australia’s Princess Pictures.

Asked about their personal favorite parts of the process, Cusack didn’t have to think about it before answering. “I love the voices,” he enthuses. “I love that the most because it's performing and acting. It just feels like it's the funniest. And writing's fun when you're just throwing out ideas. The best part is when we're just laughing and coming up with all this dumb stuff.”

“For me, it’s probably the design,” Hadel says. “Before the show, we sat down and sketched a million drawings. That part is fun, when we're just thinking of characters and just making each other laugh. ‘Oh, what if this guy looks like this?’ But also the voices, specifically the voices when we're going back and forth, where it's not just a character delivering a line for a plot reason, but kind of talking over each other realistically.” Finally, like many independent animators who sign on for a TV series or a feature film, the biggest challenge for both Cusack and Hadel (apart from having to navigate through a pandemic) was learning to play well with others.

“You go from just doing everything yourself – you write the idea, you animate it all yourself, you put it out by yourself – to working with a team,” says Cusack. “And now you've got to wrangle people, like background artists, and designers, and just general admin and production staff. And you've got to learn how to communicate your vision, to get that across in the best way. And that was a learning curve.”

“Yeah,” Hadel concurs. “Besides learning to communicate exactly what you want, you also have to figure out what’s really important. If there’s a detail that doesn't look great, but it’s not important to the joke or to the story, sometimes it’s better to let it go.”

On the other hand, as they discovered, there were also some unexpected benefits – as well as a different kind of challenge – in working with a team.

“It was also a learning curve in that sometimes you'd tell someone to do something a certain way,” says Cusack. “But then you'd get something back that was better than what you were imagining. It screws with your mentality a bit. Because then you're like, ‘Oh wait, we've got the vision, but that's better.’ So, you’ve got to let go of your ego a bit and think of what’s best for the show. That's good to remember.”