Each week Chris Robinson takes a look at great films from animation’s past.  This week he takes a look at another rare NFB short (this time from Grant Munro) called, Toys. 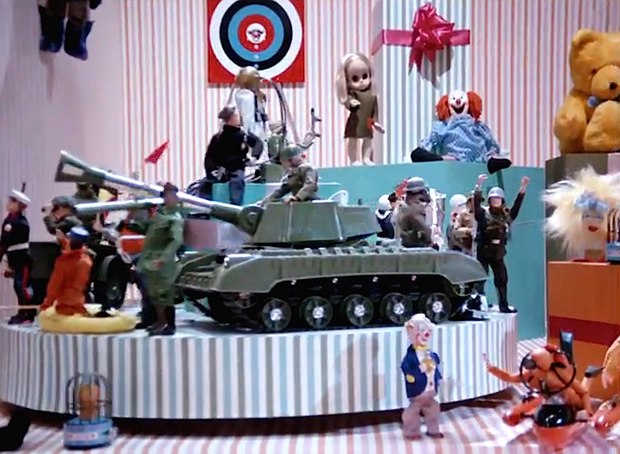 I wasn’t planning on screening back to back NFB films, but I’d heard rumours that Grant Munro (now 93 and living in Montreal) wasn’t doing so well (apparently, he’s actually doing ok). Anyhow, that inspired me to see if any of his films were around in the virtual world. I quickly stumbled upon this oddity, Toys (1966). With December in full swing along with endless cautionary tales about violence and mass culture (of course, action figures have been superseded by video games and online content) that carry on from generation to generation, Munro’s little known short (that blends photos, live action and stop-motion) like an apt choice as we head into the Holidays.

What’s begins (backed by a neat-o soundtrack that seems taken from Beach Blanket Bingo) as an innocent portrait of children excitedly viewing an assortment of toys ahead of Christmas quickly turns into a haunting, apocalyptic tale of war and devastation that leaves the kiddies a tad shell shocked.

You can be damn sure they won’t be asking Santa for any military toys after this, right?

Apparently, Munro’s horror fable did little to sway children or parents then or now. As Don McWilliams writes on the NFB website: “Imagine Grant Munro’s dismay when he received the following letter: ‘I saw your film entitled Toys on Channel 10, December 28, 1971. Where did you get those marvelous war toys? My children are now so disappointed in their Christmas presents. The gifts they received can’t compete with the great creations you employed. Please advise me of where you purchased these ingenious war toys. Birthdays are coming and I do want to get some.’”

But hey…  let’s be fair, those clown toys are far more terrifying than any of those tanks and helicopters and fake dead soldier figures.