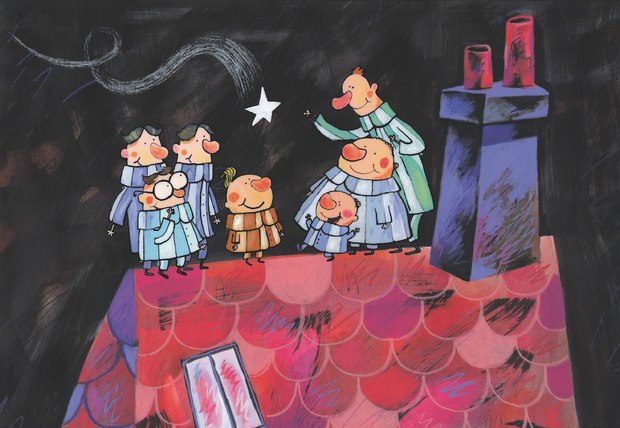 “Artistic directions, says Folimage founder, Jacques-Rémy Girerd, “have always prevailed over economic parameters. It was in my DNA, I guess.” For 36 years, the French animation studio, Folimage has been quietly skirting the boundaries between industry and art by creating some of the most beautiful and original short animation for all manner of audiences. Led by the creative impulses of Girerd, Folimage has also inspired the creation of a school (the acclaimed, La Poudriere), and developed a highly regarded residence program that has welcomed international animators to come to Folimage to create their own short film. Among the many who’ve participated are such animation luminaries as Michael dudok de wit, Konstantin Bronzit and Regina Pessoa.

Jacques-Rémy kindly agreed to chat with me the studio’s evolution.

Le Moine et le Poisson / The Monk And The Fish from Folimage on Vimeo.

What is your animation background? What led you to want to become involved in animation?

I had no idea what I was going to do with my life. For lack of anything better, and while waiting for my lucky star, I spent my time on the benches of the medicine university. I was also writing, playing music, scribbling, drinking with friends, watching movies every lunch, travelling ... Later, I went to the school of fine arts in Lyon and by chance, I discovered the magic of animation.

La Grande Migration / The Great Migration from Folimage on Vimeo.

Can you tell me about the origins of the studio?

I created the studio Folimage in 1981. I am no longer sure about my original motivations. It's so far away. I would not fool the readers and make them believe in a beautiful fictional story. It was a storm of circumstances. After leaving the school of fine arts, I had small jobs, and then decided to experience animation. It turned out to be quite exciting. The first film had some success. The city of Valence gave me some budget to create a small studio. Over time, film enthusiasts, graphic designers, illustrators joined me. Step by step, the studio evolved in a happy-go-lucky way. I consider this long adventure as a big stroke of luck. And the valuable skills of the employees have done the rest.

What were your goals then and how did they change over the years?

To be honest, I didn’t have any specific goal by that time, except expressing what was burning my guts: the will to create, to imagine, to tell, to invent stories. Once the studio was created and the first teams were at work, I quickly felt as a prisoner of this never ending dynamic: the pioneers were expecting a lot from me. I could not leave. So I have made one movie after another one, both as a director and as a producer. I must say that I enjoyed the collective work, even though I deeply wanted to work alone.

Une vie de chat / A Cat in Paris (BA) from Folimage on Vimeo.

Folimage has always had a very independent vibe to it.. Was this conscious? Did you ever aspire to achieve Aardman’s success?

Most of Folimage's films were personal nonstandard adventures, far from the main stream. This very free, creative way of doing things was our reason for living. We didn’t give a shit of what was being done elsewhere. Only matter the desire to make sincere personal works and to get in touch with the public, especially the younger ones. Regarding our sources of inspiration, when they exist, you should dig into our artistic and cultural heritage: Folimage is closer to Raoul Dufy than to Aardman, and to Matisse than to Disney.

The studio also developed a school, La Poudriere. Why? Was it simply to feed new talents into the studio?

Absolutely not. Twenty years ago, many young people contacted Folimage in order to learn how to make films. We could not meet all requests and moreover, we were not trained to do that, in an organized and thorough way. Therefore, I had the idea to create this school, I wrote the project and it opened in 1999. La Poudrière is a unique free school, without any teacher, only professionals who stop by the school. A “piccola scuola” somehow. And it works! La Poudrière is recognized by the government, as one of the only three national cinema schools, which delivers a high level professional diploma.

You've also had a number of international animators work at the studio through a residence program. Can you talk a bit about this program, why it was started and how it's developed?

Folimage did not just produce movies, it tried to question animation, to embrace the whole field of animation: by creating a festival, getting involved in initiatives with the young public, curating exhibitions, pedagogical packs, and even by dealing with distribution. It has also created an artists' residency that welcome foreign directors each year to create a personal work.

Tragic story with happy ending from Folimage on Vimeo.

I understand you're not with the studio anymore. What was the reason behind that and how difficult is it to step aside from something you created?

You shouldn’t listen to forked tongues. I still have my office in Folimage. I have just launched a new project of a TV adaptation of the comic book artist Riad Satouf’s work of and another adaptation of the graphic designer Marion Montaigne’s weblog Tu mourras moins bête. I certainly stepped a bit away because of my age. It gives me more time to write and take care of the small group around. On the other hand, I do not feel I am the owner of this project which owes so much to all those who have crossed its path.

Thanks to Clemence Bragard for translation