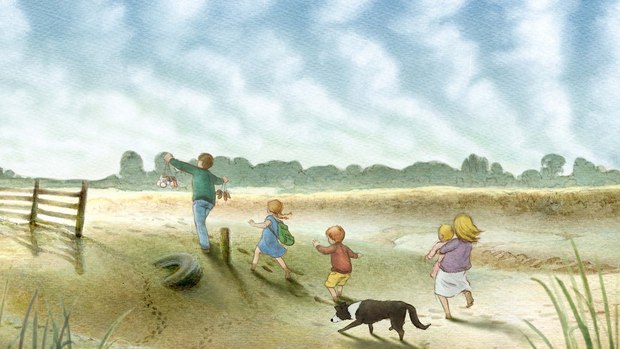 LONDON -- The voice cast has been announced for Channel 4, Lupus Films and Walker Productions’ charming animation We’re Going on A Bear Hunt which is set to air this Christmas. The half hour film will expand the universe of the much-loved book for a truly festive family treat. Olivia Colman (Broadchurch, The Night Manager), Pam Ferris (Matilda, Call the Midwife) and Mark Williams (Harry Potter, Father Brown) will breathe life into the brand new characters of Mum, Grandma and Dad respectively. Michael Rosen, who wrote the best-selling book, will play the Bear. Based on the hit bedtime book written by Michael Rosen and illustrated by Helen Oxenbury and produced by the makers of the hugely-popular The Snowman and The Snowdog animation, We’re Going on a Bear Hunt follows the intrepid adventures of siblings Stan, Katie, Rosie, Max, the baby and Rufus the dog, who decide one day to go on an adventure in search of bears.

Coming up against a host of obstacles the family ventures through whirling snowstorms, thick oozing mud and dark forests on their ambitious quest.  But when Rosie and Rufus become detached from the rest of the party it looks like bear-hunting might not be such fun after all.

Channel 4 will broadcast the one-off half hour special this Christmas, bringing to life the irresistible story and beautiful artwork of the 25 year-old children’s classic. Made with exquisite, hand-drawn animation, the film is set to enchant a whole new audience with its story of perseverance, optimism and a love of nature. Olivia Colman, who plays Mum, said, "What appealed to me about the story is the bond the family have - they care for, and look after, each other. Another wonderful aspect of the story is that it’s kids enjoying a natural adventure with their imaginations, fresh air and the wilderness.  I love that they commit to their adventure…I would like to go with them!”

Piers Wenger, Head of Drama for Channel 4 added, “We’re delighted to welcome Olivia, Mark and Pam on board this fantastic family adventure, and Michael playing the bear is an inspired touch. It’s a brilliant cast for a brilliant, classic story; I can’t wait for Christmas.”

Camilla Deakin, producer for Lupus Films, commented, “We are thrilled to have attracted the services of such a high-calibre cast to bring our grown-up characters to life. Olivia Colman, Pam Ferris and Mark Williams are wonderful actors with highly distinctive styles and we’re delighted that they are joining us for this timeless adventure, along with Michael Rosen who makes a very convincing bear!”

We’re Going on a Bear Hunt is produced by Ruth Fielding and Camilla Deakin with Norton Herrick as executive producer for Herrick Entertainment and Helen McAleer and Julia Posen as executive producers for Walker Productions. Joanna Harrison and Robin Shaw are co-directors. It was commissioned for Channel 4 by Jay Hunt, Channel 4 Chief Creative Officer, Piers Wenger, Head of Drama, Beth Willis, Deputy Head of Drama and John Hay, Head of Specialist Factual.

We’re Going On a Bear Hunt is a Lupus Films Production in association with Bear Hunt Films, Walker Productions and Herrick Entertainment for Channel 4 Television Corporation. The animated film is being distributed internationally by Union Media.