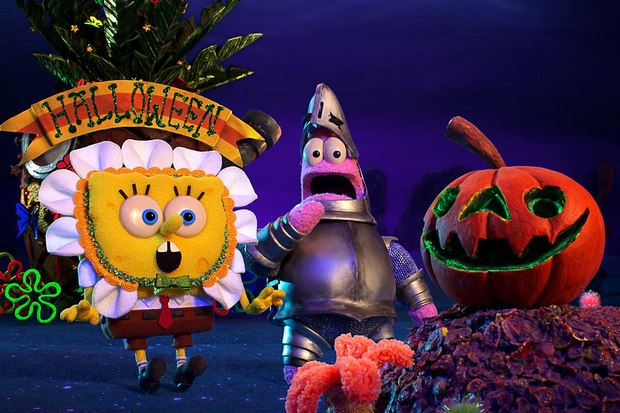 BURBANK, CA -- Kids cable net Nickelodeon will take viewers on a spooky Halloween adventure throughout Bikini Bottom with the brand-new, stop-motion special, SpongeBob SquarePants: The Legend of Boo-Kini Bottom. In the visual style of classic stop-motion animation TV specials, The Legend of Boo-Kini Bottom tells the story of the Flying Dutchman (Brian Doyle Murray) who wants to make sure everyone in town is scared, especially SpongeBob, who thinks scary things are funny. The special will premiere in October 2017.

Bikini Bottom is decked out for Halloween and features Sandy’s treedome as a mad scientist’s lab, including a giant remotely operated Acorn Monster; Mr. Krabs’ restaurant as “The Horrors of the Chum Bucket,” displaying scenes of Plankton torturing food; and Plankton’s restaurant as “The Horrors of the Krusty Krab,” telling the story of Mr. Krabs turning customers into Krabby Patties and more.

The characters don Halloween costumes, with SpongeBob as a flower, Patrick as a knight, Sandy as a mad scientist, Mr. Krabs as a dollar bill, Plankton as a devil, Squidward as himself, and Karen as a cat. SpongeBob SquarePants: The Legend of Boo-Kini Bottom features an original song, “The Scare Song,” written by Mr. Lawrence, music by Eban Schletter and performed by the Flying Dutchman’s crew of pirate ghosts.

The Legend of Boo-Kini Bottom is being produced at Screen Novelties, a Los Angeles-based stop-motion animation production company, where miniature puppets and sets bring Bikini Bottom to life in three dimensions. The production features 27 unique sets, across five stages, where 15 boxes of breakfast cereal were used to create texture on Bikini Bottom’s coral reefs; eight pounds of glitter were used to decorate SpongeBob’s Halloween pineapple house; hundreds of popsicle sticks created the planks of the rollercoaster track that Patrick and SpongeBob ride; and “black lights” were used to create a fluorescent glow across the puppets and sets.

Marc Ceccarelli and Vincent Waller are the supervising producers on SpongeBob SquarePants. The special was written by Lawrence, with Brian Morante serving as the storyboard director. The special is being directed by Mark Caballero and Seamus Walsh, and produced by Chris Finnegan of Screen Novelties.

SpongeBob SquarePants is voiced by Tom Kenny as SpongeBob SquarePants, an incurably optimistic sea sponge who lives in a pineapple under the sea; Bill Fagerbakke as Patrick Star, SpongeBob’s silly best friend; Roger Bumpass as Squidward, an aloof cashier of The Krusty Krab and SpongeBob’s neighbor; Clancy Brown as Mr. Krabs, SpongeBob’s boss and greedy owner of The Krusty Krab; Carolyn Lawrence as Sandy Cheeks, Bikini Bottom’s only resident rodent aquanaut and scientist; and Mr. Lawrence as Plankton, owner of the Chum Bucket and chief rival of Mr. Krabs.

SpongeBob SquarePants is executive produced by creator Stephen Hillenburg, who previously worked as a writer, director and creative director on Nickelodeon’s animated series Rocko’s Modern Life. Hillenburg graduated from the California Institute of the Arts with a master’s degree in experimental animation and studied marine biology and art as an undergraduate. Hillenburg created and executive produced his first feature film, The SpongeBob SquarePants Movie, which debuted Nov. 19, 2004 and his second theatrical, The SpongeBob Movie: Sponge Out of Water, hit theaters Feb. 6, 2015. The series is produced at Nickelodeon in Burbank.