BOURNEMOUTH, U.K. -- Outpost VFX announced the delivery of more than 420 VFX shots for Johannes Roberts’ intense survival film, 47 Meters Down. Outpost VFX was the sole VFX vendor for the film, which was released on June 16.

Over five months, Outpost VFX harnessed the talents of a team of 40 talented artists to build an impressive slate of key sequences, including various close-up shots of the 3D sharks, a CG cage that plummets into the depths of the ocean and ferocious attack sequences.

Produced by Tea Shop & Film Company, 47 Meters Down tells the story of two sisters who travel to Mexico, only to become trapped in a dive cage on the ocean floor. In shark-infested waters, the pair struggle to survive both a dwindling air supply and the advances of these terrifying aquatic beasts.

The film’s Director, Johannes Roberts, worked closely with on-set VFX Supervisor Sean Mathieson, who was brought on by Outpost VFX to create a tense, visceral and immersive survival experience. When asked about Outpost VFX’s work on 47 Meters Down, Roberts said: “Just phenomenal work. I’m speechless how good you guys are.” 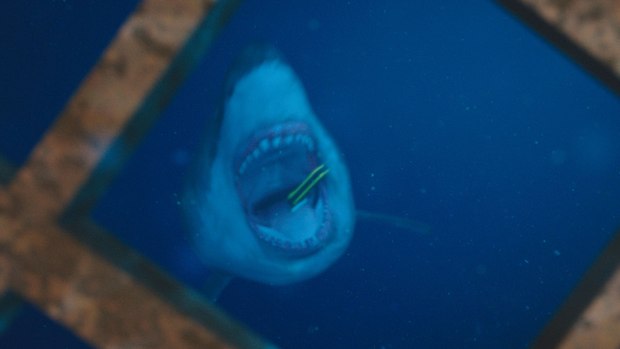 “47 Meters Down was a real breakthrough opportunity for Outpost VFX to show what we are capable of producing,” explained McWilliam. “Being the sole VFX vendor on the show across such a broad range of VFX disciplines was fantastic for our team to really flex their creative and technical muscle. This show really accelerated the development of our in-house proprietary tools and pipeline and now gives us a great calling card for creature and environment work across VFX-heavy shows.”

“Since creating this film back in March 2016, the studio has doubled in size and worked across a series of Hollywood blockbusters including Life, Jason Bourne and Nocturnal Animals,” continued McWilliam. “With Electric Dreams and Final Score currently in production at the studio, our team is being constantly challenged to create incredible work. With the release of 47 Meters Down, we hope to springboard off its success and be seen as a go-to VFX facility on large-scale features in the future.”