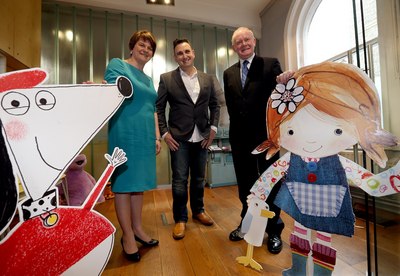 BELFAST, IRELAND -- Children’s television producer Sixteen South has opened a brand new, four-floor animation studio in the heart of Belfast to accommodate the growth of the business and the company's production slate.  The £1m building was officially declared open by Northern Ireland's First Minister, Arlene Foster, and deputy First Minister, Martin McGuinness, at a special ceremony.

With 7,500 square feet and room for 110 seats, the new studio can host four productions in-house and has a dedicated recording studio, dubbing suite, six edit rooms and a finishing suite. The facilities are perfect for Sixteen South's current projects.  the company is currently in production with a second series of its hit mixed animation series Lily Driftwood Bay and is about to start production on a brand new series, Claude (52 x 11’) for Disney EMEA, Australia and New Zealand.

Meanwhile, new animated series Claude, which is based on the much-loved, best-selling series of books by Alex T. Smith and follows the humorus adventures of a little beret-clad dog, has just been picked up by Disney Junior for broadcast throughout Europe, Middle East, Africa & Australasia.

First Minister, Arlene Foster remarked, “The move by Sixteen South to this new animation studio represents a £1m investment and commitment to the sector and marks the next chapter of the Sixteen South success story. The creative industries in Northern Ireland contribute over £329 million to the local economy and I, and my Executive colleagues are committed to support further growth in this sector. The development of the Film & TV industry remains a crucial part of the creative economy in Northern Ireland and while other large-scale productions can sometimes be seen as taking the plaudits, it is appropriate to highlight that the animation sector here is extremely buoyant with our animated productions far reaching and screened globally."

The deputy First Minister, Martin McGuinness added, “For EMMY nominated and BAFTA winning children’s television production company Sixteen South to invest £1 million in this state of the art animation studio in Belfast as part of a relocation to a larger 7,500 square foot premises is a real boost to the local creative industry. This relocation is about more than opening an animation studio. Rooted in the local creative industry this move signals the scale of Sixteen South’s global appetite, drive and determination. This new studio is hugely exciting, not just for the 100 people who will work here but for our entire creative industry."

Colin Williams, Founder and Creative Director of Sixteen South, said, “We were delighted to welcome the First and deputy First Minister to officially open our new Belfast studio. In 1884, this building was home to the Clarence Finishing Company, a leading exporter of the finest linen handkerchiefs.  Today, we’re proud that it’s the home to one of the city’s new industries, where we make television for children in every country.”

Sixteen South has been making award winning television shows for children for almost ten years including Pajanimals, produced in partnership with The Jim Henson Company, Big & Small, Sesame Tree, a partnership with Sesame Workshop, and their BAFTA and IFTA winning Big City Park.