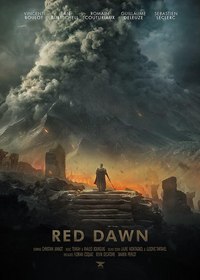 French CG academy ArtFX has unveiled its first student film, Red Dawn, which was created by the school of visual effects and CG animation’s 2016 graduating class.

The film was selected by a professional jury comprised of representatives from more than 28 studios including Industrial Light & Magic, MPC, Double Negative, The Mill, Framestore, DreamWorks Animation, One of Us, Nvizible, Mac Guf Ligne, Mikros Image, Cube Creative and BUF Compagnie.

Directed by Sébastien Leclerc, Vincent Boulot, Jean Burtschell, Romain Couturiaux and Guillaume Deleuze, Red Dawn is inspired by a quote from Swiss moral philosopher Henri-Frédéric Amiel: “Vanity presides high on a mountain; everything on the plain below seems irrelevant.”

The story draws a parallel between two destinies, that of a king and that of a volcano. They confess to us their regrets and their incapacity to manage their own power.

Watch Red Dawn below, and be sure to check out the making-of video and stills further down: