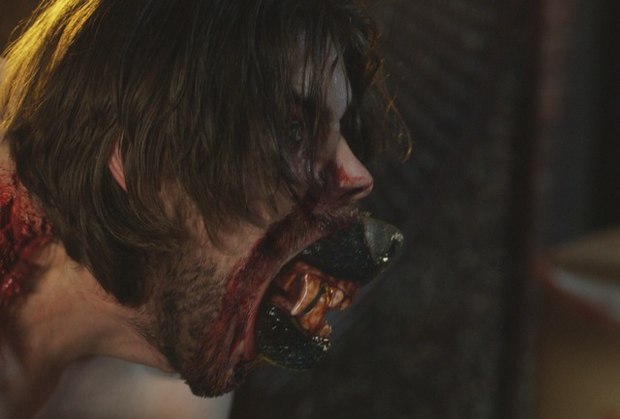 Los Angeles, CA & Vancouver, BC -- Award-winning character effects company MastersFX has been nominated by the Visual Effects Society for a VES Award in the category of Outstanding Visual Effects in a Visual Effects-Driven Photoreal/Live Action Broadcast Program in conjunction with its work on Season Two of the hit Netflix horror/thriller series Hemlock Grove.

MastersFX pioneered several new approaches for Hemlock Grove to create an amped-up level of FX for the show’s second season. The company created several updated, monstrous classics, including vampires, shape-shifters and mutated humanoids. In addition, the show’s iconic werewolf metamorphosis, conceived and produced by MastersFX, was highly acclaimed by critics and fans alike as setting a new benchmark for transformation effects. The company’s two studios -- Los Angeles and Vancouver -- have both developed pipelines to bring their practical art and digital methodologies together. “What is noteworthy about our VES Award nomination this year is the mixing of onset Makeup-FX with our in-house digital techniques -- in this case, we were able to present a ‘real’ werewolf’s snout emerging out of ‘real’ actor Landon Liboiron,” Masters said. “We call this technique dMFX or Digital Makeup FX. This is the first time the Visual Effects Society has recognized this type of work, which has captured our industry’s imagination. We are so honored by our 2015 VES Award nomination.

“With the success of several practical FX heavy projects -- The Walking Dead, The Grand Budapest Hotel and Interstellar -- filmmakers are renewing the value and the use of physical FX instead of just CG solutions,” Masters adds. “Even J. J. Abram’s new Star Wars movie touts their use of practical effects -- to many a fan’s delight!”

Finding a recent resurgence in this art form, Masters and his team have been offering client filmmakers the choice of integrating practical FX into their projects for nearly 30 years. With its combined approach, MastersFX is one of only a few companies that have harnessed and perfected the mixing of both practical and digital FX.

“When you have multiple 'mixed-media' solutions available, you can flexibly tailor each project to its own specific needs; for budget, schedule and a realism, that’s right for its particular requirements,” notes MasterFX visual FX supervisor Andre Bustanoby. “The old saying: ‘If all you have is a hammer, everything looks like a nail’ is not how we work. How we mix and blend practical and digital FX is not dissimilar to music -- there was a time when synthesized sound was all-the-rage, but we all got tired of that processed, soulless feeling. Like practical FX is now doing, music evolved back to a more authentic and relatable experience, with real instruments and renewed soul. Much like our organic makeup FX work, digital tools are an instrument that accompanies others and helps us blend the magic - without losing performance or personality. At the end of the day, we will use the best tool for the job at hand.”

Beyond their current work on Season 3 of Hemlock Grove, MastersFX is also actively creating and producing effects for Season 2 of NBC’s The Night Shift, a series about life in the emergency room at San Antonio Memorial Hospital; The Expanse for SyFy, a thriller series set 200 years in the future that follows the case of a missing young woman in a race across the solar system to expose the greatest conspiracy in human history; and the CW series iZombie, Rob Thomas’ small-screen adaptation of the DC/Vertigo comic book series centering on a young medical student turned zombie who must hide the fact that she’s undead from her friends and family.

In addition, MastersFX’s dMFX/Digital Makeup Division is currently working on Season 5 of the hit TNT series Falling Skies, for which MastersFX has provided creature effects since it first launched. The MastersFX dMFX division also recently provided FX work to the comedy film Dumb & Dumber To, and to the just completed Sony feature, Beautiful & Twisted, starring Rob Lowe and Candice Bergen.