Laguna College of Art and Design brings grads and industry pros together at industry open house. 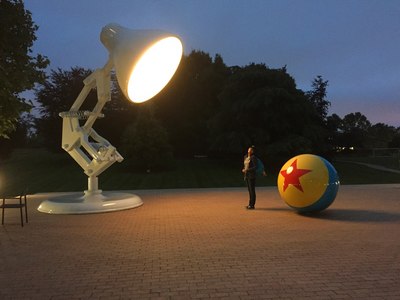 Pooja Shah, who graduated with her BFA in Design + Digital Media last month, scheduled four interviews for full-time positions after she met with representatives at IOH.

“We had to submit pieces to be juried as well as provide copy and content for the brochure and website,” she explained. “It was well worth the effort to make sure we had our business cards, websites and takeaways prepared because it led to a lot of opportunities to interview and make contacts.”

Bob Dennis, chief creative officer of the International Guild of Masters - Entertainment Design, who has art directed world class theme parks for 25 years, attended LCAD Industry Open House. He met four students he would like to hire for a children’s book project related to a theme park in the Philippines.

“Every student I met shook my hand and looked me in the eye, and through our conversations, they understood the reality of the career path they need to take,” Dennis commented. “Their work showed their strength in drawing and sketching, which is foundational in this industry. LCAD is a school that prepares its students for careers.”

Jennifer Sari, Writer/Producer and Owner of Angel Heart Productions, has hired 11 LCAD animation students for a wide range of jobs such as clean-up animators, in-betweeners, colorists and managers.

“The consistent problem I found when I have tested students is that they are missing the fundamentals of art: basic drawing and painting skills and their portfolios do not include the standard things that most studios look for,” Sari said. “But what I found with LCAD students was that their skills were significantly higher all around. Up until now, most of our artists have only been professionals with studio experience. But we have since hired a number of LCAD students. So what this told me was that the difference is LCAD’s teachers. Students at LCAD have a real advantage in studying with Disney animators, people who have actually worked in the industry. As a result, LCAD graduates are more prepared to work in the professional world."