Jay Leno to Guest Star in ‘Phineas and Ferb’ Special 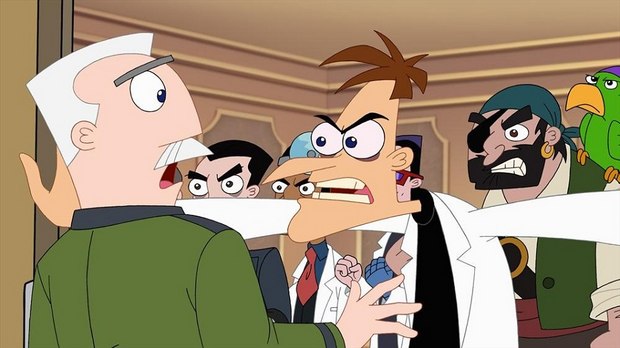 Leno plays the voice of Major Monogram's boss, Colonel Contraction of the O.W.C.A. (Organization Without a Cool Acronym), in the special episode in which Phineas, Ferb and the gang host a global summer concert -- just as Doofenshmirtz's latest "-inator" invention moves the Earth, putting summer itself in jeopardy.

Produced by Disney Television Animation, the one-hour special "Phineas and Ferb Save Summer" will be available beginning Friday, May 23 on WATCH Disney XD for verified users online, on smart phones and tablets and Disney XD On Demand via several affiliates.

The schedule of additional summer episodes is as follows (all times ET/PT):

"Father's Day" -- With Perry's help, a distraught Doof tracks down the precious lawn gnome that was repossessed many years ago from his father in an effort to heal old wounds. Meanwhile, Phineas and Ferb build an antique biplane to fulfill their dad's dream for Father's Day.

"Imperfect Storm" -- Phineas and Ferb create a wind amplification device, while Doofenshmirtz plans revenge on his childhood foe, Grulinda, by using his Sog-inator to rain out her garden tea party. Meanwhile, Mom's backyard makeover gives Candace hope that her dream of busting her brothers will actually happen. Guest starring are Elizabeth Banks as Grulinda and Simon Pegg as landscaper Pierre.

"The Return of the Rogue Rabbit" -- When Isabella and the Fireside Girls' marionette show turns out less than spectacular, Phineas and Ferb offer their help. Meanwhile, Doofenshmirtz helps Perry's nemesis Dennis the Rabbit break out of the O.W.C.A.'s high security prison.

"It's No Picnic" -- Isabella plans an impromptu picnic for Phineas when the rest of the gang have plans of their own. Meanwhile, Doofenshmirtz uses a Teleport-inator to send his daughter to a movie marathon.

"Klimpaloon Ultimatum" -- Love Händel's song "The Ballad of Klimpaloon" is nominated for "Best Fact-Based Song" at the Tristies, the tri-state area's music award show sponsored by Random Swimwear. But when the existence of the magical, human-like bathing suit Klimpaloon is questioned, Phineas, Ferb and the gang must travel to the Himalayas to prove his existence and validate Love Händel's nomination. Guest starring is Jon Stewart as Mr. Random, President of Random Swimwear.

"Operation Crumb Cake" -- Isabella sends a letter to Phineas admitting her true feelings but instantly regrets her decision and desperately tries to get it back. Meanwhile, Doof invents an Unretrograde-inator to reverse his bad luck.

"Mandace" -- Doof invents an "-inator" to disguise himself as the local pizza delivery boy in an effort to get warm pizza, but Candace gets hit by the ray and uses her new delivery boy appearance to find out what makes boys tick.