Flying Bark Productions confirms that Seven Network Australia is commissioning broadcaster for a brand-new series, ‘The Wild Adventures of Blinky Bill,’ set to air in 2016. 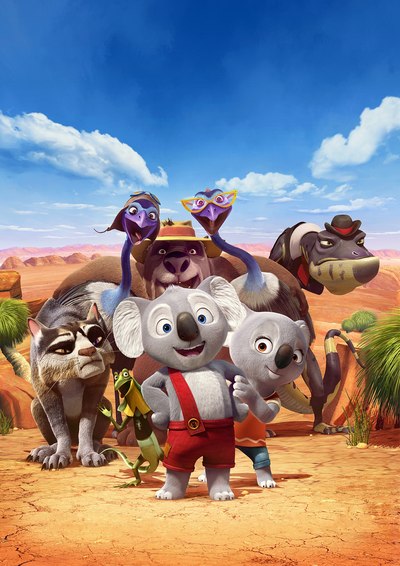 Hot on the heels of the highly anticipated feature film release this September, it has been announced that Blinky Bill will be back on Aussie TV screens next year -- completing the comeback of Australia’s favourite Koala.

Flying Bark Productions, the Australian production company responsible for reviving the animated Australian icon, confirmed that Seven Network Australia is commissioning broadcaster for a brand-new series, The Wild Adventures of Blinky Bill, to be aired in 2016.

The new series, set a few years after the feature film, sees a slightly older Blinky taking on the role as defender of his outback home, Greenpatch. With a bevy of crazy Aussie animals, the series brings back a number of familiar faces, as well as introducing new characters including Blinky’s best mate and sidekick, Jacko. True to its roots, the show will continue to embody a quintessentially Aussie spirit, expressed through mischief, mayhem, adventure and humor.

“We’re really excited that Channel Seven has commissioned the series so that we can bring Blinky Bill to a new generation of Aussie fans. The series will be an Australian production, in association with Telegael (Ireland) and Giant Wheel (India), featuring an all-Australian cast,” said Barbara Stephen, Managing Director of Flying Bark Productions. “The Blinky Bill stories of today continue to celebrate Australia’s vibrant flora and fauna, classic iconography and cultural values first introduced in the original stories that so many people grew up with, but we have an added modern feel to engage the next generation of Blinky fans.”

The Wild Adventures of Blinky Bill, which consists of 26 episodes, will air on Channel 7 in 2016.

Distributed by Studio Canal, Blinky Bill: The Movie opens in cinemas across Australia in September 2015. The film explores universal themes including the importance of community, survival in a harsh climate, the love between children and their parents, and “mateship.”

First introduced to audiences in the 1930’s through a series of children’s books, The Complete Adventures of Blinky Bill is considered a quintessential Australian children’s classic. The title has never been out of print in Australia. In 1992, Yoram Gross Film Studios – now Flying Bark Productions -- produced the iconic Blinky Bill feature film, Blinky Bill: The Mischievous Koala. The film has sold around the world, including in territories such as the U.K., Germany, Austria, Switzerland, Belgium, Poland, Yugoslavia, Greece, Ukraine, Bulgaria, Hungary, Indonesia, Australia and New Zealand -- generating almost A$3.5 million in gross receipts.

Blinky Bill: The Mischievous Koala was followed by several successful television series, which aired extensively in the U.S. and continue to air around the world today in over 80 countries, including Germany [WDR], France [Canal J], Island [TG4], Italy [Viacom Networks], Spain [Telephonica], Hungary [MTV], Africa, Australia [ABC] and New Zealand -- generating almost A$18 million in gross receipts. The 1990s Blinky Bill TV series is still on air in Australia and regularly rates in the top 20 children’s programs on ABC TV.