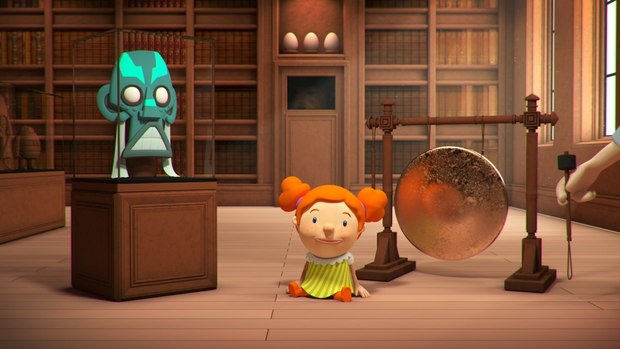 Manchester U.K. -- Celebrating a decade in business, Manchester’s Kilogramme Animation recently gathered the local animation community together to celebrate the launch of production on the third episode in the studio’s popular short film series, Tall Tales. The animated shorts are based on white lies told to inquisitive children in answer to their innocent questions. Part 1 asked “Where do milkshakes come from?” and Part 2 took a darker twist answering, “Why do I have to be quiet on the train?” The shorts take the audience to a world where bouncing cows, mysterious doors and evil bears roam free.

Tall Tales has garnered a mass of critical acclaim, with both Part 1 and 2 winning the Big Chip Award for Best Use of Animation. Part 2, which has been shown at festivals, was also awarded the prestigious Vimeo Staff Pick.

Earlier this month, 24 artists, illustrators and comic book artists from Manchester and beyond joined together to create an exhibition of brand new artwork inspired by the Tall Tales Films. The exhibition celebrated Kilogramme’s 10th birthday, and also the launch of a crowdfunding campaign on Kickstarter  to complete Part 3 of the series. Those attending the exhibition included animators from nearby Cosgrove Hall, Mackinnon and Saunders Digital, and Brown Bag Films.

“We are blown away by the talent and enthusiasm of all the artists involved and to see the community gather to celebrate the launch,” Tall Tales director Jon Turner said of the exhibition. “We can’t wait to see where the next Tall Tales takes us.’”

“It’s an absolute thrill to see my characters interpreted by such amazing artists in their own style,” added Tall Tales character designer Emma Reynolds.

As well as concept art and character designs on display, there was a screening of Parts 1 and 2, which were self-funded by director Jon Turner and a small team of dedicated freelancers. With Part 3, Kilogramme is stepping up its game with plans for ambitious sea scenes and dynamic animation techniques, reveling in the opportunity to offer viewers something dark and different from the limitations of broadcast fare.

“This kind of independent short film making allows our stories to be told the way they were intended, with a dark twist – for both children and adults to enjoy,” Turner said.

The Kickstarter campaign for Tall Tales Part 3 ends on July 31st. Campaign rewards include an in-depth making-of blog, giving an intimate look into the animation process from start to finish, along with prints, an art book, and the chance to be animated as a character in the film.