Legendary Estonian director of animated classics including ‘Hotel E’ and ‘Drivers in the Rain’ is abruptly dismissed from his post as a head of the Animation Department at the Estonian Academy of Arts. 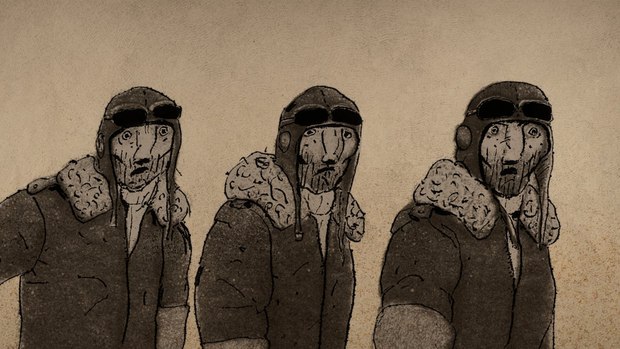 Priit Pärn’s 2014 film, ‘Pilots on the Way Home,’ was co-produced by the NFB and won the Grand Prix at the Fredrikstad International Animated Film Festival in Norway.

Legendary Estonian animation director Priit Pärn has abruptly been dismissed from his post as a head of the Animation Department at the Estonian Academy of Arts, according to a report by German media org Kultuur.

Pärn and his wife, Olga, need little introduction. The husband-and-wife duo have lent black humor, playful surrealism and a unique graphic style to their work over the years, beginning with Pärn’s first animated short, Is the Earth Round? (1977), with production company  Eesti Joonisfilm. Pärn went on to direct some 20 short animated films, some of which are acknowledged classics, receiving numerous international awards and honors. His film Hotel E (1992) was included in the list of the 100 best animated films of all time published in 2006 by the Annecy International Animation Film Festival, as well as the list of the 50 best animated films published by the International Animated Film Association (ASIFA) in 2010. This latter list also includes Déjeuner sur l’herbe, which Pärn directed in 1987.

Other notable works include Breakfast on the Grass (1987), 1895 (co-directed by Janno Põldma), and Night of the Carrots (1998). His 2010 short, Divers in the Rain, (co-directed with Olga Pärn) has won 18 international awards, and his latest project, Pilots on the Way Home, which was co-produced by the NFB and released in 2014, won the Grand Prix at the Fredrikstad International Animated Film Festival in Norway, among other awards.

Pärn was reportedly dismissed from his duties both as a teacher and a Head of the Animation Department two days ago, following a special academic evaluation undertaken at the request of Dean of the Faculty of Fine Arts Andres Tali. The Dean allegedly indicated that Pärn's desire to work closely with his partner Olga complicated things. Pärn's contract, which began in 2014, was set to run through 2019.

The dismissal has caused an uproar among Estonian Academy of Arts animation students, many of whom had decided to attend the school because of Pärn, and who are now concerned they won’t be able to complete their films under his guidance.