CULVER CITY, CA -- In celebration of Open Season’s 10th Anniversary, Sony Pictures Animation will present an all-new animated movie, Open Season Scared Silly, on Blu-ray Combo Pack, DVD and Digital HD March 8th. This national debut, from Sony Pictures Home Entertainment, is the latest release for one of the most successful animated franchises to date, bringing back Elliot, Boog and all of the beloved woodland creatures from the previous Open Season series. The fourth installment is a comedic mystery adventure directed by David Feiss (head of story on the original Open Season and creator of the popular TV series Cow and Chicken); produced by John Bush (TV’s The Simpsons); and featuring computer animation from Rainmaker Entertainment, Inc.

“My affection for these characters has only grown since we introduced them in Sony Pictures Animation’s first feature,” Feiss commented. “We’re having a lot of fun bringing them back for a new adventure, it feels like a big party with old friends.”

Most recently, Feiss, whose prolific career began as a story artist for Hanna-Barbera, directed four mini-movies for the home entertainment release of Sony Pictures Animation’s Cloudy With A Chance Of Meatballs 2, entitled Steve’s First Bath, Super Manny, Attack Of The 50 Ft. Gummy Bear and Earl Scouts.

Open Season: Scared Silly is a heartwarming tale incorporating wholesome values and laugh-out-loud fun for all ages. Bonus materials including all-new featurettes, bloopers, a director’s commentary track, and an Inside Sony Pictures Animation profile of director David Feiss. The first featurette, available on both formats, “Open Season Super Speedy Re-Cap” will give viewers a look back at the previous three films, and some of the most exciting moments of the franchise. Exclusive to the Blu-ray, Scaredy Pants: The Fears of OPEN SEASON will tackle what our favorite characters are truly afraid of, “Stepping Into the Spotlight – Mr. Weenie’s Process” gives a glimpse into Mr. Weenie’s trials and tribulations of shooting his most trying scenes for the brand new movie, and a collection of bloopers and outtakes will have family members of all ages giggling in their seats. The film has been rated PG for Rude Humor and Some Action.

Open Season: Scared Silly features the voice talents of Donny Lucas (Boog), Will Townsend (Elliot & Mr. Weenie), Trevor Devall (Shaw), Kathleen Barr (Edna & Bobbi), Garry Chalk (Ed), and Melissa Sturm (Giselle). Boog and Elliot are back in an all-new adventure when Elliot tells a campfire story of a monster in the woods. Boog, who has never been the bravest of bears, becomes very scared. His best friend Elliot comes up with a crazy plan to scare the fear out of Boog. With the help of Mr. Weenie, McSquizzy and the rest of their forest friends, they embark on a memorable journey where the power of friendship helps Boog overcome his fears with lots of laughs and some surprises along the way! 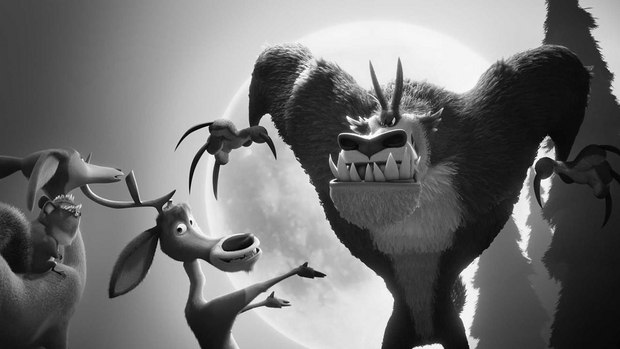