Henson’s ‘Splash and Bubbles’ Set for World Premiere at MIPJr

Ocean-themed animated series produced by The Jim Henson Company and Herschend Enterprises is scheduled to debut in fall 2016 in the U.S. on PBS KIDS. 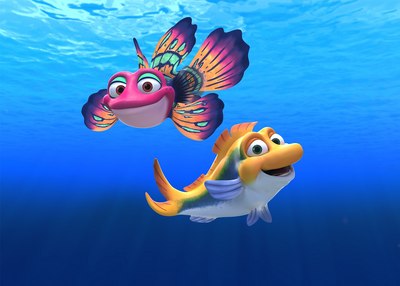 PARIS -- MIPJunior has announced the 2016 MIPJunior World Premiere TV Screening of Splash and Bubbles, produced by The Jim Henson Company (Dinosaur Train, Sid The Science Kid, Doozers) and Herschend Enterprises (Dollywood, Harlem Globetrotters), and scheduled to debut in fall 2016 in the U.S. on PBS KIDS.

Featuring 80 x 11 minute episodes, Splash and Bubbles dives into marine biology and ocean science to encourage kids aged 4–7 to explore the diversity and spectacle of our natural undersea world. Through humorous characters and fun-filled storylines, supported by lively music with a Motown flair, children everywhere will soon be exploring the ocean alongside their favorite new underwater friends.

Splash and Bubbles is produced using the Emmy Award-winning Henson Digital Puppetry Studio, a proprietary technology from Jim Henson’s Creature Shop that allows puppeteers to perform digitally-animated characters in real-time, enabling the animation to be more lifelike and spontaneous. The result is a unique and fresh look that is unlike traditional CG. Herschend Enterprises will support the series with broad-reaching location-based entertainment including live-shows and experiential attractions at theme parks, aquariums and other venues.

“Splash and Bubbles has received an enthusiastic response from the entertainment community since we first announced it, and we are fortunate to have such strong partners on board who share our passion to introduce children to the vast world of marine biology,” commented Lisa Henson, CEO, The Jim Henson Company.

“We are excited to partner with The Jim Henson Company, a world-class family entertainment company, to create life-changing emotional connections between children and the ocean,” added Andrew Wexler, CEO of Herschend Enterprises. “Through Splash and Bubbles themed experiences, we can bring the same memories created every day in our aquariums and theme parks to children’s living rooms and lives.”

“Reed Midem’s MIPJunior is the perfect way to present the world premiere of our newest series Splash and Bubbles to the industry,” commented Richard Goldsmith, EVP, Global Distribution, The Jim Henson Company. “Featuring colorful characters, humorous stories and vibrant music, it is destined to be a hit with children around the world, inspiring them to learn more about our ocean and the diverse life teeming within it, and encouraging them to care for this essential part of the world we all share.”

Splash and Bubbles follows the adventures of Splash, a yellow fusilier fish who has migrated all over the ocean before settling down in Reeftown, where he befriends Bubbles, a Mandarin dragonet whose vivid orange and electric blue coloring matches her colorful personality. Until Splash came along, Bubbles and most of the other Reeftown residents had no idea what lived beyond the cozy confines of their coral walls. Together, Splash, Bubbles and their friends embark on adventures to explore the world’s undersea habitats, make new friends and learn about the many different ways life looks and lives in the ocean, celebrating the importance of diversity along the way.

Developed with an advisory panel of top marine biologists, digital media innovators and preschool educators, Splash and Bubbles is grounded in a marine biology curriculum that focuses on themes of diversity, individuality, interconnectedness and the celebration of learning and discovery. The series also introduces the concepts of ecological balance and the importance of taking care of the ocean.

“We are especially proud the MIPJunior World Premiere TV Screening welcomes such an inspiring series for children, celebrating learning, discovery and diversity. The quality of talent and experts associated with Splash and Bubbles, as well as the incredible production team involved, confirms MIPJunior is a premier choice for launching premium kids programming to an international audience,” commented Lucy Smith, Director of MIPJunior.

Splash and Bubbles will premiere Wednesday, November 23, 2016, on PBS KIDS. Created by John Tartaglia (Imaginocean, Johnny and the Sprites), Splash and Bubbles is executive produced by Lisa Henson and Halle Stanford of The Jim Henson Company, Julie Phillips and Merrill Puckett-Miller of Herschend Enterprises, as well as John Tartaglia, Michael Shawn Lewis and Jill Shinderman. Tom Keniston is producer and David Skelly is supervising director. The Jim Henson Company oversees all distribution and merchandising for the property; Herschend Enterprises administers all location-based themed entertainment rights, including live-shows. The series is funded in part by the Corporation for Public Broadcasting.

Organized by Reed MIDEM, MIPJunior will be held in Cannes on October 15-16, ahead of the MIPCOM global entertainment content market. The inaugural MIPJunior World Premiere TV Screening of Splash and Bubbles will take place on Saturday, October 15 late afternoon, at the Grand Hyatt Hotel Martinez in Cannes.