VFX supervisor Stuart Lashley oversees 200 shots for the third instalment of the God of Thunder franchise, including wormholes, fiery crashes and attacks, high-rise apartment views, and the vast wasteland of Skakaar. 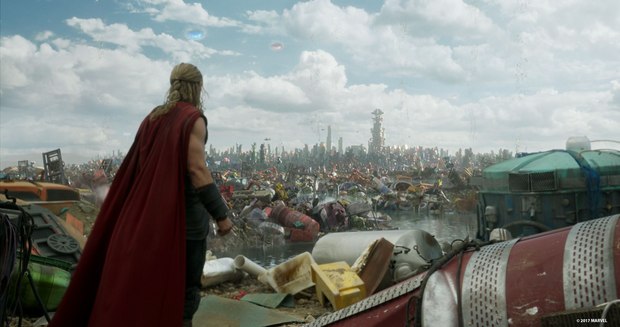 Described as a “visual feast” and “bonkers” by Marvel Studios VFX supervisor Jake Morrison (Ant-Man), Thor: Ragnarok is a cosmic road trip with the God of Thunder and The Hulk infused with the trademark spirit of improv and humor of director Taika Waititi (Hunt for the Wilderpeople).

Joining in on the fun was Double Negative VFX supervisor Stuart Lashley. “Taika always liked to get up, gesticulate and make sound effects to get across the desired feeling that he wanted to get out of our work,” he says.

The various stages of development work in parallel rather than linearly. “Changes happen quite a lot in Marvel films but it’s not necessarily a Marvel thing,” Lashley continues. “Directors have this huge toolbox that is available to them in visual effects. You want to give them the freedom to continue to create as far along in the process as possible.” Marvel Studios put a lot of effort into crafting that previs with the director. “It becomes an important reference for us to follow almost to the frame initially to get the basics and composition of the shot down into something that the director is already comfortable seeing,” notes Lashley. “Then we carry on from there embellishing and refining the shot.”

Double Negative was responsible for two sequences of about 200 shots in total. The most involved one has Thor flying through a wormhole, crashing onto Skakaar, getting attacked by the locals and Valkyrie. The other was an high-rise apartment view of Sakaar while Thor, Bruce Banner, and Valkyrie discuss their getaway plans as Loki looks on. “We came onboard fairly late and picked up a lot of assets from Framestore, which had done some work on Sakaar wasteland shots. Also, there were a couple of assets we grabbed from Digital Domain for reference,” Lashley says.

Wormholes have been seen a lot in cinema over the years, and each time they need to look different. “You go through the design process of trying to create something that feels otherworldly, is impressive and has a scale to it, but is not something that you’ve already seen in a movie,” Lashley observes. “The director and Jake had some references from supercell storms that they were keen to incorporate so we wanted to get a sense of that in there. We had two main wormholes that look different from each other. There’s a wormhole that Thor falls out of and the massive one that becomes their exit plan later on.”

Houdini was utilized to create the effects simulation. According to Lashley, “It was fluids and clouds effects with various internal staged lighting to try to give it a sense of volume.” Spaceship debris travels through the wormhole. “Once you establish some more recognizable objects in the scene, like hulls of spaceships and vehicles, then you can start to describe the scale of this thing better,” says Lashley. “Sakaar is peppered with all of these wormholes. They’re constantly spewing junk and rubbish into the wasteland. Taika wanted to see some massive pieces of debris coming out of those wormholes to show you that these things are huge.”

Various spaceships needed to be designed and dismantled for the debris. “There were some that were more bespoke that we created for the hero bits of debris. A couple of the crashed ships we built them up from scratch. There was certainly an amount of stealing parts, degrading them, and using a mix and match to efficiently maintain the amount of variation,” says Lashley.

“There was always the goal to keep things grounded in the real world with the lighting,” he continues. “We had a digital double of Thor when he is initially coming through the wormhole and for some wider shots where you see him crash-land. We tried to pick him out with lighting more than anything else. There was some scale cheating. We had to bring him closer to us because the scale of this wormhole is so big that you could easily lose him in there amongst all of the debris.”

The crash simulation was done in Houdini with rigid body dynamics. “The laying out of the wasteland was a back and forth between our environment and effects teams in order to be able to scatter the debris,” says Lashley. “We sectioned off an area of debris wide enough to encompass everything that needed to move for the collision impact.” There was quite a bit of art direction required for per shot. “The system was setup so we could pick, move, remove or add individual pieces until we had the desired visual.” Sakaar is a world populated with primary and saturated colors such as bright oranges, reds and greens. “To make any landscape interesting you need some variation in your terrain,” Lashley remarks. “The thing that we found when we first started blocking out the composition of these shots is as you scatter areas of land with junk it quickly becomes a wash of noise and visual information. We were able to use large areas of water, and did things like depth cuing, adding cloud shadows and little spots of sunlight to produce a textured pattern.”

A portion of the wasteland had been built and populated with different debris. “They had a section of the Scrappers’ dump truck craft built onset as well as part of Valkyrie’s ship. There was something practical to sit our work into for all of that which helped quite a lot.”

Previs was created for scene where the Warsong appears piloted by Valkyrie. “It changed quite a bit from the previs as we developed the animation and had feedback from Taika,” Lashley recounts. “We tried different ways of entering frame, spinning around, and landing until Taika had a favorite of those initial versions. We refined those to the point where they became what you see in the movie. The Scrappers are surprised by the entrance of Val’s ship and the dust getting kicked up helps sell that moment. It makes the landing so much more epic and impressive even though she’s a little bit drunk flying.”

Thor comes face to face with Scrappers who are then quickly vaporized by the guns of the Warsong piloted by Valkyrie. “As each one got shot they immediately turned into this cloud of material with bits of costume, ash and dust,” says Lashley. “We worked on the transition between the Scrapper that you saw a few frames before and this huge explosion.”

Valkyrie captures Thor by using a net. “No one was quite sure what the net was going to look like but it had to fit into the world and sell the idea of being some sort of technology that could suppress Thor. They shot a version of the sequence with a practical fishing net.” A different approach was taken. “There’s a technology that exists on Sakaar which is designed to suppress individuals called the obedience disk,” Lashley says. “It’s a device that sticks on the neck of Thor which allows Val to control him. We wanted to incorporate that into the net somehow. The net also had to feel formidable and made of solid material. We ended up going for metallic telescopic links.”

Heavy DMP work was involved in creating the view of Sakaar from a high-rise apartment containing Thor, Bruce Banner, Valkyrie and Loki. “Sakaar is quite a big place that has built up areas, it becomes more residential, and then goes out into the wasteland,” Lashley remarks. “We were lucky not to have to build it fully in 3D but took more of a 2D and 2.5D approach.”

The window was a green screen. “We had to add the window itself to sell the action of being behind the panes of glass. As post-production went on they wanted to embellish the décor of some of the interior sets in the movie. It was case of adding Sakaarian graphics on the walls to make the apartment feel more of another world.”

No major rewrites were required but some helper tools were created. “We had to work out the scattering process in order to manage the sheer amount of geometry that occurs once you start replicating and spreading hundreds and hundreds of bits of debris over the landscape,” notes Lashley. “Clarisse handles instancing and replication of geometry well. There was also the requirement to take that information and pass it into Houdini for the effects guys to be able to do their work. The scattering of debris didn’t become heavy until it was actually rendered which kept the scenes workable for the artists.”

There was a short turnaround for the project. “We had to hit the ground running in getting the design challenges approved and get those going as soon as possible, says Lashley.” The occasion when Valkyrie first appears stands out. “The Scrapper section is quite cool. It’s definitely a sit up moment. You’re either in shock that Val would dispatch a group of them so brutally or you think it’s a cool sequence. Either way it’s memorable.”