The 2017 VFX Oscar-nominated films showcase the versatility and range of visual effects artists. 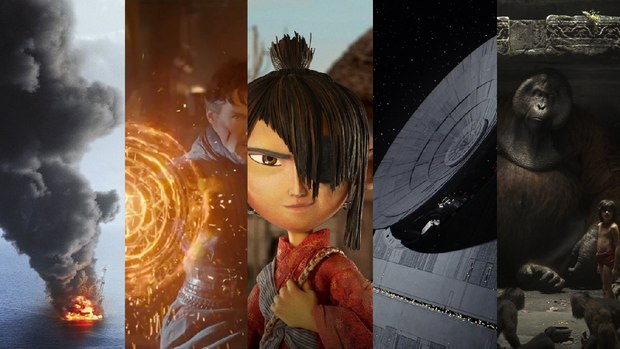 Here’s the fun thing about visual effects when it comes to handing out awards. The more invisible the effect and the more it blends seamlessly into the live action, the better – and the less likely Academy voters will know the effects exist. In fact, if the effects didn’t keep you glued to the screen, if the effects weren’t believable, the film would likely have bombed at the box office and certainly never have been nominated for an award.

But, if Academy voters can’t see the visual effects, how they vote for them?

That’s a dilemma all the contenders this year faced and might help explain why voters awarded past VFX Oscars.

Take last year’s visual effects Oscar winner Ex-Machina, for example. The visual effects were obvious, yet believable. They were artistic, beautifully accomplished, and let actor Alicia Vikander shine through. You could say the same for recent winners Interstellar (2015), Gravity (2014), and Life of Pi (2013), all of which were well-received films.

And the VFX Oscar nominees are:

Of the VFX Oscar nominated films this year, Kubo has the most Oscar cred with an additional nomination for Best Animated Feature. Rogue One and Deepwater Horizon each have a second nomination for sound. Does that matter? Probably not.

Last year’s nominee Star Wars: Episode VII – A Force Awakens, which won the BAFTA and VES awards for best visual effects that year, had five Oscar nominations, and visual effects that were perfectly blended into live-action footage. So, why didn’t it win the Oscar? Surely voters must have known the spaceships weren’t real. But, did they know the desert planet wasn’t? That effect was invisible, so perhaps not. Or, perhaps voters thought they’d seen these effects before and rewarded the uniqueness of Ex-Machina instead.

This year’s nominee Rogue One: A Star Wars Story might suffer the same fate. Voters have seen space battles before although never as complex or beautifully rendered. Will they know that most of rest of the film was shot on green screen stages? Will they understand how difficult it is, how state-of-the-art it is, to create close-ups of a digital Peter Cushing? Will they vote against a digital actor? Movie-goers certainly didn’t. Rogue One was the number one box office hit in the U.S. in 2016. VFX supervisor and Industrial Light & Magic chief creative officer John Knoll has six Oscar nominations and won an Oscar for Pirates of the Caribbean: Dead Man’s Chest.

Doctor Strange, Marvel’s entry in the VFX Oscar race, has stunning, artistic effects that couldn’t be real, at least not without mind-altering drugs. Like the folding buildings in the 2011 VFX Oscar winner Inception, and time expressed as a physical dimension in Interstellar, Doctor Strange takes the idea of bending real world objects into abstract ideas even further with bold, unique, effects that serve the story. But, the last superhero movie that won a visual effects Oscar was Spider-Man 2 in 2004 and oddly, that has been the only superhero movie to win a visual effects Oscar. I don’t know why. Maybe Marvel’s daring venture into crazy-cool visuals will turn that around. This is VFX Supervisor Stephane Ceretti’s second Oscar nomination. The Jungle Book, like Life of Pi, placed an actor in a fabricated world with CG animals, but The Jungle Book’s animals talk. The fantasy was so successful because the natural world created entirely with computer graphics was completely familiar and totally believable. The only thing “unbelievable” was that the visual effects teams could pull it off and help bring this much-loved story to life. As with Star Wars last year, The Jungle Book received the BAFTA and VES awards this year making it the odds-on favorite to win the visual effects Oscar this year. A win for The Jungle Book would give VFX supervisor and 2nd unit director Rob Legato his third VFX Oscar having previously won for Titanic and Hugo.

These three films have something in common: Disney. Walt Disney Studios Motion Pictures released all three critically-acclaimed blockbusters. The two outliers in the VFX race if you will, and some say the “sleepers,” are LAIKA’s Kubo and the Two Strings, a stop-frame animated feature, and Deepwater Horizon, an action-packed thriller filmed in a documentary style about a real environmental disaster. ‘Kubo and the Two Strings’

LAIKA Studios’ Steve Emerson, VFX supervisor for Kubo, makes a point that stop-frame animation is live action. The actors are tiny puppets, but they’re filmed (one frame at a time) on sets and green screen stages. Moreover, puppets have a long history in visual effects – think Willis O’Brien’s King Kong and Ray Harryhausen’s Jason and the Argonauts. In fact, Emerson claims that Kubo’s skeleton creature is the largest puppet ever animated. As in live action films, Kubo has digital extras, digital set extensions, and artistic digital environmental effects like water and fire that fit the aesthetic of the beautiful film. It would be most unusual, though, for a stop frame animated film to win the visual effects Oscar.

It would be nearly as unusual for the live action docudrama Deepwater Horizon to win. It would, in fact, be a first – unless you consider Titanic to be in that category and, I guess, it really is. But, while Academy voters would have known that the Titanic was an effect, would they realize that Summit Entertainment’s film about an explosion on an oilrig platform in the Gulf was actually filmed in three parking lots in New Orleans? There are practical effects and a set, and the face of the rig with the lifeboats was built. But, the terrifyingly real fire, which stars in 30 minutes of the film, is a digital effect as is the rig being consumed by the fire. And the water, except for a sequence around the lifeboats, is also CG. Industrial Light & Magic led the effects on this film, which gave VFX supervisor Craig Hammack his first Oscar nomination – and the studio’s second this year. ‘Rogue One: A Star Wars Story’

There is no honor for filmmakers quite like winning an Oscar, whether they work above or below the line. But for visual effects artists, an Oscar nomination, which comes via votes from their peers, from the people who truly understand the scope, difficulty, and quality of their work, is a validation they treasure. As well they should. Congratulations and good luck to all.