What’s the Buzz on Framestore’s Photorealistic VFX in ‘Man Vs Bee’? 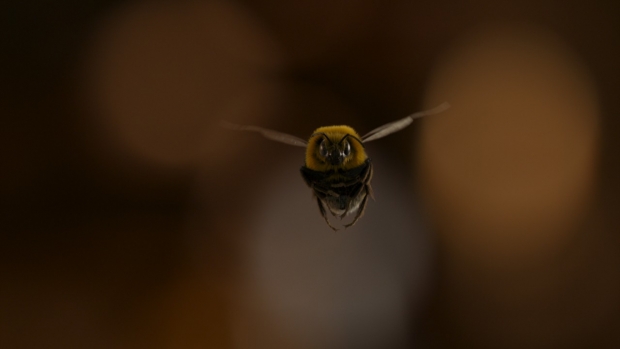 Running over nine episodes, Man Vs Bee marks the Netflix debut of star Rowan Atkinson, reuniting him with Will Davies and Chris Clark, both of whom worked with the British comedic actor on the Johnny English films. On the new series, Atkinson’s character, Trevor, enters into an unexpected clash with a plucky bumblebee while housesitting a mansion. And to bring the bee to life, leading visual effects studio Framestore combined comp, animation, and virtual production techniques to create some 600 shots in total for the series.

“Framestore and their work, as ever, was exemplary,” says Atkinson. “The show was conceived and produced during COVID-19, so its scheduling was extremely challenging. But Framestore could not have been more helpful to the production and diligent in their dogged pursuit of excellence. The results are astonishing.”

“Framestore gave us our co-star: a bee so beautifully animated and richly-rendered it seems every bit as real and characterful as its human counterparts,” says Man Vs Bee director David Kerr. "Rob Duncan and his team were wonderful collaborators. From the outset, we worked hand-in-glove, choosing a specific real bee as our reference; finessing animation so that every detail could imply the bee’s attitude to Trevor; and dreaming up ways the bee’s physicality could be transformed in reaction to Trevor’s attacks. The Framestore team worked not only on the bee, but on a host of other ambitious VFX shots. At every stage of the process, working with them was a joy.”

Framestore’s core team was led by VFX supervisor Rob Duncan, who has worked on two films with Atkinson: Mr. Bean’s Holiday and Johnny English Reborn. Alongside him were comp supervisor Ollie Bersey, CG supervisor Johannes Sambs, animation supervisor Binal Shah, and VFX producer Standish Millennas. Focusing on crafting the bee, they brought a full suite of VFX skills to the production both on set and in post, delivering 202 shots that feature the bee out of their 600-shot total.

The bee was only one inch long, which posed some interesting challenges. Duncan was keen to use stand-in bees on the shoot, which were controlled by a professional puppeteer. This enabled Duncan to direct their actions on set, and carry the spirit of the bee’s movement all the way through to the CG character later on in post. The puppet bee gave Atkinson the opportunity to react to something live on set, which would be really useful in achieving believable interaction in the final scenes.

“We had some bee proxies made and placed on the end of a fishing rod,” Duncan explains. “[That] sounds very simple, but it's got to behave like a bee, and when it's done poorly there can be a disconnect between what the actors are doing and how you are animating your character. So, I decided to use puppeteering.” “I’d done a lot of research into bees at this point, including how fast they move and how much they meander,” Duncan continues. “So, we had some basic ground rules locked in. And [since] the puppeteer was a performer, they were able to subtly manipulate the one-inch proxy and imbue a character into that.”

A big bulk of the asset build involved groom variations created by Sambs’ team and animated by Shah’s team. To ensure it always felt like an actual bee, however, they were careful to keep the character realistic, and refrain from over-stylization.

“We had a lot of different groom variations, because the bee is going through so many different scenarios -- which I think is one of the most exciting things about the job,” says Sambs. “It gets soaked in a shower, sucked up in a vacuum cleaner, blow-dried into a puff ball, and picks up all sorts of debris and particles along the way.”

“Part of the brief was that the bee shouldn't look menacing. But if you zoom into a bumble bee head, it becomes quite alien looking and creepy,” Sambs continues. “So, we had to find a way of maintaining realism, while also rendering a friendly-looking bee -- no matter how close up we are.” The groom variations helped convey a bit of subtlety and emotion without forcing the bee to do something that it wouldn't do otherwise in nature,” adds Shah. “In terms of animation, we didn't have a lot of reference for a sad bee, so we played around until we found a pose that looked like a forlorn bee, and it worked out well.”

The team also created some beefy effects, with one sequence involving Trevor luring the bee into a beehive which was rigged with explosives, leaving the bee looking the worse for wear.

“It was a chance to have a bit of fun and a valid reason to change the look of the character. We wanted to feel like it had sustained some damage, but nothing too life threatening,” says Duncan. “It was really up to us to come up with those looks, as they were not defined in the script. It seemed to be a good opportunity for us to add value to the character.”

From the outset, it was clear that there would be many dozens - if not hundreds - of shots requiring a CG bee. Accordingly, an investment was made up front to streamline the VFX workflow, so that finished-level shots could be turned around quickly and put in front of the filmmakers for their feedback.

“Generally, there's quite a delay between the various stages. But for this project we could animate a bee in the morning and see it comped in the plate by the afternoon, which helped create an efficient feedback loop," says Shah. One of the biggest tests the team faced was portraying the bee's point of view.

“There were a small selection of shots depicting the point of view of the bee in flight, which was photographed using a camera normally used for VR capture, with a 360-degree field of view,” says Bersey. “This allowed us in post to very carefully adjust where the bee was ‘looking’ as he flew around the house or the garden. This required quite a lot of look dev, which was all done in comp, to come up with a plausible representation of what a bee might see.”

For the car scenes, which involved Trevor driving and dodging traffic, the team looked to Framestore’s virtual production toolkit, opting to use an LED Volume, shot at 80six. This gave them increased flexibility, especially when it came to interactive lighting, and ultimately helped them support the actors' performance.

“LED work does bring an awful lot to a piece -- particularly in a car where you’ve got loads of chrome, interactive lighting, and reflections,” adds Bersey. “If you used a conventional greenscreen stage, you would really miss the detail.” Atkinson attended most of the team's reviews, with the majority of his feedback focused on the timing of the bee, down to the most minute level.

“It was a thrill and an honor to work with Rowan,” says Millennas. “He’s very experienced with the post-production process and understood the stages we needed to get through before presenting a finished shot, so he was happy to see work in progress and understand its potential. He is a master of physical comedy and has an extraordinary attention to detail, which pushed us repeatedly, in a good way.”

“Our reputation at Framestore is very much in creative character animation, and also in ensuring that those characters can behave exactly like the real thing if required,” adds Duncan. “We had to stay on the right side of the line of it being a believable insect, rather than a caricature. There is a real skill in understanding the difference between the two, and knowing when we're taking it too far and need to rein it back in.”

Man Vs Bee is now streaming on Netflix.