Weta Digital Soars with ‘The Falcon and The Winter Soldier’ VFX 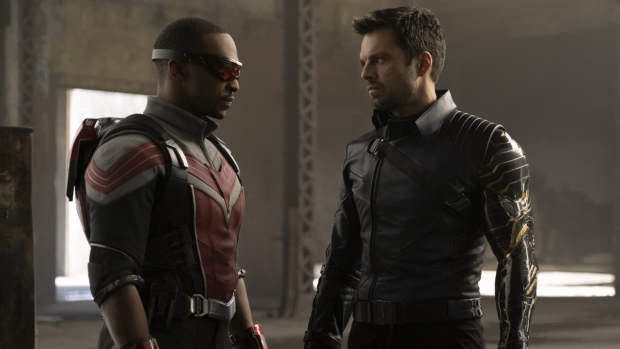 As one of the key VFX studios working through the pandemic on Marvel Studios and Disney+’s action-packed six-episode original MCU series, The Falcon and The Winter Soldier, Weta Digital was tasked primarily with the epic mid-air fight and canyon chase between The Falcon, a group of wing-suited bad guys, helicopters, and a C130 transport plane.

Weta got started early, as their work not only would highlight the series premiere but feature heavily in the first high-profile series trailer.  Their team was led by VFX supervisor Charlie Tait, who along with Eric Leven, Mike May, John Haley, Daniel Mellitz, Chris Waegner, Sébastien Francoeur, Chris Morley, and Mark LeDoux, was part of the group nominated for a 2021 Primetime Emmy for Outstanding Special Visual Effects in a Season or a Movie for their work on the Marvel Studios' show. The Falcon and The Winter Soldier show received a total of five nominations. “I started right before COVID struck, before the lockdown started in New Zealand,” Tait says. “We originally had about 150 shots for the canyon chase sequence in Episode 1. We knew we were doing the opening moments of the show, which were really important. We knew all eyes would be on it, and it had to be great stuff. We worked on it for a little over a year. We ended up doing a lot more shots, another hundred or so, which we picked up along the way.”

Within those initial 150 shots, Weta produced close-ups of The Falcon in flight, shot against bluescreen, which required a CG body replacement, depth-of-field and lighting changes, integration with the CG Canyon, and the addition of a fish-eye effect to look like GoPro footage. Skydiving and wingsuit plates required background and CG costume replacements, placing live jumpers into CG environments, as well as full CG shots including fully CG jumper doubles. Weta created a number of digital assets, as well as live-action and CG motion and integration on the C130 Plane shots. They also built The Falcon’s new “shield wings,” as well as entirely CG canyon environment that eventually grew to 30 kilometers long. The canyon environment is based on Paria Canyon that straddles the Arizona / Utah border. While there were no live-action shots of the canyon, Marvel provided the team with thousands of frames of invaluable reference from a helicopter shoot.

Weta’s work began by reviewing and reworking previs for the Canyon Chase, fleshing out story beats and animation, figuring out how to make the speed more feasible and add a greater sense of “jeopardy” for The Falcon within the scene.

According to Tait, “For the previs sequence we used to bid the work, they had already shot this material. A lot of it's the cool, exciting canyon chase, and who doesn’t like a canyon chase, you know? All that flying. And I thought, ‘Oh my God, look at those wire rig shots. How are we ever going to make that work?’  You know, I've seen it before… all sorts of things trying to make people fly. And you've got a closeup on them that begs an awful lot of questions. Like, how was this filmed? Who's holding the camera? What's going on in the real world? If you want it to look real, you have to take this stuff into account, because as the viewer, at least subconsciously, you’re thinking, ‘You know, that's not quite right. There's something about it.’”

After created needed assets, Tait’s team began redoing the animation, which when reviewed, clearly showed changes were needed, not just with story, but with how the character performed in the sequence. “As Marvel started making changes, one thing that came up was the sense of jeopardy,” he notes. “People were questioning why The Falcon was not catching up. We needed to make the chase more difficult for him. Increase the sense things might go wrong. That sense of jeopardy, like there’s a good reason it’s taking a while for him to catch up, or for them to get away. The helicopters intervene and start shooting at him. They fly through a very narrow crack that doesn't work for him with his big wings. These were thing we added when we redid the previs.”

The previs was reworked to reflect changes within the entire sequence, including storytelling, as well using a GoPro style camera on some shots. “If you look at shots of people skydiving, in wingsuits, it's rather comical,” Tait describes. “The head is very stable in frame because the camera's attached to it. And the rest of the body looks very small because the lens is so wide, and the body kind of wiggles around independently of the head. It looks slightly odd.”

For director Kari Skogland, those head shots were important. “You have to keep coming back to The Falcon and see what he’s doing… what he’s looking at,” Tait continues. “It can't just all be small, in-frame flying CG characters.”

“Once the flow of the sequence, the story, and the previs were more solid, and everyone was happy with it, I figured a really good exercise would be to work out the altitude for each part of the sequence,” Tait says. “How high are we? How long is it taking? How low are we at the end? How high are we at the beginning? During which beats are you losing height? Remember, the world looks really different from various heights, so that really had to be taken into account so we could make sure we were staging all our cameras and action at appropriate elevations. Obviously, we’re losing height the entire time. Working with a full length of the strip of canyon, the layout team created a kind of visualization of where the cameras were at, in which shots, in which parts of the scene. It was important to get the right height for things to look right.”

Regarding the canyon’s height, Tait adds, “The main detailed part of the canyon was made from height maps of the Paria canyon, which are freely available online.  The outer desert beyond the canyon tops was made from height maps of a desert in Libya.  Using height maps from real terrain gave us a realistic base upon which to build and add detail.  If we had tried to build it from rocky sections without this real topology as a base, we wouldn't have been able to create natural looking formations.”

Working from plates of Mackie, wing suiters, and skydivers, Tait’s team had to connect all the action within either partially or fully CG shots. “For example, they shot actors fighting inside a helicopter interior,” Tait explains. “We made a matching CG helicopter exterior into which we inserted the live-action interior with the doors wide open. There were a lot of shots like that. A lot of the high-altitude stuff with the wing suiters when they first jump, that’s live-action. And then, as we get into the canyon, they become animated. So, we made full CG wing suiters, integrating them as needed pretty much on a per shot basis.”

Another key area of Weta’s VFX work was the live-action and CG integration of Mackie’s head and body at various times and locations during the chase. For Tait, though this work wasn’t any harder than he anticipated, it was still quite challenging. “I knew it was going to be difficult, but I think it worked out beautifully,” he notes. “We had to replace his body and just keep his head. We had to do a perfect CG match move of him anyway, because we had to put CG wings on him. He was in his suit, hanging on wires, so we had to do the wings and a certain amount of paint work to connect that all up. When we started that work, the problem was that because the depth of field was a bit too shallow, the lighting was a bit flat, as it was overcast when they were shooting him. Some of the time it even rained, and it just wasn’t the look that we were going for. We needed it to be really bright and contrasty.”

“So, we made a CG match move of him, and then basically kept his face,” he continues. “We relit it using the lighting from the CG. So, all his body and his wings are all CG, so it would be sharp from head to toe. The head is still Anthony Mackie, but it's relit using the same lighting that's used on the rest of the CG. The best thing about it is when he moves relative to the sun, like rolling or diving, you see the lights roll around him, and it just looks so much more like he's in the world that you've created, which is crucial. It really makes all the difference. And of course, we've given that wider lens look, and sharp muscles on his back. It means that the background can be sharp, which is what GoPro footage looks like. That's the look we were trying for; if it was all blurred behind him, it doesn't really work.”

For the C130 sequences, Tait ran into the same problems as he did with the Mackie shots. The wire rig shots of Mackie landing on top of the plane were filmed at an Air Force base; the weather again wasn’t great, with gray, overcast skies impacting the lighting. “The plane is on the ground, so we had to get rid of its propellers, put spinning ones on, and get rid of its undercarriage, so it looks like it's flying,” he describes. “To do any of that work, you need a CG plane that lines up to the plate. So as soon as we'd made a C130 asset that looked exactly like the one shot live, we're at a point where we can just make it all CG.”

Mackie flying near and landing on the plane was done with a mix of CG and live-action. “As the Falcon flies in and approaches the plane, or when he's about halfway over the plane, he kind of transitions into live-action guy, who we relit using lighting from the CG to make it more contrasty. When he lands on the plane, that’s probably 80% CG. The nose and the cockpit where he lands… because he touches stuff, it casts shadows. So, he's really landing on a relit live-action plane. It looks fantastic.”

Tait concludes by sharing how working with VFX supervisor Eric Leven, who’d worked at Weta many years previously, was a real pleasure. “I’ve been at Weta 21 years, and we must've been there at the same time, though I don't think we ever worked together,” he says. “We got on very well. It was good fun. Because of the pandemic, we were never able to meet face to face, but I'd like to someday.”

He also notes that because their work was key to the first series trailer, the overwhelmingly positive response to its release was quite rewarding. “When the trailer came out, we saw the reaction on YouTube,” Tait shares. “It was amazing. It was just fantastic because we didn't really know if our work was good enough. Our job's all about trying to make it excellent. Isn't it? So, you're always questioning yourself. Is this good enough? Are they going to love it as much as we hope they will? And when we saw the reaction to that first trailer, it was fantastic. Really gratifying.”