Animation supervisor David Clayton shares how his team brought down the fire-breathing Rhaegal with a giant bolt, and Crum the giant wight with a small knife, in HBO’s hit action-adventure series. Animating creatures has become a tradition for Weta Digital animation supervisor David Clayton, who’s had a busy year working on both Rampage and Season 8 of Game of Thrones. “I’ve typecast myself as the monster/creature go-to guy here,” he laughs. “But, on Game of Thrones, there was a full gamut of animation requirements. Dragons, obviously, but then you work your way down to lots of crowd simulations, arrows and wights as well as animating realistic looking boats done in a way where we could duplicate them out hundreds of times for fleet shots.”  Overall, Weta was responsible for 600 shots featured across all six episodes of the hit HBO series’ final season, including key sequences felling the dragon, Rhaegal as well as the tragic fight between the giant, Crum, and Lady Lyanna Mormont. In total, half of Weta’s shots were devoted to the Battle of Winterfell, which takes place in the third episode titled “The Long Night.”  “We fell back on our tried and true tools, like motion capturing little battle vignettes and using our Massive simulation software to multiply those out to hundreds and hundreds of charging Dothraki,” Clayton explains. “In a sea of a thousand people, you won’t pick up much detail, but you’ll notice repeated patterns or movements.  But thankfully, with Massive, you can introduce all manner of variations into the timing and poses, and source different run cycles.” The sequences were aided by work Weta did three years ago turning a motion capture session using horses into a library of gallops, trots and canters. “In this case, we needed to hit a certain horse stride speed. So, we had to make sure that the cycle itself was fast enough, looked realistic, and had the right tone. Also, we were intercutting with a lot of live-action shots of horses charging, so we looked at those to get a good match.”

During the Battle of Winterfell, fan favourite Lady Lyanna Mormont (Bella Ramsey) has a fateful encounter with the wight giant known as Crum. “That was quite a delicate sequence to put together because you had a live-action human character, Lyanna, and Crum, who is also mostly live-action,” Clayton shares. “They shot with various scales using different camera moves and we had to assemble them together.  At first, we thought about assembling the shots of a motion control background, a giant and a girl in compositing. But it soon became clear that in order to put them together and make them feel connected, we had to use a CG hand for Crum.  Crum needed not only to hold Lyanna, but really crush the life out of her while squeezing her armour.  Those shots became quite finicky to get feeling right, picking the moments to crush a bit more in time with the actress’ performance.  Interestingly, when Lyanna does stab Crum in the eye, we largely replaced her body with a digital double to provide more ‘oomph’ into that stab and make her legs feel more dynamic.  It was important to give her final moment a heroic boost because everyone loves the character and wanted to see her go out in a brave way. Lyanna is largely digital when Crum disintegrates, and she falls to the ground along with his hand.” Another dramatic death involved Rhaegal, one of Daenerys’ two remaining dragons, who is felled by gigantic metal arrows launched from a fleet of warships commanded by Euron Greyjoy (Pilou Asbæk).  “Lots of iterations to be done there, as that shot was an oner, though it actually started out as three shots,” Clayton reveals. “That was a great exercise in pulling all of the work that we’d done to date together in one shot and then trying to find a camera move that supported all of that action and highlighted the right moments.”  The Weta team took a grounded approach for the camerawork, treating it as if the footage was shot utilizing a glider or helicopter.   “As Rhaegal starts to succumb to these bolts piercing his body, we made sure that he came right past camera so you would get a good look of his anguish, pain and all of the spurting blood,” Clayton says. “Getting the right timing was critical in conveying the proper weight and scale.  When the bolt hits him in the neck, it can quite quickly absorb that impact but then there’s a ripple effect up towards the head.  If that takes a few more frames than you are anticipating, it’s going to make him feel big.”

Mortally wounded, Rhaegal crashes into the water. “It’s shown across two shots,” Clayton continues. “There’s one over the shoulder point of view from Tyrion Lannister [Peter Dinklage] who is in a nearby boat, and another from Daenerys Targaryen [Emilia Clarke] which is elevated looking down.  They are two reverse angles.  But what we did at the request of our effects department is make sure there was a continuous piece of animation that served both of those shots.  In other words, they could do one high resolution water simulation that would work across both of those shots rather than two individual ones.” 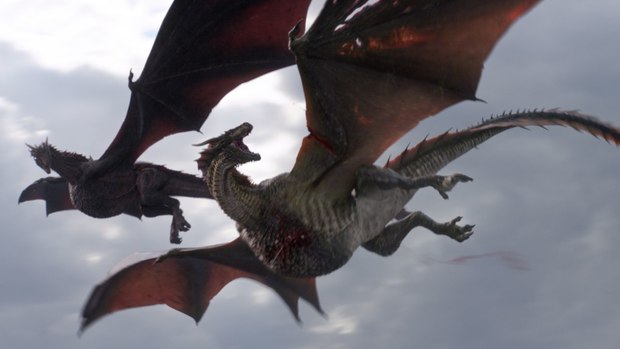 Weta developed technology for the show that combined fire and water simulations and rendered both the CG and plate element dragon fire with ocean water and ship explosions. “What we did, at [Weta VFX supervisor] Martin Hill’s request, in order to aid in the production’s efficiency, was create 500 frames of boat animation where they rolled in the waves, starting from small and ending with a lot of motion,” Clayton states. “We had a set kit of animation that we could use to populate plates. Once that animation was established, we could do high resolution sail and wave simulations in the water that would follow that boat.  We had all of the parts needed to populate a hundred ships and offset them all anywhere from 100 to 400 frames.”

Ship destruction proved tricky to produce. As Clayton describes, “You’re not only dealing with fire effects and destruction of the boats, but also water surging and steaming up. In a way, it was forgiving because we animated the boats with the right timing using just a couple frames of implied destruction. Then they were consumed by flames and water. But even so, that doesn’t mean we didn’t put in all of the details of masts snapping and digital doubles abandoning ship!”

One challenging sequence called for animating two different flying creatures: dragons and ravens. “There was a shared shot where we animated the dragon and ravens,” Clayton notes. “Bran Stark [Isaac Hempstead Wright] sends his ravens off to find out where the Night King is. It’s this long camera that swoops over the battlefield with the wights surrounding Winterfell, goes over the rooftops, elevates up into the sky, wraps around the dragon and finds the Night King. All the while, there are 30-odd ravens flying out of frame.  We picked three or four hero ravens that were always in frame and got buy off in terms of their flap motions and composition, then built out from there. Animator Craig Penn setup a nice rig where the ravens would always follow the camera without looking glued to it, which is a big no-no. You need to make sure that things look independent from the camera.” When surveying the breadth of studio work on the show, Clayton notes that depicting Rhaegal’s aerial fight sequence was the most challenging. “The death of Rhaegal was the biggest challenge for us,” Clayton reveals. “We got to take the process all the way through from start to finish. We began with some previs, but from there, did a pre-animation pass to make sure that the cycles were all correct, that the paths were good, and the camerawork was how they wanted it.  Then, we were able to send our camera and dragon buck information to the client so they could program that into their motion control rig and shoot Daenerys riding that buck.  This meant that when we got the live-action footage, it was a one-to-one match, so we could place her on our CG dragon and her movements were all legit. We even went to the detail of having grips blocking the light at certain times with big cards so it implied the shadow of Drogon’s wings lifting up and down.  You get this nice authentic looking live-action plate that is slotted in with animation that you already know is going to work.  It was a great process.  From there we got to add all of the lovely details and kill one of the major characters in Game of Thrones.”

Wrapping Up Loose Ends in ‘Castlevania’s Fourth and Final Season
From K-Pop to Cajun: The Musical Mix of ‘Kipo and the Age of Wonderbeasts’
How Courtney and Ryan Lofty Compose for ‘Fast & Furious: Spy Racers’
Get Ready to ‘Chicken Charge’ in Disney Junior’s ‘The Chicken Squad’
Sci-Fi Ambient Minimalism: ‘Blue Moon Frequency # 2b [Spring Mix]’ Music Video
‘Your Career in Animation: How to Survive and Thrive’ Now Available
Creating a More Human Kong in ‘Godzilla vs. Kong’
Surreal and Psychedelic: The Foo Fighters ‘Chasing Birds’ Music Video
END_OF_DOCUMENT_TOKEN_TO_BE_REPLACED